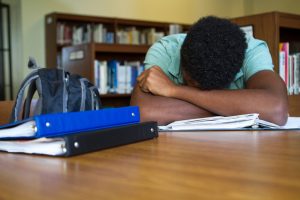 Given that the transition from adolescence into young adulthood is often marked by normal emotional ups and downs, it can be difficult for parents to identify symptoms of mental health issues. Especially after puberty, adolescents experience a variety of changes, both behaviorally and psychologically. They also experience mood swings that can seem severe, depending on the day and the circumstances.

So what should parents be aware of? What should they watch for? Some broad signs that indicate an adolescent’s mood or behavior could be problematic include:

Some of the most common mental health diagnoses among adolescents are depression, anxiety, attention-deficit hyperactivity (ADHD), and eating disorders. Let’s take a closer look at these issues and explore their symptoms.

Common symptoms of depression in adolescents are irritability (generally more so than sadness), anger, hostility, and melancholy. Adolescents often have somatic symptoms such as headaches or stomachaches when depressed. Other symptoms to look for are low self-esteem, chronic fatigue, apathy, lack of concentration, emotional dysregulation, and thoughts of suicide. It should be noted that adolescents and young adults can also display symptoms of bipolar, a mood condition similar to depression but with the addition of mania. Mania can manifest as an extreme elated mental state, such as feelings of euphoria, lack of inhibitions, racing thoughts, little to no need for sleep, excessive talking, and risky behavior.

Anxiety can manifest as panic (or panic attacks), posttraumatic stress (PTSD), obsessive compulsion (OCD), social anxiety, or phobias. Parents should take note that PTSD often presents as severe fear of people, places, or things, and can also be diagnosed as phobias, while obsessive compulsion typically manifests as consistent thoughts of an image or impulse. Young adults with anxiety can appear fearful, withdrawn, and emotionally dysregulated.

If you suspect your child or adolescent may have one of the conditions above, it is imperative to seek professional help as soon as possible.

To identify possible ADHD, parents should also watch for the child or adolescent not being cognizant of their actions, disorganization, a lack of focus, disruptive behavior, and becoming easily bored. The most significant symptom of attention-deficit hyperactivity, in my opinion, is a lack of impulse control. This can manifest as engaging in behavior that seems obviously (to everyone else, anyway) inappropriate. When an adolescent is asked, “Why did you do that?” the answer is often, “I don’t know” or “I wanted to.” In my work with adolescents diagnosed with ADHD, the ability to think through the consequences of a given behavior is often not present. I have worked with adolescents who had ideas that were quite brilliant; people diagnosed with ADHD are often extremely bright and creative. However, when they attempt to execute those ideas, the consequences of not asking permission or crossing boundaries are typically not considered.

Eating disorders may include bulimia nervosa, anorexia nervosa, and body dysmorphia. Typically, adolescents with eating disorders aren’t just dieting and exercising to maintain weight. Bulimia is defined as binging and purging to avoid calories being consumed and potential weight gain. Anorexia manifests as eating significantly small amounts of food or no food at all, which can be extremely dangerous or even fatal. Symptoms to watch for are dissatisfaction with the way the adolescent looks, sudden and/or extreme weight loss, going to the bathroom right after eating, fear of weight gain, and a frail or thin appearance.

If you suspect your child or adolescent may have one of the conditions above, it is imperative to seek professional help as soon as possible. Depending on the diagnosis and the severity of the issue, treatment may include cognitive behavioral therapy, family systems therapy, and/or medication.

Prompt treatment can prevent a plethora of future problems for adolescents transitioning into adulthood. Adolescents often feel ashamed or embarrassed about their feelings or concerns and thus don’t reveal them. As a parent, that’s where you come in. The fallout for adolescents not receiving appropriate treatment may include low self-esteem, substance abuse, and thoughts of suicide, and can impact various areas of their lives, such as academic performance, work performance, friendships, romantic relationships, and family relationships.

Identifying mental health issues in adolescents can be complicated because it can be hard to delineate potential problems from normal mood and behavioral fluctuations. The key is the severity and duration of the behavior and to what degree it is getting in the way of the adolescent’s ability to function. Behavior that indicates a possible mental health issue is present will typically increase in severity, duration, and disruption in the life of the adolescent over time.