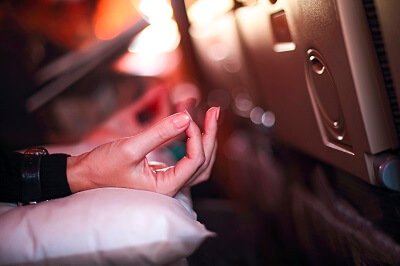 Panic is the most extreme form of anxiety. A person experiencing panic may feel terror, confusion, or behave irrationally, often as a result of a perceived threat, for example, a natural disaster or the possibility of a plane crashing. Panic can sometimes result in panic attacks, and panic disorder is a condition characterized by the fear of experiencing a panic attack, especially in a public place. Those who experience frequent panic attacks or fear the onset of an attack may wish to speak to a therapist.

A panic attack typically comes on suddenly. While it may be precipitated by overwhelming stress, a panic attack is unpredictable, although the anxiety that climaxes in panic may have been present for a long time. They generally last only a short while (5 to 30 minutes) and may occur only once in a lifetime or as often as several times each day. Attacks often have an obvious trigger (a frightening event, place, person, or memory, for instance), but they may also seem to occur for no reason, although most therapists believe that panic attacks do generally have an explanation that can be discovered and addressed.

What causes panic attacks is not clear, but it is believed that some individuals may have a genetic predisposition to panic, and that certain stressors in life can also contribute by triggering panic attacks. They can also be caused by medical conditions such as mitral valve prolapse, hyperthyroidism, hypoglycemia, or medication withdrawal. The use of stimulants such as amphetamines, cocaine, and caffeine can also lead to the development of panic attacks in some individuals.

Often frightening and upsetting, a panic attack can produce sudden, extreme fear and discomfort and can be otherwise physically intense and overwhelming. Panic attacks usually include some of the following sensations and experiences:

Panic attacks are relatively common, and about 30% of people have had at least one panic attack in their life. Because of the severity of physical symptoms, many people go to the hospital thinking they are having a heart attack when they have their first panic attack.

Although panic attacks seem to come on suddenly, people can sometimes anticipate them. An individual diagnosed with panic disorder, for example, may experience both expected attacks and unexpected attacks, but for the condition to be diagnosed, both unexpected, recurrent attacks and a persistent fear of attacks occurring are necessary. People with other anxiety issues or posttraumatic stress (PTSD) may also regularly experience panic attacks.

According to the Diagnostic and Statistical Manual, recurring panic attacks may lead to a diagnosis of panic disorder, especially when a person experiences anxiety and worry in between attacks, living in constant or near-constant fear of having another attack for at least one month following an attack. This fear often interferes with daily functioning, as an individual may come to avoid all situations that have the potential to bring on an attack. Fear of panic attacks may lead a person to change jobs, spend less time in the pursuit of leisure activities, and experience a decline in emotional and physical health.

Sometimes this fear leads to phobias, such as agoraphobia, which is the fear of being in open places or crowds where one might experience a panic attack and not be able to find help or easily escape. Extreme fear of panic attacks may result in agoraphobia if the condition is left untreated. Agoraphobia is believed to develop as a result of panic attacks, and may lead a person to stop leaving home entirely.

Panic disorder generally develops in early adulthood. It affects about 6 million American adults, or 2-3% of the population, in a given year and is twice as likely to occur in women than in men.

Why Is Panic Concerning?

Panic attacks and diagnosed panic disorder are considered to be highly treatable conditions, yet many individuals may not realize they have a real condition, or they may be afraid to seek treatment due to embarrassment or fear of being told that their symptoms are only imagined. Some individuals do not know what is causing the symptoms of a panic attack, and they may seek medical attention again and again, fearing an asthma attack or heart attack.

When panic attacks are left untreated, a person may develop agoraphobia and may become unable to leave home, which may have a significant impact on both an individual's finances and social life. Studies have shown that individuals who do not receive treatment for recurrent panic attacks may be more likely to:

A panic attack is generally not an immediate threat to one's physical well-being, unless an additional underlying health condition is present, and knowledge of this fact may help relieve the anxiety of some individuals. Information about their condition and reassurance that they are not "going crazy" may also help some individuals, and giving this information is often the first step of therapists who are treating individuals for panic.

People who have frequent panic attacks, especially those who find their activities limited by fear of a panic attack, may benefit from speaking to a mental health professional in order to address their anxiety. There are many types of therapy that are suitable for addressing anxiety and any underlying issues. Cognitive behavioral therapy, for example, can help a person understand behaviors and ways of thinking that might contribute to the development of an attack and change these patterns to help prevent attacks and reduce their severity. A therapist might also recommend exposure therapy. In this type of therapy, the person in treatment is exposed to the sensations that accompany panic, one at a time, in a controlled environment so that effective ways of coping with those sensations can be learned. Individuals who have developed agoraphobia are encouraged, as part of treatment, to face open spaces and crowds until they begin to feel more comfortable in them. Support groups may also be beneficial to some.

Anti-anxiety/anti-panic medications or benzodiazepines may be useful at treating the symptoms of a panic attack, especially on a temporary basis, but because medication cannot treat what is causing an individual to experience panic, most therapists do not recommend medication as the only form of treatment.

Other strategies that may help people cope with panic attacks on their own include relaxation techniques and realistic thinking.

There are many treatments that can help reduce the effects and severity of anxiety, which relates to panic, and issues that cause an individual to experience anxiety or panic.

Coping with a Panic Attack

In the middle of an attack, focusing on breathing and getting to a safe, private space can help the attack subside. Releasing physical tension and relaxing one's muscles can help, too. Panic attacks are not dangerous and usually go away on their own, but can pose a danger if the person is driving or engaging in other dangerous activities when the attack hits. It can also be helpful to think realistically, instead of either overestimating the dangers of a panic attack (fainting, dying, experiencing a heart attack) or catastrophizing the dangers (embarrassing oneself in public, not receiving help). To challenge these types of thinking, a person might write out any fears or imagine the worst possible scenario that a panic attack could lead to and then plan a way to cope if it does occur.

Stress management is also vital in combating panic attacks. Many people have panic attacks when they grow so overwhelmed with stress that they simply cannot cope, but talking about stress and getting regular breaks and leisure time can help mitigate the damaging effects of chronic stress. Remembering that a panic attack is not likely to cause one to faint, lose control, "go crazy," or die may also help some individuals relax and deal with panic attacks more effectively, when they occur.