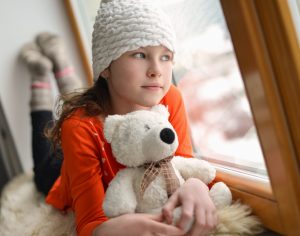 At an age when human development can be awkward and challenging, a large number of children are additionally burdened with their parents’ divorce and resulting implications. Parental strife, parent-child conflict, familial and residential changes, financial problems—these factors and more can create the perfect storm of adolescent angst. As divorce affects every person differently, it also affects developmental age ranges differently. Even as they transition toward independence, adolescents continue to be caught in the upheaval and end of their families as they knew them.

Although the groundbreaking 25-year study by Wallerstein and Lewis (2004) is now 12 years old, its findings are still relevant today. Divorced children of all ages eventually reach a conclusion that terrifies them: personal relationships are unreliable, and even the closest family relationships cannot be expected to hold firm. This realization creates a shaky foundation that adolescents then use as a touchstone and reference when making their way in the world.

As further noted by Wallerstein and Lewis, two-thirds of the children they studied experienced multiple marriages and divorces, plus the unrecorded broken love affairs and temporary cohabitations of one or both parents. Fewer than 10% of the children had parents who established stable, lasting second marriages in which the children felt fully welcome and included. The frequent discrepancy in the post-divorce adjustment of their parents was also a source of deep distress to the children well into adulthood.

It makes sense, then, that the turbulence and resultant pain associated with divorce creates a barrier for adolescent children of divorce to feel stable and hopeful. When adolescents see their parents divorce, there may be either a sense of “it won’t happen to me (when I’m an adult)” or “all relationships end up broken, so I won’t even try.” Which is why, as noted in the study, divorce is not an acute stress from which the child recovers, but a “life-transforming experience” (Wallerstein and Lewis, 2004).

Often, a dramatic change in family structure accompanies divorce. Logistically, one parent must leave the family home. This parental absence creates an absence in the child’s life that is irreversible. Although adolescents are moving toward independence, the parental role is far from minimized at this age. Adolescents accustomed to two parents typically come to rely on them as moral guides, support systems, and physical presences in their lives. As written by Marquardt (2005), almost two-thirds of divorced children felt they lived in two families and inherited two worlds in which to grow up. This sense of division can be challenging if there are two sets of rules and standards to balance. It is almost as if children become travelers into the newly adopted lives of their parents, but without a road map to navigate the pathways.

Divorce also may bring about an enormous reallocation of money. Some researchers have suggested that the economic hardship custodial parents face following divorce is the critical factor in predicting children’s post-divorce adjustment. Dramatic losses in income may contribute to additional life stresses such as moving to a smaller residence in neighborhoods with increased crime, lower quality schools, and loss of familiar and developed community supports. Lower income also forces many custodial parents to work additional hours to cover basic necessities and bills. Financial strain, by the way, is one of the strongest predictors of depression in single parents.

Another significant aspect of divorce includes child support. Even though parents have been supporting their children financially since birth, the divorce and resultant child support payments create the illusion children are now a mandated financial obligation, like a loan or a bill, which may become a contentious battle if payments are withheld or missed.

Overall, according to Wallerstein (2004), adolescents from divorced homes acted out more than adolescents from intact homes. Twenty percent of girls in the Wallerstein study had their first sexual experience before age 14, and over half were sexually active with multiple partners during high school. As noted, it isn’t the sex itself that was relevant; it was the attention received. Divorce creates a void, and adolescents test themselves and their parents with their choices to fill it.

While divorce is often inevitable, its implications are far-reaching to all involved. Adolescents are particularly affected given they simultaneously want independence while needing nurturing and guidance. If parents are divided and conflicted, adolescent angst may be intensified, potentially causing lifelong issues.