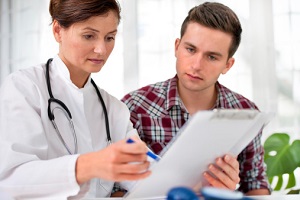 Diagnosis can refer either to the process of classifying symptoms or to the assessment of health or illness that results from the process. Obsessive-compulsive disorder, cancer, and diabetes are examples of the latter, while listing a client’s symptoms and comparing them with symptoms listed in the Diagnostic and Statistic Manual is an example of the former.

Role in Psychology
Not all psychological treatment requires practitioners to make a diagnosis. For example, a couple in therapy can benefit immensely from couples counseling, but neither member may actually have a diagnosis of a mental illness. However, most insurance plans in the United States require that clinicians make a diagnosis before the insurance will cover mental health treatment. Thus many practitioners diagnose mental illnesses based upon a client’s symptoms.

Diagnostic Process
The diagnostic process varies greatly depending upon the specific condition or illness in consideration. Some mental health conditions can only be diagnosed by surveying symptoms, while others–such as traumatic brain injury–have a clear physical cause that can be identified through physical tests. Therapists may ask clients questions about their daily lives, ask clients to fill out surveys, or talk with third parties such as parents and spouses to formulate an accurate diagnostic picture of the person. Diagnosis of mental illness is at least partially subjective.