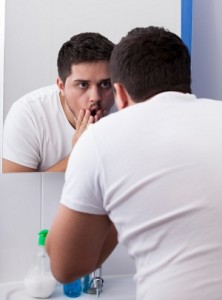 What do you do when you feel bad? You may clean your house, take a walk, or binge on sweet or salty foods depending on who you are and what habits you’ve developed. Does whatever you do make those bad feelings go away? If so, for how long?

Your feelings – good, bad, or ugly – represent your reactions to experiences. When you disown feelings, you disown yourself. This hurts your self-esteem. Let’s take a closer look at why.

By definition, you can not esteem someone who you are unfamiliar with. Self-esteem requires some knowledge of who you are and what you’re about. In other words, to have healthy self-esteem, you need a measure of self-knowledge. The more aspects of yourself you are aware of, the better you know yourself.

When we try to avoid to feeling the way we actually do,we are performing a kind of psychological gymnastics. We are maneuvering around inside ourselves in an attempt to distance ourselves from the pain. Cutting ourselves off from the pain rejects the part of us that is feeling pain. It’s a sacrifice similar to cutting off a leg caught in a trap in order to save the rest of our body.

Nobody wants to feel badly, which is why we try so hard to feel happy most of the time. When we can’t avoid feeling unhappy, we often try to contain any damage by “getting over it” quickly, or trying to talk ourselves out of an underlying feeling of loss. Some common examples are:

This is adaptive behavior that attempts to minimize emotional pain. Unfortunately, such attempts sometimes succeed too well in the long term. We isolate our hurt selves. We become fragmented in the process and keep ourselves from the healing we need.

At a deep level, we are aware of this banishment of our hurting selves. We know that we’re keeping something from ourselves. This knowledge itself must be hidden. Losing connection with the pain worsens as we lose trust in ourselves. There are too many secrets. We might even have lost self-respect because of what we dimly perceive as a lack of courage. We are afraid to repair the rift and invite all those suppressed feelings back into our awareness.

Feeling separated from ourselves erodes self-esteem, just as a collection of “No Trespassing” and “Keep Out” signs might erode the goodwill of one’s neighbors. Self-esteem requires that we embrace every aspect of ourselves. We need self-awareness and self-acceptance to feel whole. What many call “wallowing” is an opportunity for both awareness and acceptance of ourselves. Constructive wallowing is not for the weak or the idle. It takes courage and fortitude.

True wallowing is not like sinking into a warm bath; it’s more like getting a bikini wax. If you want the smooth results, you’ve got to endure the uncomfortable process. Just as it’s said that there’s a price for beauty, there is also a price for self-esteem. If it were easy to come by, more of us would have it. The price of self-esteem is full awareness and a willing embrace of our emotional pain.

Only by fully experiencing our pain can we reunite with the cut-off parts of ourselves that carry our deepest hurts. Through allowing ourselves to have our true feelings without self-criticism, we can know our whole selves and experience the courage of our intent to be who we are. This is the essence of self-esteem.

© Copyright 2010 by By Tina Gilbertson, MA, LPC. All Rights Reserved. Permission to publish granted to GoodTherapy.org.