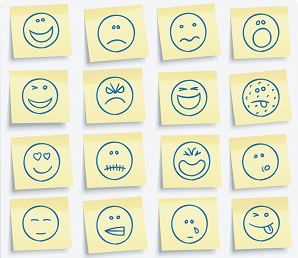 Emotion is a subjective state of mind. Emotions can be reactions to internal stimuli (such as thoughts or memories) or events that occur in our environment.

Emotions are not the same thing as moods. A mood is a state of mind that predisposes us to react a certain way. For example, someone in a low mood is more likely to feel irritated when they trip on a rock. Someone in a good mood is more likely to feel amused by the incident. In general, emotions are reactions to an event, while moods are present before and throughout the event.

Emotions by themselves are neither good nor bad. They are simply reactions. However, the way we act (or don’t act) on our emotions can strongly affect our well-being.

Because emotions are subjective, people often disagree on how to categorize them. Some people claim humans only have six basic emotions. Others argue we have up to 34,000 unique types of feelings.

One common way to categorize emotions is through Dr. Robert Plutchik’s emotion wheel. Plutchik arranges the eight basic emotions in a rainbow wheel. Each emotion is placed directly across from its “opposite”, like so:

Emotions in the Body

Our emotions are controlled by a group of brain structures called the limbic system. The limbic system releases chemicals which spur on our emotional states. The type of emotion we feel depends on which chemicals have been released. For example, the hormone oxytocin allows us to experience feelings of love.

Emotions not only reflect our mental states—they also alter our body chemistry and functioning. For example, when we feel fear, our sympathetic nervous system activates. Our pupils dilate, our heart rate goes up, and we may start sweating.

Conversely, our bodily states can also affect our emotions. If you are angry or afraid, you can take deep breaths to activate the parasympathetic nervous system. This system slows your heart rate and helps you calm down.

Cross-cultural research suggests each emotion manifests differently in our body. In one 2014 study, participants were exposed to words, stories, or facial expressions intended to prompt a specific emotion. They were then asked to color in parts of their body that they felt were increasing or decreasing in activity.

Each type of emotion left its own unique “blueprint” on the body. For example, anger caused one’s head, chest, and arms to greatly increase in activity. In other words, participants tended to breathe heavily, get sweaty palms, and develop flushed faces. Meanwhile, people experiencing disgust reported more activity around their throat and abdomen (likely reflecting nausea). Happiness was the only emotion which caused the entire body to have an increase in activity.

Certain emotions may be named in some cultures and unnamed in others. Here are a few examples of emotions which don’t have direct translations in English:

Why Do We Have Emotions?

Throughout history, philosophers have pondered whether humans truly benefit from emotion. There are many cases in which strong emotions cloud our judgment and make us do things we later regret. Would it not be better to operate purely on logic?

However, many researchers believe humans typically benefit from having emotions. In the past, our emotions motivated us toward certain survival strategies. Each basic emotion had its own purpose. For example, when our ancestors encountered a dangerous animal, fear prompted them to run away to safety. If they encountered an obstacle on their way home, anger motivated them to get rid of the problem instead of giving up. And upon arriving safely at home, feelings of joy would reinforce the behaviors that aided their survival.

That said, there are times in which emotions cause more problems than they solve. People with clinical anxiety may become paralyzed by fear rather than motivated by it. Individuals with depression can feel so much sadness that they lose the ability to feel joy. Even people without clinical diagnoses can become overwhelmed with emotions.

In many cases, a compassionate counselor can help individuals control distressing emotions. In therapy, individuals can learn how to recognize when feelings are clouding their judgment and bring those emotions down to a manageable level. They may also learn healthy ways to cope with these feelings.

If intense emotions are affecting your ability to enjoy life, you can find a counselor here.