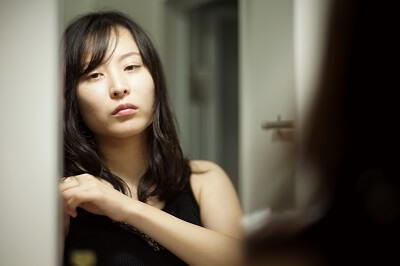 Self-criticism, or the act of pointing out one’s perceived flaws, can be a healthy way to increase self-awareness and achieve personal growth, but it may also prove a barrier to one’s self-esteem and peace of mind. Self-criticism may often help facilitate the process of learning from one’s mistakes and can also be helpful when one attempts to overcome areas of weakness or unwanted habits.

A high level of self-criticism that prevents individuals from taking risks, asserting opinions, or believing in their own abilities may be unhelpful or detrimental to well-being. Those experiencing these effects may wish may wish to address the reasons behind excessively self-critical tendencies with a therapist or other mental health professional.

The Levels of Self-Criticism Scale, developed in 2004 by Thompson and Zuroff, measures the two types of self-criticism: comparative and internalized. Comparative self-criticism typically involves comparing oneself to others and finding one’s self to be lacking. People who are self-critical in this way often tend to base their self-esteem on perceptions of the way others feel about them and may view other individuals as superior, critical, and/or hostile. Operating under the belief that one is viewed in a negative way may lead one's self-image to adapt to reflect this perception.

Internalized self-criticism, on the other hand, may involve the feeling that one cannot possibly live up to personal ideals or standards or the belief that one is deficient in some way. Thus, even success may be viewed as failure. For example, an individual who has a high level of internalized self-criticism may receive an A- on a test and still feel unsuccessful, believing that anything less than perfection constitutes failure.

Self-criticism is typically experienced as negative internal thoughts about one's self or, more specifically, about one’s behaviors or attributes. When self-critical thoughts apply broadly rather than focus on a particular behavior, they may be more likely to impact well-being negatively.

The above statements do not focus on any particular behavior that can be improved upon. Rather, they apply a negative mindset in an all-encompassing manner. Therefore, they may be more likely to affect confidence and contribute to the development of both physical and mental health concerns.

These statements, on the other hand, focus on a particular aspect of behavior that an individual wishes to improve. They are constructive rather than simply negative. This type of criticism is often more likely to lead to improved behavior and modifications of perceived shortcomings.

How Do Self-Critical Tendencies Develop?

Excessively self-critical thoughts may often have their roots in negative experiences with caregivers in childhood. Studies on relationships and the attachments formed between parents and other primary caregivers show that the earliest bonds in life often have a significant effect on a person's future relationships as well as a person's sense of self. When parents give children autonomy, encourage them to attempt things for themselves, and allow them to make mistakes without censure, children are more likely to develop self-confidence and grow up with a sense of security regarding their own choices.

Authoritarian parenting styles, which may be controlling and marked by rigidity, may have the effect of fostering negative self-perceptions and a low sense of self-worth in children. When children feel rejected by their parents, are not treated with warmth and compassion, or are frequently criticized, they may be more likely to grow up overly critical of both themselves and others.

The Effects of Self-Criticism on Mental Health

Occasional self-doubt is generally considered to be a normal part of life, but chronic or excessive self-criticism may contribute to mental health concerns, such as depression, social anxiety, body image issues, or feelings of worthlessness. A tendency to blame oneself when things go wrong may lead to feelings of failure, lowness, or a depressed mood. Individuals who are highly self-critical may also feel guilty or ashamed when something goes wrong, believing the fault lies with them. Self-critical tendencies can also be linked with perfectionism, self-harm, and eating and food issues.

In some cases, a tendency toward self-criticism may lead one to project negative beliefs onto other people, which may then lead to the expectation of outside criticism or negative feedback. When negativity and censure is expected, interpersonal relationships may be impacted. Thus, internal and external criticism might both lead to the development of feelings of loneliness and isolation and contribute to a person's withdrawal from others. An individual who is self-critical may also find it difficult to assert personal needs and desires and may be more likely to exhibit submissiveness in relationships with others, out of a fear that voicing an opinion will lead to criticism.

Therapy can often be helpful for people who are self-critical to an extent that their daily function or quality of life is impacted. Although there is no one specific type of therapy that is used to address harmful self-criticism, a variety of therapeutic techniques may be beneficial. One effective intervention for self-criticism is self-compassion, or practicing kindness and understanding toward one's self. A therapist can teach ways to practice compassion and can help a person seeking treatment explore any potential barriers to self-compassion.

Mindfulness interventions also serve as another effective method of combating self-criticism. Mindfulness, which refers to a non-judgmental awareness of one’s thoughts and feelings, has been linked to enhanced self-esteem. Therapy can improve insight into thoughts and feelings, and those with greater mindfulness skills may be better able to verbally describe internal experiences, consider thoughts and emotions without judgment, focus on present events, and avoid lingering on or reacting to every negative thought. Mindfulness is believed to be likely to further one's ability to self-validate and challenge negative thoughts.

In therapy, different types of self-criticism can also be explored, and a therapist may be able to help those in therapy focus on constructive and useful self-critique. Self-criticism that focuses on a particular behavior that can be improved on is more likely to lead to helpful solutions than self-critical thoughts that may be chronic and defeatist and thus, difficult to resolve.