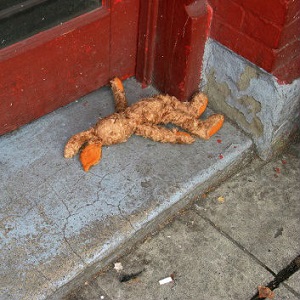 The final alcoholic family role I’d like to discuss in the context of recovery is the lost child. This is the child who stays under the radar, invisible, quietly decamping to his/her room, disappearing behind a stack of empty booze bottles or cloud of marijuana smoke. To paraphrase D.W. Winnicott, for a child it is normal to hide, but a tragedy not to be found.

What happens when a lost child gets clean and sober? To understand this, we have to look at what happened to make this child “lost” to begin with. This child, in a way, becomes, almost literally, a skeleton in the family’s closet. The child’s disappearance serves the dysfunction of the family in that this child will never divulge the family’s skeletons. There are many “elephants in the room” in such families; sometimes untreated addiction, other times abuse or neglect. The family’s collective shame must be hidden; the lost child serves as a kind of metaphor for what is repressed. When a child like this stays lost, he learns that his needs don’t matter, and so the adaptive hiding strategy becomes a way of life, later to be soothed and narcotized by the powder, needle, or bottle (as well as a series of codependent relationships).

The ambivalence this child struggles with in new-found sobriety arises from the advantages and disadvantages of the lost role. On the one hand, this person has protected his/herself from the vortex or volatility of the chaotic family dynamic. He/She has not had to enter into the fray and risk attack, injury, or humiliation. Invisibility becomes the best form of defense.

On the other hand, he/she lives with a kind of emotional anorexia and is a prime target for a host of destructive behaviors: self-harm (cutting, burning), eating disorders, sexual compulsivity, codependence, addiction, and so forth. This child wants to be heard, needs to be heard—but is terrified of being heard. Being heard means facing the feelings beneath the cloak of invisibility, and risking the judgment and/or abandonment of the family members who rely on him/her to stay quiet. Such a person carries heavy feelings of shame, guilt, rage, isolation, and a longing for (and terror of) human connection.

The question of whether the family can be helpful or destructive, as the child gets sober, hinges, not so much on the degree of the family’s past dysfunction, but on their current willingness to get honest and authentic. This family support, of course, is preferable to the lost child, more so than accusations of the child being bad by forcing them to look at long-hidden family secrets.

The family may consciously yearn for his/her sobriety while unconsciously defending against their own shame and guilt. I once knew the father of a l0st daughter, newly sober (my client); he was often enraged at her for a variety of puzzling reasons, until I discovered that he himself was an alcoholic who was terrified of having to face his own problems. His words said “get healthy” but his behavior said “let’s keep things as they were.”

It only takes one relatively balanced member of the immediate family who is willing to align with this newly sober lost person, and live in honesty rather than deceit, to bolster the addict’s support system. Having just one family member on board who loves and accepts the addict, who is not overly threatened by his/her recovery, can bolster a sense of hope. This actual relationship can shed light on the addict’s (usually futile) attempts—prior to sobriety—to find surrogates for lost family members.

Of course, the addict’s partner or family members often cannot or will not accept their loved one’s condition and desire to change, and are threatened by the prospect of recovery. They may defend this terror by insisting on seeing addiction as a moral failing or weakness. Still, the addict has a chance of success, as always, though the recovery work proves more formidable: this is a case that requires immediate support-building, as the lost person begins speaking the truth and breaking the bonds of repression. Like all addicts, he/she will require the support of a sober community, therapy, and intensive recovery work. Being rewarded with love, acceptance and higher self-esteem is often strong inspiration.

It is still amazing to me how threatened alcoholic family members become as their loved one becomes healthier; as order is threatening to chaos, health is threatening to the ideology of sickness, which casts a black pall over everything and fosters a sense of futility. Thankfully, recovery can lift the black veil of these (mis)perceptions, when the addict is truly ready to surrender and begin the slow, sometimes grueling, but always worthy, path towards wellness. This can happen without the aid and support of loved ones, but recovery comes easier when family, too, is willing to change.