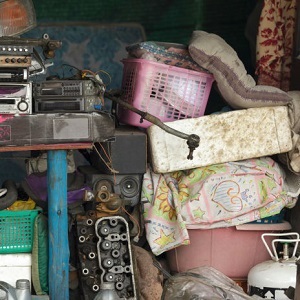 If you’ve done any channel surfing at all in the last year or so, you might have come across a couple of documentary shows (Hoarders on A&E; Hoarding, Buried Alive on TLC) featuring people who are living with massive amounts of clutter and/or trash in their homes. The piles of “stuff” often reach to the ceilings, and there is barely space to stand, much less walk across a room. The programs show professional organizers and psychotherapists working with people to clean out their homes. If you’ve seen either of these shows, then you know what I mean when I say it’s something you don’t forget easily. Although the people being featured on the shows are treated with respect and compassion, the images are shocking and disturbing. How does this happen? Why do people do this? Can they be helped?

People who compulsively hoard do experience excessive extreme anxiety, doubting, checking, and reassurance seeking before discarding items, which does suggest a close relationship to OCD. However, recent research suggests that compulsive hoarding may also be associated with a range of other psychiatric conditions, in addition to OCD. Compulsive hoarding behavior has been reported in disorders including schizophrenia, social phobia, eating disorders, depression, and dementia. In studies of the brain, researchers compared neurochemical activity and patterns of blood flow in the brain of people who compulsively hoard and people who experience OCD who did not hoard. They found that the neurochemical activity and blood flow patterns in people who hoard were different than those in people with OCD, suggesting that compulsive hoarding is a separate symptom/condition from OCD.

Many, if not most, people have a certain amount of clutter in at least one part of their homes. Where is the line between average messiness and compulsive hoarding? Hoarding behavior includes:

Why/how does a person cross the line from messiness to hoarding? There are several proposed explanations for the causes of hoarding behavior. Investigators have suggested that errant cognitive processing leads to hoarding. These include information processing deficits, meaning that people who hoard have substantial problems focusing and sustaining attention, difficulty categorizing and prioritizing their possessions, and difficulty in making decisions about their possessions.

Maladaptive beliefs about, and extreme emotional attachment to, possessions may also contribute to a person’s hoarding behavior. People who hoard have an exaggerated sense of responsibility for their possessions, and desire complete control over them. They experience intense emotional distress (anxiety, grief, or guilt) about the ideas of discarding or losing an object, leading to avoidance, and escape in the form of saving and acquiring.

There are also studies showing that difference in brain activity and /or brain injury can lead to hoarding behavior. Scientists have identified the areas of the brain involved in hoarding. One study showed reduced glucose metabolism in certain areas of the brains of compulsive hoarders. Some people with traumatic brain injury, stroke, and neurodegenerative diseases have also developed hoarding behavior.

In the past, clinicians have used the same treatment methods for compulsive hoarding that they used for OCD, with poor results. While medication, cognitive behavioral therapy for OCD, exposure and response prevention therapy have all been effective treatments for OCD, they have been shown to be of little benefit for compulsive hoarding. People with hoarding behavior have high instances of poor insight, refusal of treatment, lack of cooperation, and inability to recognize hoarding as a problem, all contributing to difficulty in effective treatment.

There is hope for people who hoard, though. In a recent study, researchers designed a new cognitive-behavioral treatment especially for treating compulsive hoarding. In this treatment, motivational interviewing (getting people excited about the seriousness of the hazards of hoarding and the benefits of clearing out their homes), skills training for organizing and problem solving, and modification of beliefs about possessions are emphasized. Also, treatment includes frequent off-site sessions in which therapists helped people to sort, discard, and learn to resist acquiring more items. People typically respond more positively when the therapists are at the home with them, assisting them with sorting and discarding.

The sight of such intense messiness and disarray is certainly disturbing to see, but knowing that hoarding is a symptom of a person who is possibly experiencing severe emotional distress, hopefully, helps to engender compassion and patience in friends and family members. Information about help for hoarding can be found online at www.ocfoundation.org/hoarding/.