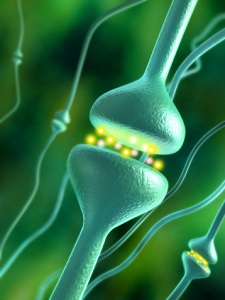 A neurotransmitter is a chemical released by a neuron that either amplifies or inhibits the transmission of signals between neurons.

Neurons send signals to other neurons across tiny gaps called synapses. When a nerve impulse triggers a signal, the neuron’s axon releases the neurotransmitter. The neurotransmitter binds to receptors within the postsynaptic membrane and affects the signal sent across the synapse.

The neurotransmitter dopamine is important for understanding addiction. Drugs such as cocaine and heroin increase dopamine levels and inhibit nerve signals that can lead to negative feelings. The increased dopamine increases the addict’s desire to use the drug. Schizophrenia may result from excessively high levels of dopamine.

Psychiatrists commonly prescribe selective serotonin reuptake inhibitors to clients with depression and anxiety. These medications can help regulate serotonin and improve mood.  However, not all mood disorders are caused by serotonin issues, so these medications do not work for everyone. Further, clinicians typically diagnose based on symptoms, so there is no way to know how many patients suffer from depression due to neurotransmitter issues rather than due to other problems.