Escape from the Fog: How Therapy Changed My Life 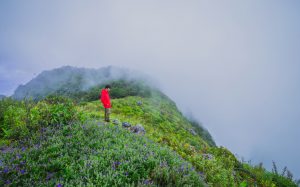 It took a long time before I finally decided to see a psychotherapist—and for reasons that are probably very common:

It took a long time before I was able to acknowledge that my childhood had an effect upon my adult life. Again, with nothing to measure against, how was I to know? I took for granted that my self-doubt, low self-esteem, anxiety, irritability, and desire to be on my own were simply who I was. I didn’t even realize I kept people at a distance and shared nothing of myself because I had been that way all my life. It was simply my personality. I was an introvert. So what?

But thankfully, I began to piece together that negative patterns in my life were emerging and repeating. I recognized the depression I felt had begun in high school, continued and got stronger in college, and then became a recurrent theme in adulthood. After several failed relationships, the depression continued and grew intolerable. I had no idea my own self-imposed barriers against people were actually making things worse.

At 34, I knew something was wrong because I was drinking more, not less. I could see I had always pursued relationships that were destined to fail from the outset, and if they weren’t, I would sabotage them so they did. Through either cheating or losing interest in sex, we would simply drift apart and become friends. For me, the concept of intimacy was repellent.

I give myself credit for recognizing I was stuck, unhappy, and highly unlikely to improve on my own. I was concerned about costs, so I searched and managed to find a therapy organization with a sliding scale fee. I forced myself to the initial consultation meeting, and was caught off-guard when the therapist fairly quickly asked me about my childhood. What would that have to do with anything? I managed to tell her it wasn’t happy. I had snippets of foggy, bad memories.

Over the next two months, I dared to open up to her. I told her about my mother, who had beaten me over the course of six years. It wasn’t my mother’s fault, I explained, because she’d experienced much worse: her father had committed suicide. After a particularly difficult session, I broke down for the first time. I told the therapist about a horrible beating and the announcement from my mother that she hated me.

But I was very fearful, and that would be my last session. I returned the next week and told the therapist I couldn’t afford to come anymore. My finances were too tight. She said I was always welcome to come back, and she was proud of the progress I had made.

While my first attempt at therapy ended prematurely because I was still unable to face painful, buried memories, it proved to me that something mattered about my childhood. I’d hidden it away for a reason. There was something inside me, because I’d never cried like that before.

It took about another 10 years before I dared to try therapy again. By then I’d become a poster child for dysfunction: anonymous hook-ups, juggling sex with multiple partners, heavy binge drinking on weekends, and depression. Thankfully—again—I recognized my patterns were not going to stop without outside help. I had proven myself powerless to make changes on my own.

Searching the internet, I found GoodTherapy.org. I liked I could explore psychological topics, and could find a large, supportive community.

Searching the internet, I found GoodTherapy.org. I liked I could explore psychological topics, and could find a large, supportive community. I located a doctor near my home with a specialty in childhood trauma. Though I had no idea what trauma meant, I thought back to my first experimentation with therapy, and surmised a childhood focus would probably be what I needed.

I was very nervous on the first meeting, but the therapist put me at ease. I felt an immediate rapport with him. When prompted, I told him about the “childhood” part. I showed him a scar just below my right eyebrow. My mother had thrown me and I’d caught my face on the corner of a wooden bookshelf. I wanted to be worthy of his time and was afraid he might find my case frivolous and refuse to see me. At the end of the session, I asked him if he thought we would be a good fit, and he said, “Very much so.”

About two years later I began a book, Grandson of a Ghost, as a therapeutic exercise. I still had difficulty comprehending that my childhood impacted my life, and the book helped me see—literally, in black and white—the ramifications. Here is an excerpt, taken from the moment when I was able to articulate how the abuse poisoned my sense of self:

For Scott, it was now clear that with no one to talk to, and with no frame of reference—in isolation—he grew up fearful of people and had a low self-image. The low self-esteem as a child made the world a scary place. It was terrifying before and after a beating. He was helpless and lacked any shred of control. Everything was potentially dangerous and threatening, laced with a fear of getting in trouble. Fear of making a mistake. Fear of others discovering he was actually something awful. The secret had to be hidden so that no one would find out. It would interfere with learning, because of the amount of mental energy required to keep the secret. He daydreamed constantly, lost in a fog. It made sense. He was ashamed, because he misbehaved and always made his mother cry. He didn’t deserve love, because he was the horrible dark seed somehow planted within the family and disrupting it.

Generational abuse—abuse passed down from parents to children—is a widespread problem, and it impacted my family after the suicide of my grandfather. It’s a difficult topic, and I hope my book can help people.

Three and a half years later, I am still with my therapist. My life has been transformed. The fog has lifted. I’ve learned not to overreact to threats, both real and imagined. I’ve learned to question and quickly parse an alarm. I’ve learned my abuse did have lasting repercussions. I’ve also learned that love means something. It matters. And before working with my therapist, I was closed to it. Now I see connection to others as the key that sets me free.

Scott Depalma is the author of the forthcoming book, Grandson of a Ghost. He grew up in Vermont and fled to New York City when he turned 21, unsure of anything except the need to run and disappear. Scott hopes his story helps others recognize that abuse has a lasting impact, but also that a new perspective (a rebirth) filled with joy and connection is possible at any age.