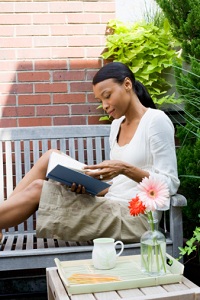 Introversion is a personality trait that is characterized by a tendency to be inwardly oriented and to gather strength or energy from being alone rather than from the company of others.

Introversion, like many personality traits, exists on a continuum: Introversion can be extreme, moderate, or somewhere in between. People who are extremely introverted do not typically reach out to others and may appear distant and aloof. With an introverted personality, energy is typically drawn from the self, in contrast to an extroverted personality, where energy is often drawn from interactions with and the proximity of others. Introverted people may often become drained by the presence of others, finding social interactions or large groups to be exhausting.

Introversion indicates an introspective focus, or a tendency to place more consideration and interest on ideas and concepts rather than on social activities or other people. Introversion can also be seen in work and activities. An introverted personality typically dictates a preference for independent work, a careful and thoughtful choice of activities, extensive exploration of a few fields of interest, and often, more time spent reflecting on an idea before acting on it.

The introverted personality is frequently associated with strong communication skills, good listening skills, and a tendency to take extra care to process and produce messages. Recently, the unique strengths of introverted people have been highlighted in popular culture, such as in Susan Cain’s best-selling book Quiet: The Power of Introverts in a World That Can’t Stop Talking.

While an introverted person does not typically relish interacting in large groups and may prefer to spend more time alone or in the company of a small number, introversion is not a negative trait and does not indicate antisocial behavior. It is simply a personality trait characterized by introspection. Introversion is also often thought to be synonymous with shyness, but the two are not necessarily linked. A shy person may be extroverted or introverted.

Research shows that individuals with extroverted personalities may have a difficult time understanding those with introverted personalities. As a result, a person with an introverted personality might experience difficulty at school or in the workplace, as they may often be urged to be more open and talkative and to interact more often, which can be stressful to individuals who do not feel comfortable as part of a large group. This pressure often results from a misunderstanding of introversion. Schools and offices that are tailored to more effectively meet the needs of both introverts and extroverts—by allowing individual work or project development, for example, as an alternative or in addition to group work on school projects or workplace tasks—may be beneficial in helping those with either personality type to flourish.

Extremely introverted people are often less likely to seek out novel experiences and tend to have restricted outward emotional expression; but this does not mean they are depressed or unhappy. Depression is sometimes associated with feelings of isolation, and so people who spend a lot of time alone may frequently be regarded as depressed in an extroverted world, but solitude is not a sign of depression. In fact, an introverted person may experience feelings of lowness, stress, or anxiety when he or she is pressured or required to interact with others or when it is difficult or impossible to find time alone.

How Is Introversion Measured?

Introversion is traditionally considered a lasting hallmark of personality that influences daily interactions and decisions. However, introverts may become extroverts during their lifetime, and vice versa. Several personality tests measure traits commonly associated with introversion, including:

However, psychologists frequently rely on self-reporting of introverted behavior. While introversion appears to be a relatively stable trait, it is also context-dependent, and some experts have criticized personality tests for failing to take into account the fact that environment, stress level, and numerous other factors can affect the expression of introversion as well as other personality traits. 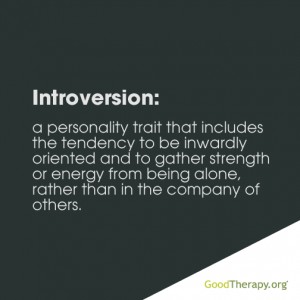