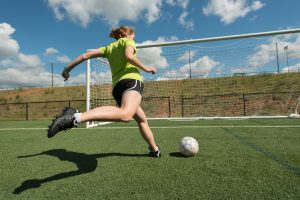 Female soccer players exposed to stereotypes about their playing ability experienced significant reductions in their dribbling speed, according to a study published in the journal Psychology of Sport and Exercise.

The study is just one amid an increasingly large volume of studies on stereotype threat. Stereotype threat is the tendency of marginalized groups, such as women and people of color, to underperform when they are made consciously aware of stereotypes about their group. For example, a persistent stereotype suggests women are innately less adept at math than men. According to several studies, when women are told scientific research shows gender differences between men and women in math, they often perform worse on math tests.

Although women’s sports continue to increase in popularity, stereotypes suggest women are inferior athletes. To test how this affects female performance, scientists from Germany recruited 36 competitive female soccer players from three different Frankfurt soccer clubs. Each participant was timed in a dribbling exercise at the beginning of the experiment.

Each participant read a fake article about soccer. One article discussed the increasing worldwide popularity of soccer, while the other argued that women are inferior soccer players. Next, researchers asked them to indicate, using a 7-point scale, how strongly they believed the statement “I think boys and girls play soccer equally well.”

Researchers again timed players’ dribbling speed to assess the effects of the stereotype exposure. Women who had read the negative article about women’s athletic ability dribbled more slowly than they did before reading the article.

Female athletes are often exposed to stereotypes and discrimination, even within their own athletic leagues. Earlier this year, five members of the United States women’s soccer team filed a lawsuit alleging gender-based wage discrimination. The suit alleges that, although the team brought in $20 million more in revenue in 2015 than the men’s team, female players are paid about 25% of what male players earn.