Mindfulness: Untying Knots in the Body, Mind, and Heart 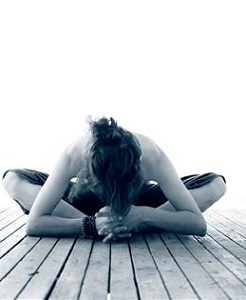 “It feels heavy right here,” Rebecca* said, crying and touching her chest, “like a huge rock is sitting on me. It’s like that old cartoon, where a boulder would fall off a cliff and pin the roadrunner to the ground—it feels like I can’t move.”  Rebecca, a 32 year-old successful marketing professional whose older sister had recently been diagnosed with a psychotic condition, had come to see me last year. She seemed lost in grief. Fluctuating bewilderment, sadness, fear, anger, tenderness, and love were tying knots in every part of her.

I thought that untying some of the knots in her body, with the help of mindfulness practices, might help her begin to lift the boulder.

Growing up, Rebecca’s sister had provided unconditional loving support which protected Rebecca from demanding, neglectful, and painfully critical parents. She had always relied on her sister to guide and comfort her; they had always been best friends. She said that now it felt like she was standing at the edge of the ocean, watching her sister sit on a raft drifting out to sea. She had been crying uncontrollably off and on for days. What made things even harder was that her sister sometimes acted like her old self, then became delusional again. Rebecca’s emotions were rising and crashing along with her sister’s state of mind.

Mindfulness of the Body: Body Scanning and Stretching

The first foundation of mindfulness is mindfulness of the body. It is cultivated with body scanning and movement practices, like yoga and walking meditation, anchored in feeling the sensations of breathing. A body scan involves directing one’s attention to different areas, one at a time, and focusing on the sensations in each place. A scan can begin with feeling the moisture on one’s skin, sensations of warmth or coolness, pressure or tingling. Then we scan the interior of the body, noting muscle tightness or ease near the surface and going deeper, where emotions express themselves as inner physical sensations.

Building brief body scans into a sustained stretch can begin to soften tight muscles—created from strong emotions—and release the mind from thinking for a while.

Prior to entering therapy, Rebecca had taken an 8-week course in Mindfulness-Based Stress Reduction (MBSR) from me. MBSR is based on the work of Jon Kabat-Zinn at the University of Massachusetts, and is taught in hundreds of hospitals, corporations, and schools in the US and around the world. Rebecca had done many body scans as part of the course. She knew how to locate and identify the physical sensations accompanying her emotional states. The following intervention was natural to offer, and easy to do with her.

Untying Knots in the Body

As Rebecca continued to cry, we talked about the benefits of recognizing and allowing her grief. But after 20 minutes of repeated bouts of intense sobbing, she asked me to help her stop. I asked if she would like me to guide her through some breathing and mindful stretching; she immediately said yes. We did a four- or five-minute sequence of stretches, while she remained seated on the couch. I guided her to stretch gently, to her limit, with each pose, holding it for 20+ seconds, and remembering to breathe. While holding each stretch, she scanned, place by place throughout her entire body, for unnecessary tension—inviting it to soften (without insisting) wherever she found it.

“Psychotherapeutic approaches that utilize mindfulness offer well-developed non-verbal exercises that enable the individual to dip into direct sensation beneath the veil of words that may often conceal the mind’s pain. This sensory immersion enables the individual to disengage from those bottom-up enslavements at the root of suffering….” (Siegel, 2007)

“Our poses can strongly influence our emotional states. For instance, because of the expansive inhalation and opening of the chest, backbending, traditionally a stimulating practice, can elevate a low mood. Exhale-intensive poses such as forward bends tend to calm an agitated mind. In any balance practice, both inhale-oriented and exhale-oriented postures are executed in order to create equilibrium in the body and breath and to gain emotional
harmony.” (Gerstein)

Untying Knots in the Mind and Heart

This practice creates a state of non-thinking in the midst of strong feelings. Non-thinking helps release habitual, reactive thought patterns as attention is redirected to the body—what is called the neutral ground of attention. If, in the heat of raw emotion, we give free rein to thinking or emotions, our familiar and deeply grooved cascades of mental and emotional activity take their usual course, often intensifying the emotions, or cordoning them off from awareness. Instead, if we direct ourselves to notice “what am I feeling in my big toe right now?” the cascade slows, or even stops, for a while. Awareness remains intact, and new, more balanced, and less distorted thoughts have a chance to arise.

When she sat up again after her last slow, deep forward bend, Rebecca’s face had softened, her breathing was quiet, and she said “it’s gone, the heaviness is gone.” She said she felt sad, but less afraid and overwhelmed. She began to speak with compassion for herself and her sister, while remaining more relaxed for the duration of the session.

Before ending, we rehearsed the practice again: she brought the feelings back into her awareness on purpose, then, increasingly independently, guided herself through stopping, breathing consciously, body scanning, and stretching/releasing tension.

Rehearsal increased the chances that she would remember to use breathing and stretching in the days ahead. Later, she reported with some relief that she had remembered and been able to stop and practice, and that it had helped sometimes. Directing focus away from thinking, and into the body, gave her a sense of independence in calming herself, and also helped her to use her considerable intelligence to understand her sister’s situation, and to face the frightening challenge of becoming independent of her sister for the first time in her life.

Practices like these are not intended to offer an easy fix for difficult emotions or life experiences. Mindfulness, at its core, involves observing things as they are and not fighting them. One formula used is Pain x Resistance = Suffering (PxR=S). Paradoxically, allowing ourselves to be with our pain, sadness, fear, or anger, frees us to go beyond them for a while. And, according to Daniel Siegel, when practiced enough, “… an intentionally and repeatedly created state can become an effortless trait of our being.”

Is prior training required for this intervention to be effective?

A person must be open to locating and feeling different body sensations. Not having this training is a limiting factor. In my experience, however, the breathing, stretching and scanning practice can lead to a similar shift in people who are receptive, regardless of having prior training in mindfulness.

*Names and identifying information have been changed for privacy