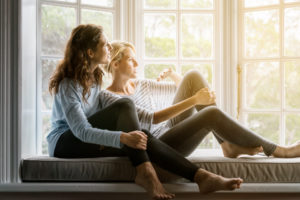 Editor’s note: This article is the second in a two-part series. See Avoidant Attachment, Part 1: The Dependence Dilemma.

When we live in a continual state of freeze, we aren’t only hiding, we are living alone (even when we’re in a relationship). Focused on the preservation of Self and resources, driven by self-sufficiency and independence, we come to believe that outside support is not an option. From the outside, it may seem as if we are hoarding food, money, time, words, emotions, and so on. It can also be framed as a conservation of resources in a closed (isolated) system that does not expect any exchange of resources between systems.

With limited resources, efficiency becomes paramount. Many people on the avoidant end of the attachment spectrum may come to depend on the creation and maintenance of a predictable and efficient routine that does not require energy expenditure on avoidable and unresolvable situations like interpersonal conflict.

The Myth of Functional Dissociation

The freeze state, which prepares us to hold and preserve until safety or support arrives, is a very efficient survival response. As such, it brings with it the valuable tool of self-regulation by dissociation. If something feels uncomfortable, we just turn it off. Compartmentalize. Stuff it away. By breaking life into fragments, we can remain present with the portions that are tolerable.

While in many cases this happens automatically, we may also feel as if we’ve mastered dissociation. Though this can happen at both ends of the attachment spectrum, on the avoidant side it can feel functional and intentional. We then might ask our anxious partners (often with disdain versus curiosity, because resentment does tend to build in avoidant attachment), “Why can’t you just turn off your emotion? Why does it have to get so big?”

Dissociation does bring with it some challenges. Memories, emotions, and bodily sensations may become inaccessible. Sometimes the remaining present feels unbearable, so we disappear. If we feel unsafe and dissociative while in a particular moment of life, sometimes we appreciate that moment (or entire relationship) only in retrospect.

Dissociation can also be activated by conflict. The more the other person amplifies, the smaller and more still we might become. Some even dissociate to a point where they become mute (or even fall asleep) during an argument.

If we feel unsafe and dissociative while in a particular moment of life, sometimes we appreciate that moment (or entire relationship) only in retrospect.

So we continue to live in an isolated bubble, preserved and protected, our resources limited because exchange feels unsafe and we believe “Nobody really loves anybody.”

The spotlight is our nemesis, and words take effort because they elicit our own physical emotional expression, which those around us may judge and reject. The words we put out into the world can be used as weapons against us: they not only reduce the deniability factor when the spotlight comes back around to us, but when others don’t like our words, we may face conflict.

We often resent those closest to us for their perceived judgment and rejection, for crossing boundaries we never articulated, or for not knowing how to draw us out from our silence (that to us is speaking volumes). From our perspective, we’ve been sending out very clear signals that nobody is picking up.

There is a fatalism inherent in the freeze state.

Showing a person on the avoidant end of the attachment spectrum that it’s okay to need people can be a hard sell. So, let’s take a look at the evidence. The following traits are often indicators of an unacknowledged need for people:

Many of us learn early in life to separate from uncomfortable sensations and emotions by dissociating and compartmentalizing. We may become so good at it that we don’t recognize when it’s happening. This is how we handle things like separation. We don’t realize we miss anyone because we dissociate from loneliness. And when they return from that trip to the store, we can fall right back into our story that says we need nobody, that nobody should need anyone.

If the dilemma lies in our dissociation from discomfort and our own internal denial of social needs, then healing comes in recognition and gradual exposure to discomfort in feeling and expressing those needs. This healing might include leaning vulnerably on others and feeling met at our own level. A sense of agency in meeting our own social needs can feel liberating, and as our bodies learn to relax, over time we may find it even easier to meet those needs. We experience others as more safe and open as we ourselves open up to their presence and accept ourselves the way we wish to be accepted by others.

These tips can help further healing: