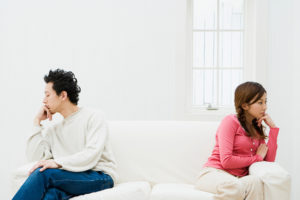 Editor’s note: This article is the first in a two-part series. See Avoidant Attachment, Part 2: The Downside of Preservation.

We’re in a relationship, and we feel nothing. Or we gather an ever-growing stockpile of resentment, invoking various strategies to escape intimacy without actually rejecting our partner or escalating into conflict. Does this sound familiar?

While romantic relationships may start off with blissful ease, the dependence of connection can eventually feel threatening. We might feel as if their needs are overtaking ours. We may have less time to relax or get things done in the presence of others. We have to hold our guard against judgment or rejection, and we may come to yearn for bodily regulation, free from social threat, in the safety of alone time.

We can’t assert ourselves, because we worry our needs trigger those around us, increasing and amplifying their needs. The most direct path toward self-regulation requires disengagement from others. So as their needs amplify, we withdraw, maybe even shut down, knowing engagement only increases threat of conflict.

Authentic connection may feel unsafe in this conditioned reality of social threat. It isn’t possible for us to lean on an Other, and intimacy is not allowed. Dependence has come to equal imprisonment, and conflict means the demise of self-agency, which to some, may feel like the death of Self. While saying, “Don’t see me,” we resent those who do not see us.

In our more resourced moments—maybe during time alone, when our bodies are calm—we may desire connection, recognize patterns of limited relationships, admit to loneliness, or even regret about the ways we’ve pushed others away. We may be curious how we can become more emotionally available to those we love. It may be the case that we only feel softness and desire for connection in retrospect, when our bodies feel calm and regulated, when resources feel replenished. We feel love only in its absence.

If neglect leads to obliviousness and oppression fosters freeze/dissociation, then we are left with two options. Either we do not know our emotions exist or we actively separate from the discomfort of them, walling them off so they do not exist in our perceived reality.

If reflection teaches us about ourselves, neglect presents a null mirror, leaving us less aware and without language for internal experience. Oppression often removes any permission to speak or assert ourselves. We might feel more comfortable in our minds when we are solving problems and finding value and purpose in that. We may even seek out problems that need solutions, chaos that seeks refinement, or relationships that confirm our belief we cannot depend on anyone because their needs are too great.

When we experience consistent disconnection (oppression or neglect) in childhood, we often feel easily engulfed by the emotional needs of others. We may desire space and freedom to meet our own needs without having to track or navigate theirs. We have learned through childhood experience that our presence—our emotions, our needs, our mere existence—is a burden. So we contain these things. We internalize and enforce counter-dependent rules in ourselves and in others.

We are drawn toward the illusion of connection, often describing our ideal partner as one that “gets” us in such a way that we need not put any effort into explaining, that we need not become vulnerable. This level of attunement is both the missing experience of empathy we lacked in childhood and the mirage of our attachment journey.

When feeling helpless to meet the needs of others, we often use strategies to disengage the attachment systems of those around us, perceiving their escalating emotions as a growing threat (especially when accompanied by facial or other physical expressions of anger that remind us of early life oppression). But this might look like withdrawal and can feel like abandonment to the people we love, who may find themselves walking on eggshells to avoid exposing us to emotions that trigger our feelings of oppression or helplessness (in much the same way that we attempt to avoid triggering their attachment reactions).

Stan Tatkin, author of Wired for Love, suggests that we on the avoidant side tend to conceptualize the world in terms of individual systems rather than social/interactive systems. (“I take care of me. You take care of you.”) While we may occasionally function well in pairs or groups, the transition into those settings can feel threatening, and our resistance may present an ongoing challenge in relationship. We live lives more solitary, even in a romantic partnership.

We are drawn toward the illusion of connection, often describing our ideal partner as one that “gets” us in such a way that we need not put any effort into explaining, that we need not become vulnerable. This level of attunement is both the missing experience of empathy we lacked in childhood and the mirage of our attachment journey.

As a defense, we often remain intent on naming the absence of empathy, even seeking confirmation that our partners are not providing such a basic human need. We might say, “This doesn’t feel like love.” Or, “I want to be loved, not needed.” More likely, we’ll say nothing. We’ll simply resent this relationship in which we feel unseen and unknown, resent partners for not picking up on our signals, for not providing the empathy and acceptance for which we yearn, the positive reflections we never received.

While any extreme attachment posture creates challenges when navigating romantic relationships, those on the avoidant end of the spectrum often feel helplessness in response to external emotion (“You’re supposed to contain your emotion. If you can’t contain your own, I can’t contain it for you.”), reacting instinctively in ways that inhibit intimacy. Eventually patterns of broken relationships and unmet needs may be recognized, and the belief that love is not actually possible may be the result.

The Freeze State: Hiding and Hoarding

When fight and flight are not viable options, we move into freeze. We avoid detection and conserve resources.

That urge to disappear, to become small and quiet—that’s freeze. In decreasing presentation of Self, we decrease risk of being seen. We preserve our chances of survival. For those on the avoidant side, being seen may feel unsafe. But this creates internal conflict.

We may have been born with an innate drive to connect and lean on others, but survival has overridden attachment, though the drive for attachment remains active. The yearning to be seen and loved is countered by the drive to become small and invisible to threats. When safety is the underlying goal, hiding becomes nuanced, entangled in everyday behaviors that others may not even recognize.

Many of us practice any number of these avoidant strategies, but this doesn’t mean we are limited to them. We also carry anxious and secure strategies, right along with the avoidant ones. The challenge lies in recognizing the strategies we default to and working to develop our tool belt of alternatives.

Scarcity is a common perspective between anxious and avoidant attachment styles. The anxious side views interpersonal connection in terms of scarcity. (“I can never get enough. It’s always disappearing.”) The avoidant end tends to view time, space, and other resources in terms of scarcity. And when resources are viewed as individual possessions rather than shared, conservation often dictates competition and resentment. (“My time is not our time. We can’t both get needs met at the same time. When I’m with you, my needs will not be met.”)

While those on the anxious end of attachment often use strategies to amplify and draw attention, we on the avoidant end lean toward the opposite. We actively diminish and contain our reactions in order to avoid detection and negative attention. For those organized around the expectation of continued oppression, negative focus can feel unbearable and unresolvable.

We tend to do whatever is necessary to avoid judgment and rejection, which means a low tolerance for blame or responsibility (and decreased likelihood of apologizing or acknowledging our own faults). While partners may perceive them as premeditated, these survival behaviors are often subconscious and automatic.

Beyond more obvious avoidant strategies like not speaking, physically isolating, chasing alone time and saying “No” by default in order to maintain space and physical regulation, we may utilize a wide range of more subtle strategies to conceal our needs and perceived inadequacies and ensure we avoid attack/judgment/rejection:

Within this process lies invalidation of Self and Other. Over time, the shaming inherent in these strategies can change those around us. As they lose their light, they may initiate less, which may make them feel safer (less confrontational) to us. But what this also means is that they may be growing closer to the point of rejection that we expected all along. In this way, by rejecting their bids for intimacy, we create what we fear and expect: rejection by those closest to us.

Many of us practice any number of these avoidant strategies, but this doesn’t mean we are limited to them. We also carry anxious and secure strategies, right along with the avoidant ones. The challenge lies in recognizing the strategies we default to and working to develop our tool belt of alternatives. If you aren’t sure of how to begin, a qualified and compassionate counselor can help.