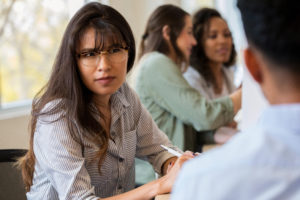 Resentment is often defined as anger and indignation experienced as a result of unfair treatment, and it’s a relatively common emotion.

Those who experience resentment may have feelings of annoyance and shame—they might also harbor a desire for revenge. A person may become resentful as a result of a slight injustice or a grave one, perhaps harboring the same bitterness and anger over a small matter as they would over a more serious issue.

Feelings of resentment are not linked to any particular mental condition but may instead result from the inadequate expression of emotions after a painful experience. They may come from a true, imagined, or misunderstood injustice. A careless comment made by a friend could facilitate indignation and grudging feelings, as could criticism from a boss. Resentment can also be broad and applied to large groups of people, often with drastic consequences; for example, racism and religious persecution often develop from deep-seated resentment.

A person experiencing resentment may feel personally victimized but may be too angry or ashamed to discuss the resulting emotions, instead allowing the grudge to fester and be expressed in the form of anger.

Resentment can appear in many different forms. Some signs you may be harboring resentment include:

Though resentment can be fleeting, dissipating when someone realizes an event was misinterpreted or receives an apology from the person who committed the offense, it can also be a persistent emotion. An individual may hold on to negative feelings, revisiting the distressing event again and again and becoming unable to let go of anger or a desire for revenge. In this instance, resentment may come to affect an individual’s mental health.

Because resentment is a common emotion, most people will experience a general feeling of anger or annoyance over unfair treatment at some point in life. But problems can arise when a person is unable to forgive—persistent resentment might stem from a serious matter. For example, a person might, understandably, resent a parent after years of abuse and become unable to look past any injustice. However, when a person begins to feel like the victim in every negative situation, they may develop an altered perception of reality and find it difficult to see any positive outcomes.

Developing an ability to move on or forgive is considered an important aspect in overcoming resentment, as is acknowledging the feelings underneath the resentment and facing them one at a time. Resentment can intoxicate a person, as feelings of anger and rage lend a false sense of power and do not always encourage a healthy form of expression. But this intoxication can become dangerous, as any intoxication can, when feelings of resentment grow unchecked and turn into hatred.

If left to bubble under the surface, resentment can end relationships. Those who feel resentful towards their partner may find that talking about what’s bothering them, no matter how minor or petty the issue may seem, can reduce the resentment they feel and even deepen their connection.

Couples who find themselves unable to let go of resentment may learn how to communicate about their feelings in couples counseling.

How to Let Go of Resentment

In many cases, letting go of resentment means forgiving. Some individuals find that making peace with something that happened and moving on works better for them. Regardless of how someone chooses to get rid of resentment, it most likely means adjusting one’s frame of mind or emotional responses.

To let go of resentment, it may help to:

If neglected, resentment may become overpowering and even toxic to the person who harbors it. In these cases, talking to a therapist can help individuals explore the issue that caused the resentment, what is making it difficult to let go of, and coping strategies that help people reduce their resentment.

Those who find it difficult to forgive others for any wrong, no matter how slight, may find some benefit in therapy. Those who wish to understand the reasons for their resentment of a particular individual or situation might wish to revisit the event, alone or with the help of a therapist. Because the source of a person’s resentment can differ, there is no one type of therapy used to treat these feelings.

Methods of personal actualization have been shown to be effective therapeutic techniques for treating resentment. Individuals who have self-actualized tend to accurately perceive reality, experience empathy and compassion for others, and are typically able to accept the self and others easily. Therefore, these individuals may be less likely to blame others for wrongs or hold on to resentful feelings.