What It Feels Like to Be Stalked (Let Alone Three Times) 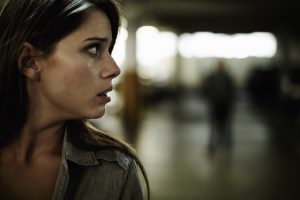 Stalking. The word alone inspires fear and anxiety in many people. For those of us who have experienced it, it may conjure painful images we never stop seeing, no matter how hard we try.

Although the term is used far too casually in some parts of our society, stalking, as defined, is serious stuff. A crime in many jurisdictions, it generally involves unwanted or obsessive attention, following, harassing, or monitoring behavior that might cause a reasonable person to experience fear.

One out of every six women is stalked in her lifetime, according to data compiled by the Centers for Disease Control and Prevention. Men are stalked too, of course, but much less frequently (one in 19).

The first time it happened, I was around 21 years old. It was 11 at night, I was walking home from a friend’s house, and I noticed someone was following me in a car. This was in the suburbs, and there was no one else out on the street. At first I thought maybe it was my imagination, so I turned up a one-way street going the wrong direction for the driver, expecting him to continue on his way and not follow me. He followed me anyway, and that’s when I knew I was in trouble. Then he got out of his car and exposed himself.

I ran to the nearest house with lights on and began ringing the doorbell and knocking. The man drove away. Then I realized no one was home in the house I had chosen as my refuge—or maybe they just didn’t want to answer. I hid, cowering on the stoop, and looked around carefully. Finally, when I thought it was safe, I fled.

When I was in my early 30s I was stalked again. Although I wasn’t threatened physically, I was tormented for several months and was left terrified for a long time.

I lived in an apartment house. My apartment was opposite the service stairs, and sometimes I thought I saw someone hiding in the stairwell near the door to my apartment, watching. This happened repeatedly, but I never actually saw anyone’s face—just a disappearing shadow. I almost didn’t believe there was anyone there; the first time, I wondered if it was my imagination. I told my husband, but he never saw anybody and thought it was nothing to worry about.

Then a man got hold of my phone number somehow and called me repeatedly for months. This was the same guy who hung out in the stairwell, I figured. For me, this was confirmation he was real; this was not my imagination. I almost wasn’t sure if that made things better or worse. The only thing I was sure about was I was petrified.

I was often home alone with my new baby at that time. The man phoned repeatedly and seemed to know my every move. I was afraid to leave the house and afraid to stay home, too. I was scared to answer the phone. I told my husband again, but nothing ever happened when he was home. I felt like he didn’t take my fears seriously, and I was so scared. He suggested maybe it was just a lot of wrong numbers. Was I exaggerating?

I wasn’t sleeping much because I had a new baby, and on top of that, now I was too scared to sleep. Every time I sat down to relax, the phone rang, and there was nothing I could do but endure—I could never let my guard down. I started having nightmares.

Sometimes a man with a disguised voice phoned to say nasty things. Other times, I just heard someone breathing. It went on and on, and finally my husband started to worry, too. Once, he intercepted one of the nasty calls and told the guy off, but the calls went on anyway. This was in the time before phone numbers came up when you were called, before you could block specific numbers. I was being tortured, and it felt like it would last forever with no way out. I began feeling helpless and weak. I got very depressed. How could I protect my baby if I couldn’t defend myself?

I contacted the police. The phone company put a tap on my phone, but the person never stayed on long enough to make an ID. A police officer advised me to buy a whistle, and when the person phoned the officer told me to answer the call with a piercing blast of the whistle. That was okay with me. I wanted to blow this guy’s eardrums out! I wanted to cause him as much pain as he was causing me. I wanted revenge. But most of all, I just wanted him to leave me and my baby alone.

Even if you’ve never been physically hurt, the emotional disturbance of knowing someone is out there watching, listening to, or otherwise intending to scare or intimidate you is dreadful, especially if you think you’re trapped and can’t do anything.

The whistle worked. He stopped calling. I wondered who he was, of course, and eventually I found out the person stalking me was my neighbor, somebody I used to smile at and say, “Have a nice day!” to when we bumped into each other in the elevator. He lived two doors away from me.

That all ended a long time ago, but I still always check to make sure that the door to the service stairwell in front of my apartment is securely closed.

Just recently, someone stalked me on the message app on my phone. I’ve blocked that person—one benefit of technology, though there are downsides, too, that allow for cyberstalking.

Some of the people I see in therapy have also been stalked and badly frightened, like I was. One young woman got extra locks put on her door after she broke up with her boyfriend. He called her repeatedly, as often as 20 times a day, and lurked on the street near where she lived. She gave his contact information to her sister and to a friend and instructed them to go to the police if something happened to her—and made sure her ex knew it.

Even if you’ve never been physically hurt, the emotional disturbance of knowing someone is out there watching, listening to, or otherwise intending to scare or intimidate you is dreadful, especially if you think you’re trapped and can’t do anything. Except for a situation like the first one, where I believed I was in immediate physical danger, authorities advise people not to try stopping stalking behavior by themselves, as that could provoke the person to get more aggressive and violent.

They have a point. I’m scared just thinking about the idea. But while I hope this article doesn’t provoke anybody, I won’t be scared into silence. People who stalk tend to try to bully their targets into silence so they can continue their harmful and potentially criminal actions.

What to Do If You Are Stalked

If you believe you are being stalked, the U.S. Department of Justice advises you to trust your instincts and take the behavior seriously.