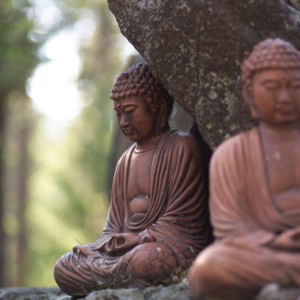 In the 21st century, as mindfulness-based practices become more mainstream, our society and psychotherapeutic community may be more willing to accept that Buddhism could be a valid psychological approach to reducing human suffering. —Danielle A. Einstein (2007)

In some ways, mindfulness is to Buddhism as worshiping is to religion. Mindfulness is a mental practice that is one core feature within a scaffolding of knowledge, tradition, and awakening. Now removed from its casing, mindfulness practices such as meditation are rigorously operationalized for psychotherapeutic purposes, including research designs. This detached arm of Buddhism has come alive in the West to gain size and strength despite the secular environment. Imagine if the “auditing” process in Scientology was an evidenced-based practice for relieving psychological distress. It is hard to imagine detaching such a practice from its larger cultural understanding and history.

There is an interesting emergence of Buddhist practices in psychotherapy as well as subtle distinction between religion and therapeutic models. The concept of religion relates to a social group’s preferred lifestyle, set of values, and interests, as well as committed practices, principles, and experiences (Mohr, 2011). To act “religiously” is to consciously and methodically conduct oneself in an activity, behavior, or ideology. A modern, magnified version of spirituality now includes positive psychology, whereby one searches for meaning, connection, and other secular hopes of universal inclusion (2011).

“Mindfulness” has become a stand-alone contemporary practice for focus, affect regulation, and stress management. Mindfulness techniques have been incorporated into psychotherapy practices that, as a result, have taken on religious forms. The fat of the pre-modern (500 B.C.) tradition of Buddhism has been trimmed, and the leaner version (i.e., mindfulness) has migrated from desolate monasteries into empirical research and pop-psychology vernacular. Questions arise: Are the new-age psychotherapy practices religious? When teaching and conducting mindfulness-based practices, is it possible to parcel out the roots, allegiance, and ideology of its origin?

Mindfulness and other contemplative practices extracted from Buddhism are implanted in several evidence-based, cognitive behavioral practices. Mainstream cognitive behavioral-based therapies have evolved (called the “third wave”) to include mindfulness components. Despite secular efforts aimed to separate mindfulness from Buddhism, when examined closely, religious components are implicit to mindfulness-based stress reduction (MBSR), mindfulness-based cognitive therapy (MCBT), acceptance and commitment therapy (ACT), and dialectical behavior therapy (DBT) (Andersson & Asmundson, 2006). Much like a car’s side mirror, these are closer to religious belief systems and religious practices than they may appear.

The conceptual scaffolding of Kabat-Zinn’s MBSR stems from Theravada Buddhism (Einstein, 2007). The fundamental attitudes are acclimated practices of Buddhist awakening systems and reference the Four Noble Truths. For psychotherapy purposes, MBCT adds the empirical practices of cognitive behavioral therapy (often in group formats) to the MBSR program. Buddhism and MBCT join at the concept of “meta-cognitive insight.” Instead of viewing thoughts as an experiential reality, meta-cognitive insight notices thoughts just as thoughts, with a focus on the individual’s relationship with the thoughts (i.e., not the content).

The structural basis of ACT is relational frame theory (RFT), which is a behavioral explanation of human language and cognition. RFT is applied broadly, so it can be used to understand social processes including religion and spirituality (Andersson & Asmundson, 2006). Interventions derived from RFT and used in ACT approach religious values and practices. In the ACT model, one aim is for the client’s willingness “to clarify life values; and to behave in accord with chosen values through behavioral commitment strategies” (Hayes, 2002).

A significant commonality between ACT and other spiritual traditions (e.g., Buddhism) is the rationale that all humans experience inescapable suffering and the specific role of attachment, mindfulness, valued actions, and issues surrounding self (Andersson & Asmundson, 2006, and Hayes, 2002). Both ACT and Buddhism note the inherent problem of viewing and attaching to this unwavering “self” as something that can be managed with mindfulness practices (2002). For example, a belief that “I am depressed” or “I am a bad person” is a belief one attaches to, which perpetuates further anxiety or suffering. Mindfulness can elicit awareness and acceptance of this process of identification by allowing the person to step back from the internal experience (Sparks, 2015).

Much of psychotherapy is a movement out of a negative state and into a desired, often positive direction. In ACT, the goal is to feel emotions in the context of living a valuable life, while resisting avoidance tactics (Hayes, 2002). There is only a subtle behavioral difference between Buddhist mindfulness practices and ACT, in that the former accepts or actively sits with the thoughts, while the latter focuses on changing the thoughts that get in the way of progress (2002).

Zen Buddhism inspired aspects of DBT, along with behavioral science and dialectical philosophy. The concepts of being whole, interconnected, and amenable to change are central to the dialectical view of the world (Neacsiu & Linehan, 2014). Buddhist dialect uses matching concepts: embodiment, interdependence, or co-arising and impermanence (Einstein, 2007). Zen Buddhism and DBT both focus on the here and now with radical acceptance and letting go of ego. People who use DBT are committed to developing a stable lifestyle (e.g., not engaging in self-harm or suicide) with nonjudgmental awareness and acceptance to reality (Neacsiu & Linehan, 2014).

The fat of the pre-modern (500 B.C.) tradition of Buddhism has been trimmed, and the leaner version (i.e., mindfulness) has migrated from desolate monasteries into empirical research and pop-psychology vernacular. Questions arise: Are the new-age psychotherapy practices religious? When teaching and conducting mindfulness-based practices, is it possible to parcel out the roots, allegiance, and ideology of its origin?

The structure of the DBT model from the perspective of clinicians mirrors the subtle paternalism occupied within DBT practice. Therapists are required to be part of a consultation team and/or a group with an almost dogmatic commitment to a list of rules (Neacsiu & Linehan, 2014). They must use compassion, properly assess problems before giving feedback, exercise assertiveness, emotionally repair with the team, as well as make agreements (e.g., no absolute truth, accept change as natural, empathic interpretations, fallibility). The guidelines are very reasonable and necessary for therapeutic alliance, but the process has an ideological structure one also finds within religious institutions.

In terms of beliefs, a DBT therapist must have a “willingness to believe in the client’s ability to change” (Neacsiu & Linehan, 2014, p. 429) and to use “irreverent communication,” offer “cheerleading,” as well as prescribe “punishments,” such as “vacations from therapy” (p. 437). Is this a conducted activity, behavior, and/or ideology that is conscious and methodic?

Hayes (2002) described Buddhism as the inclusion of “traditions of faith, ritual, practice, and community that are designed to support mindfulness and wholesome actions, and short of becoming a religion, no system of psychotherapy will include all of these elements” (p.65). Perhaps DBT merely falls short in the category of faith.

DBT therapists also use traditional metaphors, parable, and myth with people. They will at times “play devil’s advocate” in a practice called “extending” (Neacsiu & Linehan, 2014). In Zen Buddhism, to reduce dominate meaning of events, “koans” or stories are often “presented as verbal puzzles” as a provocation for questioning principles of reality through meditation (Hayes, 2002, and Fischer, 2013). The dialectic approach activates “What is being left out here?” while Zen koans, similarly, unearth “what is there when the puzzle is no more” (2002, p. 64). Both DBT and Buddhism aim for the individual to let go of their patterns of reactivity to relieve suffering (or in Buddhism, “dukkha”) (Einstein, 2007).

When applied to psychotherapy techniques, the separation of mindfulness practices from the origin—Buddhism—initially resulted in a secularization (2007). The cultural taboo of speaking about religion need not apply to “mindfulness” if it is a culturally accepted, therapeutic tool. Neuroscientist and mindfulness proponent Richard Davidson dedicated a chapter in his book, The Emotional Life of the Brain, to this process. He writes about keeping his meditation practice a secret based on perceived stigma or misunderstanding by colleagues. He speaks topically to the idea of spirituality and Buddhism, but there is no explicit mention of an affiliation with Buddhism.

The increasing segregation or nonconformity of “mindfulness” from Buddhism has actually created an independent spiritual practice (i.e., within modernity) that is being measured scientifically. This is akin to the obstinate historical nature of atheism against—largely—monotheistic religions. Although seemingly isolating, the active disbelief in God created a scientific movement (e.g., led by Richard Dawkins, Sam Harris, Daniel Dennett). The degree of this conscious extension of nonconformity essentially created a religion according to this article’s conceptualization (i.e., methodic and behavioral group ideology).

Buddhism is actually counter to our modern, Western culture. “Mindfulness” is a lighter version with more individualistic aspects (e.g., self-improvement, stress reduction). Buddhism is a radical, pre-modern tradition born within a society that emphasizes the collective “we” versus “I”. For individuals to learn mindfulness apart from Buddhist tradition and precepts is as arbitrary as the isolation of genuflecting prayer (e.g., Christianity) or “auditing” (i.e., Scientology) to use as singular tools for eradicating suffering. The dialectical question for contemporary mindfulness practice becomes: what are we leaving out?