When You Come to Therapy with ‘Nothing to Talk About’ 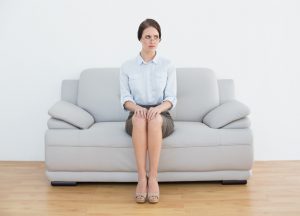 “I have nothing to talk about.”

Maybe two or three months after beginning therapy—maybe later, sometimes sooner—a person might say this to me and perhaps look a little surprised or confused.

“There’s nothing coming up for me.”

Often the person is weirded out. Concerned, even. The person will tell me how they usually have one, two, seven, eight things they really want to talk about and just don’t know what to make of not having something ready to go.

Coming to Therapy After a ‘Good Week’

Sometimes a person may need some prompting, but often within the first couple of weeks of therapy, with gentle encouragement, people tell what they think is their story. They talk about whatever has been causing them distress: communication problems, feelings of isolation, anger-control issues, deep sadness, etc.

Therapists are trained to help people talk about and process these things. And often, once people start, they keep right on going! We all hold a lot of stuff in, and sometimes we don’t even realize what’s in that backlog until we finally open up.

So the door opens, the person speaks and … here’s something interesting: things may seem a little worse at first. When you’ve been very intentionally not looking at distressing stuff for a long time, it’s bound to bring up some difficult feelings once you start exploring.

But eventually, with some work, compassion, and patience, there’s generally some relief.

And after a while, the person isn’t itching to get to their therapy session so they can unpack, say, that incident at work or the uncomfortable time with the in-laws.

They had an okay week. Maybe even a good one. Maybe not great, but … they have “nothing to talk about.”

Peeling Back the Layers of Therapy

It used to be that therapy was viewed as an archaeological dig into the psyche and the therapist held the shovel. The therapist’s job was to dig until they uncovered what was buried underneath. But rarely is it so simple, and rarely does healing come from insight alone. Often we can discover a possible explanation to an issue, but that doesn’t mean the issue is resolved.

Therapy is done in layers, but unlike an onion, we don’t simply peel off and discard layers once we look at them.

Therapy is done in layers, but unlike an onion, we don’t simply peel off and discard layers once we look at them. We take a layer, examine it, put it back, take another layer, leave it for later, skip a layer to see something else, then go back to the second layer and reexamine it with what we know now. Maybe along the way you fall back into an old habit (remember, the layers don’t disappear) and we spend some time just holding all the layers without processing or questioning them.

Entering therapy with much to talk about—that’s the top layer, or maybe even the second or third. Sometimes that top layer—what we sometimes refer to in therapy circles as the “presenting problem”—has been getting all the attention for so long because it’s the loudest or most painful. When that’s peeled back for a moment, when it has received some attention, we need to take some time to see what else may be exposed. These may be quieter parts of you but are no less important or meaningful.

Letting the Little Thoughts Be Heard

Have you ever met a couple where one partner is a chatterbox and the other seems mute? Until, that is, you get some time alone with the quiet one who, it turns out, actually has some stuff to say, but it gets overshadowed by their partner.

We all have stuff like this inside us. If the “fires” we seek therapy for are turned down a bit, even if just for the moment, then what seems insubstantial can be given more attention. It might not be so insubstantial after all. We just need to allow for the space, maybe even the silence, to give it permission to be heard.

Once you get over your surprise at not having anything “pressing” to say in therapy, don’t be afraid to say whatever you’re thinking or feeling, no matter how inconsequential it may seem. What might seem like little thoughts or feelings can lead to big breakthroughs, too.