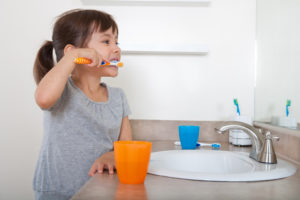 A habit is a learned behavior that becomes reflexive over time. The behavior is often triggered by a certain context. For example, you may automatically go brush your teeth after finishing breakfast as part of your morning routine.

A habit can be healthy, unhealthy, or neutral. A healthy habit might be stretching for ten minutes a day or meditating when you feel stressed. An unhealthy habit could be biting your nails or texting while driving. Examples of neutral habits include eating the same brand of cereal each morning or taking the same route to work.

Unconscious behaviors such as breathing or blinking do not count as habits because they are instinctive rather than learned.

How are habits formed?

Most habits begin as intentional, goal-directed behavior. For instance, a young child may be instructed by their parent to wash their hands before dinner. At first, the child may only wash their hands to get praise from a parent. They may need reminders to do the task before each meal.

Research suggests habits take an average of 66 days to form. But as the washing behavior is repeated, the child will get used to the routine and stop needing reminders. They will wash their hands before meals regardless of whether the parent rewards the behavior or not. At this point, the behavior can be called a habit because it is driven more by context than a concrete reward.

Habit formation can be thought of as making a mental shortcut. At the beginning of the process, the act of washing one’s hands before dinner takes a lot of steps. The child needs to move to the sink, turn on the water, lather on the soap, and then dry their hands off. But as the habit forms, the brain begins to group these steps as one collective “chunk.” In other words, it starts to interpret a four-step process as one simple behavior called hand-washing.

On one hand, habits can save you mental energy. Making decisions takes effort, so if you do certain behaviors automatically, it can save you energy to focus on harder choices. However, reflexive behaviors can be harder to notice and stop. Because the brain codes habits as one action, behaviors such as nail-biting can be difficult to interrupt in the moment.

Research suggests habits take an average of 66 days to form. Yet this process can take place in as little as 18 days or as long as 254 days. The time it takes to form a habit depends on many factors, such as the behavior’s complexity, individual temperament, and so on.

Is It a Habit or Addiction?

A habit is not necessarily an addiction, though the two are strongly linked. A habit is any conscious behavior you do on a routine basis. Addiction, meanwhile, means you do the behavior to an excessive degree and feel unable to stop or control it.

For example, someone with an exercise habit may work out three times a week. If they fall ill or have an emergency pop up, they may skip a day at the gym without much consequence. Someone with an exercise addiction, on the other hand, may exercise for hours each day without proper rest. The person may feel compelled to work out because otherwise they feel guilty, antsy, or irritable.

If you are addicted to something, chances are that you have many habits revolving around said addiction. You may turn on the TV before drinking or stand in a particular corner to smoke. If you seek help for addiction, whether through outpatient counseling or a residential treatment center, treatment will likely focus on breaking the habits that contribute to addiction.

How to Break a Habit

Breaking a habit can be difficult, especially when its deeply entrenched. The following factors can determine how easy or hard the habit is to quit:

However, it is possible to quit most behaviors with perseverance and a good strategy. The following tips may help you break a habit:

If you are struggling to quit a bad habit or start a healthier one, you can get help from a counselor.