When the Mask Falls Off: Understanding a Very Human and Very Spiritual Reality 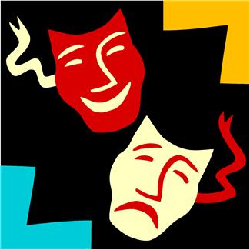 This years 2012 contenders in the GOP election process are presenting themselves as devoutly religious people. But what lies within these candidates beneath their religious presentation? Often in life we don’t get to see what lies beneath a person’s “good self” presentation, also called a mask. We don’t get to find out if that person really is religious, kind, caring, or not. The discrepancy is often hidden.

How does this occur? Children responding to trauma or abuse experience mean-spiritedness and destructiveness. It may even start out as simple anger, but anger that gets buried or distorted and twisted into something destructive. Many of us know not to act it out, for fear that we will be punished, made bad, abandoned. So, instead, we create a mask self to hide our destructive self. And we hold onto our mask for dear life, defending against discovery. In the meantime, our buried mean-spiritedness does have an effect on us and those around us, if only unconsciously.

Lately many masks have been falling off—and the abuses of power and other dangers beneath the masks have been revealed. Numerous government leaders, corporate executives, and others have been exposed or have exposed themselves for their abuses of power: some sexual (Anthony Weiner); some financial (Bernie Madoff); some legal (Idaho Senate Republican Caucus Chairman John McGee, arrested June 2011 for DUI and vehicle theft); some ethical (Michael Jackson’s doctor, Conrad Murray); and some spiritual (among evangelical leaders, Richard Roberts, son of Oral Roberts, arrested January 2012 for DUI; among yogic leaders, Gurudev of Kripalu, who required celibacy of unmarried students while at the same time having sexual relations with some of his students; and among New Age leader, James A. Ray, who misused the Native American sweat lodge, causing several people to die, then fleeing the scene).

But it is a rare thing in a presidential election for candidates to tout their religious connection and the next day, or even the next sentence, to expose their mean-spirited, destructive side.

One candidate presents himself as a religious man, but creates ads that are lies, isn’t concerned about the poor, makes $10,000 bets in the middle of a debate, runs a very ugly, negative campaign in Florida, and repeatedly says he misspoke—things that he actually meant and came through his mask.

Another contender, claiming to be a reformed religious person, forgiven for his sins, revealed how arrogant, grandiose, and dishonest he is, not to mention unfaithful to two wives.

A third candidate, a state governor of, actively used his religious beliefs both as a basis for his policy and in his campaign ads and debates; but in his eyes his religious beliefs provide justification for imposing his will and his religion’s will upon the state and the nation. His state executes more prisoners than any other state in our nation, while he claims to be pro-life; makes it legally mandatory for girls to receive a vaccine even if their parents object; and makes it compulsory for any woman seeking an abortion to be given a vaginal ultrasound—even if it’s against her will and her doctor’s will.

Yet another challenger would like to use whether or not an individual follows “God’s law,” as the candidate defines it, to determine who can claim equality under the law; he doesn’t want to “make black people’s lives better by giving them somebody else’s money”; he claims the right to privacy doesn’t exist in the constitution; and he maintains it’s dangerous to use contraception in this country.

And still another contender quotes the golden rule, but only for foreign policy, not regarding race relations at home, and it turns out he’s revealed himself as racist.

What used to be hidden beneath the mask, especially the mask of “religiousness,” is coming out into awareness in the election process these days. But, most religious and spiritual traditions don’t teach about this truth, at least as far as common knowledge reveals: Identifying with our spiritual self cannot safely occur without also identifying and resolving the destructive aspects of ourselves (even if we don’t act them out). Since this is not taught, most of us don’t know what we’re seeing and experiencing. Most of us don’t realize that we’re witnessing the religious/spiritual mask falling off and the destructive, mean-spirited aspects of people coming out into the open from beneath it.

What lives within us beneath our mask is coming out, allowing us to see it, know it, and utilize what we see to help heal it. First, in our individual candidates and leaders, by our insisting that they do their own work with their destructiveness before they can run for office and lead us. Second, in our society and our world, by seeing it, naming it, talking about it, and not settling for it. And third, but probably the most important,  in ourselves. We need to see beneath our own masks, what is destructive and mean-spirited in ourselves, however hidden it may be. We need to commit to and actively work to heal those parts of ourselves, for the sake of the life within us, for the sake of the life immediately around us, and for the sake of the life all over our world.