We Got It All Wrong about Gay Relationships 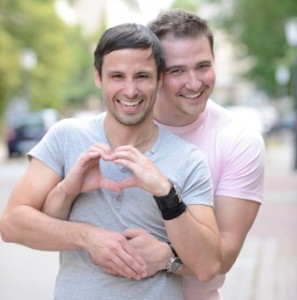 You know the stereotypes—gay men aren’t interested in long-term, committed relationships. Or they can’t sustain them. It’s all about sex, the quickies, the one-night stands. Funny thing, though: ever since same-sex marriage became a civil rights issue, so many gay couples who have been together for decades have come forward. Another stereotype bites the dust! (Or should, anyway.) It seems that we’ve been looking at it the wrong way around.

Stereotypes are used to oppress. They are often a reaction to fear. Even the rare complimentary ones—“Those people are very smart!”—are offensive because, just like the negative ones, they make assumptions about large groups of individuals. Both positive and negative stereotypes create expectations and attitudes that affect people’s behavior toward the group in question. In the case of gay people, stereotypes about their relationships belittle their humanity and their morals (and thereby justify hate and deprivation of their basic rights). But in reality, it may be a “chicken or the egg” situation of sorts. That is, did the relationship styles create the stereotype or did the social condemnation cause the relationship style?

If one is not allowed to engage in gay relationships because of societal and legal prohibitions, what other recourse is there but to keep them hidden? And if they are hidden from public view, how can anyone know they exist? How easy it is then to proclaim that they do not exist! Then there are the great numbers of gay men who had to enter into an “acceptable” relationship—marriage to a woman—in order to maintain the illusion of heterosexuality. Society created a situation where this was barely a choice; anyone believed to be gay would have been subject to loss of employment, banishment from religious institutions, ostracization from family and friends, and violence. Sadly, in many places this is still true. The only chance these people had to express their true sexuality was in brief, clandestine encounters. We must ask: if gay had always been an accepted human variation, would those stereotypes have had the chance to form?

The flip side of this is that when you are gay and grow up hearing lies about your relationships all the time, you may start to buy into them at a subconscious level. It is therefore important for young gay people to really think about whom they are as individuals and what they want for themselves. Because for the first time, there are options. Gay is “out.” Gay people from all walks of life are speaking out about their sexual identity. There are new laws being passed, and acceptance is growing. In fact, for more and more of the public, gay is a nonissue. It is mainstream. But where there are options, one has to think about the choices.

Choice is freedom and that’s a great thing. But with choice comes the need for self-examination and responsibility. You can’t just be along for the ride. YOU are in the driver’s seat now. What do you want for yourself? Do you enjoy the single life? Is marriage what you’ve always dreamed of? Is it something you want, just not right now? How about parenthood? Do you understand that dating is a process of learning about one another? Do you know what you want out of a relationship and how to have a healthy one? These are all things you need to ask yourself, but may not have been able to realistically consider until recently.

In the past, other people labeled the relationships of the gay community based on prejudices and discrimination. The gay rights movement has, and continues to, open up doors so that each individual can decide what is meaningful and chart the course of his or her own life.