November 26, 2013 • By Share Your Story contribution by Bintu Bangura 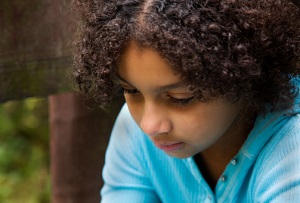 The reason I chose lack of communication as the main catalyst for families falling apart is that I’ve experienced it personally. I was born in the West African country of Sierra Leone. I lived there with my mom and dad until I was about 8 years of age and was brought to America and my mother’s younger sister was given custody of me. She became my mother and I became her child. Things seemed perfect, and to my family back home I was living the best life there is. I was in the land where everyone wanted to be—America.

And everything was great, because it was the two of us together; she loved me like I was her very own child and I loved her, for she was now my mother. It wasn’t until a third person—a man—was added to our family that we were divided. Everything started falling apart because I was left in the dark. Things were never shared between my new mother and me. We still communicated; however, the things that should have been shared and talked about were deemed too taboo to be spoken off. As she decided to be with this man, nothing was discussed with me. Even though I was a child I still believed that if someone else is to be a part of my life, I deserved some input.

When I was in high school, during my 10th grade year, she decided that we were going to move in with the man. Once again, it was as if my opinion did not matter—I was never asked about how I felt about moving in with this man, or whether I even wanted to move in with him. My mother was simply focused on her well-being, which drastically divided us. I figured, if she was not involving me in life’s big decisions then why should I let her know what was going on in my life?

We continued to live together, yet we were so far apart. We never talked about anything pertaining to what issues I was having in school or things that were going on in my life. There were times we would go out to the movies or out shopping like the “normal” mother and daughter, but during those times when we were supposed to have bonding experiences, all we would talk about was the weather. Sometimes we didn’t even say much of anything to each other. We drifted so far apart that now our relationship is nonexistent.

For so long I felt nothing but rage and anger. Questions filled my heart. Why was she with him? With everything in me I hated him because of what he did to me while she wasn’t around—all the rude comments he would make and sexual advances toward me. There was so much hatred in me! It transferred over to her as well; if only she would have asked how I felt about us living with him, maybe I would have shared more with her.

I eventually told her everything that happened in that house while she wasn’t around: his rude comments, as well as his sexual harassment. More secrets came out, and things that for so many years I held inside and had never spoken of to anyone. She asked, “Why now?” She wanted to know why I waited so long to tell her. I said, “I know it’s not the ‘right’ time to tell you because you’ve been in the relationship for so long, but it is never too late for someone to know the truth.”

I did not go to a professional therapist per se. I had therapy from an older friend who had his master’s in psychology. He was the first person I talked to about the problems I was dealing with. He helped me face my issues, rather than ignoring them like I’ve always done. Before, I would avoid issues by not talking about them or by dismissing them. Before opening up to him I always buried the pain, anger, hurt, rage, and fear. But he helped me to take on all these emotions firsthand. So I decided to talk to my mother about everything I went through as a child—how I felt like my feelings did not matter, and how she chose her husband over me, always.

The process helped me, because rather than doing what I always did as a child—that is, either avoiding the situation or completely dismissing—I was able to express everything that for so long I kept bottled up inside of me. I was finally able to TALK about it. After releasing years and years of emotions, I was finally able to let go. My mother finally understood where I was coming from—why for so many years we never really had a relationship, why I was never fond of her husband, and why I disliked him so much.

Today, I am on my own. I have my own apartment, I go to school full time, and I am working to be successful. I have yet to know what my mother did about her relationship with the man. She wanted us to sit and talk as a family about everything that happened in that house, but I said no; I needed time to truly let go of everything. I needed time to find me, I need time to heal—and healing begins by finally talking about it). I don’t know what the future holds for us, but it is my prayer that things get better and that she finally realizes the man she chose is not healthy for her life.

While our communication is minimal, I try to keep a relationship with my mother, mostly because of God. I believe that whatever is tied here on earth has been bound in Heaven. I want to be able to live my life without anger, without rage. I want peace. I want to be forgiven for my mistakes because I was not the perfect child, and I’m still not a perfect person. Most of all I want to be able to forgive, and I don’t want anything to come between me and my blessings from God because of me not communicating to the woman who raised me.

For the rest of my life, I don’t have to be angry any more. I don’t have to feel afraid or hold things in. I can live my life the way I want to, and the way I feel is best for my well-being. And although my relationship with my mother has forever changed, now at least she knows why things are the way they are between us. I have no regrets about anything.