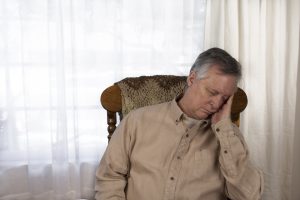 Seniors who experience excessive fatigue during the day may have more brain atrophy than well-rested seniors, according to a study presented at SLEEP 2016, the 30th Anniversary Meeting of the Associated Professional Sleep Societies (APSS). Researchers found atrophy was greatest in regions of the brain vulnerable to Alzheimer’s and age-related decline, suggesting fatigue could be an early sign of brain degeneration.

The Link Between Fatigue and Brain Atrophy

Participants who reported high levels of daytime sleepiness had lower cognitive scores and more medical problems. They were also more likely to report sleep disturbances, pointing to a correlation between disturbed sleep and daytime fatigue.

The study’s authors suggest these results may help doctors identify people at risk for dementia, increasing opportunities for early treatment. Previous research supports this claim. According to the Alzheimer’s Association, changes in sleep habits are common among people with Alzheimer’s. This may be due to the ways Alzheimer’s changes the brain. Some common Alzheimer’s-related sleep changes include:

In the late stages of Alzheimer’s, seniors may spend as much as 40% of their nights awake, as well as a significant portion of the day sleeping.

The National Sleep Foundation says some age-related changes in sleeping are normal. The foundation recommends 7-8 hours of sleep per night for seniors 65 and older, compared to 7-9 hours for adults younger than 65. The American Academy of Pediatrics is also supporting a new revised recommendation from the American Academy of Sleep Medicine for children’s sleep guidelines. Also presented at SLEEP 2016, these recommendations now include as many as 16 hours of sleep for infants, 14 hours for young children, and 12 hours for school-age children.