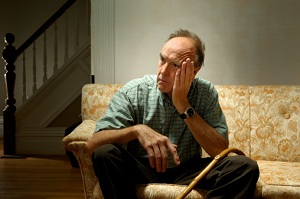 Alzheimer’s disease, the most common form of dementia, causes irreversible changes in the brain. These changes result in deficits in cognition that may include poor memory, behavioral changes, and a diminished ability to care for oneself.

Not all dementia or memory loss is caused by Alzheimer’s, but the condition is responsible for between 60 and 80% of dementia cases. According to the fifth edition of the Diagnostic and Statistical Manual (DSM-5), Alzheimer’s may be diagnosed in a person presenting with a major or mild neurocognitive disorder when family history or genetic testing indicates the presence of the genetic mutation that causes Alzheimer’s, or based on the following criteria:

Decline is often gradual, but the progression of Alzheimer’s is not typically marked by extended plateaus. The changes in the brain are permanent, and Alzheimer’s ultimately leads to death.

This condition is characterized by three general stages.

With mild (early-stage) Alzheimer’s, a person may have what seems to be memory lapses and forget words or the location of objects. It may be difficult to plan or organize, perform tasks at home or work, or remember new names and material. Diagnosis in the early stages of Alzheimer’s can help a person prepare for the future and seek treatment for symptoms.

The moderate stage of Alzheimer’s might last for several years. A person in this middle stage might experience changes to personality and mood, forget personal history or events, mix up words, and find daily tasks difficult. A greater level of care is generally necessary once individuals reach this stage.

Severe (late-stage) Alzheimer’s is marked by the loss of the ability to speak, respond to one’s environment, and control movement and bodily function. Full-time care may be required, and the risk of contracting infectious diseases increases in this stage.

Not all individuals move through the general stages at the same rate, so symptoms will often be experienced differently. The average life expectancy after diagnosis is four to eight years, but depending on a number of variables, some individuals may live up to 20 years after diagnosis.

Alzheimer’s is at least partially the result of genetic factors. Both risk genes (which increase one’s likelihood of developing a disease) and deterministic genes (which directly cause diseases) are linked to the development of Alzheimer’s.

A person who has a relative with Alzheimer’s has a higher risk of developing the condition, and this risk increases if more than one family member was diagnosed with the condition. However, only about 5% of Alzheimer’s cases can be solely attributed to genetics.

Age is the greatest known risk factor for this disease. One’s risk of developing Alzheimer’s increases significantly as one ages. About one in three people over the age of 85 have Alzheimer’s, compared to only one in nine people who are 65 and older. While the disease is most common in people of advanced age, early-onset Alzheimer’s can affect people in their 40s and 50s, and research has suggested that the rare genes that cause Alzheimer’s directly (deterministic genes) may lead to the early development of symptoms.

Lifestyle factors and environmental toxins may also contribute to Alzheimer’s. There is some evidence that keeping the mind active in old age can reduce the risk of developing the illness, though there is no guaranteed method that will prevent it. The consumption of coffee has also been linked to a reduced risk of Alzheimer’s.

Is There Treatment for Alzheimer’s Disease?

There are several medications available for Alzheimer’s that can help slow brain deterioration and may bring about some improvement in behavior. Some medications have been shown to lessen symptoms of memory loss and confusion, and high doses of vitamin E may also have an improvement on cognitive changes. However, results are mixed and the drugs may be more effective in some people with Alzheimer’s than in others.

People in the early stages of the disease are often encouraged to develop coping strategies to deal with memory loss and impairments in brain functioning. Therapy can help a person affected by Alzheimer’s explore various methods of coping when faced with these challenges, and the support of a therapist may also be helpful as a person copes with the behavior and personality challenges—such as irritability, anxiety, and depression—that may develop with Alzheimer’s.

In the later stages of the disease, people may have very little awareness, and mental health practitioners might focus primarily on helping loved ones and caregivers cope. Doctors continue to research the disease with the hope of developing further treatment or a cure. Early intervention may help slow the progression, and future treatment protocols may focus as much on prevention as on treatment.