Why Do We Value Religion More as We Age? 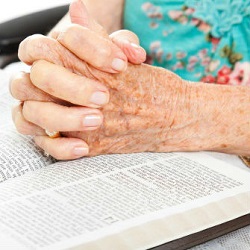 What prompted this article was something I read recently in AARP Magazine. (I guess I’m dating myself with that one!)

“The older you are, the more likely you are to value religion, says a new Pew Research Center survey, ‘Growing Old in America.’ Do religious folks outlive their secular age-mates? Maybe. Earlier research indicates that people who worship regularly follow a healthier lifestyle and share a life-lengthening social network. And for some, faith grows with age: a third of those 65-plus said religion became more important over the course of their lives.” (AARP Magazine, November and December 2009).

What’s interesting to me is, not so much whether or not interest in religion grows with age, but WHY?

I can come up with a few reasons:

1. One obvious reason might be that as people age, they are more aware of their mortality. It takes a certain amount of years and experiences to fully appreciate that they do not live in human form forever. Though it is not true that all young people feel like they will live forever. There are many youthful folks who have been exposed to death at an early age, and, as a result, have become aware of their own mortality. But, for most of us, it is an awareness that increases with age.

2. Another reason might be that, as people age, some become more reflective about their lives. This makes sense because there has been more life on which to reflect. As people get older, they tend to think about what that life has meant, and what they will leave behind. Those thoughts often get people thinking about what does happen when they die. This may be what inspires many people to think about some kind of higher power or divine force who, perhaps, rewards us for a life well-lived (or conversely punishes for a life lived badly), or who might be available to help make the transition.

3. When people think of their mortality, most don’t want to be alone as they make that transition to the other side. That’s when someone might turn to spirituality and/or religion for support. People know instinctively that no human will be with them as they cross over, but perhaps the divine will be there. So, some of this increased importance on religion may be driven by fear.

4. Another possibility is that the focus of older people is different from younger folks. In their twenties and thirties, much of the focus is on establishing themselves professionally and personally. What will they do? How will they support themselves? How will they acquire what they need and want? What about having a family? These questions often preoccupy them for a certain length of time. In their forties and fifties, they often are just living the life they have created. Perhaps in their sixties, many people begin to realize that they want more from life than just the acquisition of material things and status. Perhaps this is a result of gaining a certain amount of experience with the transitory nature of life. This may lead them to turn to religion and spirituality as an opportunity to get some answers about life’s deeper meaning.

5. Lastly, some people, as they get older, finally stop being reactive to the values and choices of their family of origin, and start to think about their own about spirituality and religion. I’ve worked with a number of individuals in my spiritual psychotherapy practice who say that they were so focused on distancing themselves from the religion of their parents, that they did not think about their own choices in this realm. Finally, with more confidence in themselves and true emotional separation from their parents, they were able to think about this for themselves.