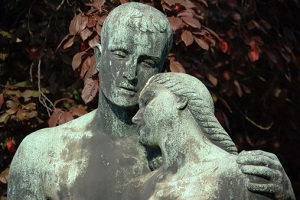 Dramatic activities are powerful tools when used in a family therapy setting. One such tool is called psychodrama. An example of one type of psychodrama is family sculpting. The first step involves determining who has a sense of readiness to do their family sculpting at this time. I generally ask this question to the group and then wait to see who is interested in doing work. If more than one person is interested, I encourage each person to talk about how important it is for them to do work now, versus considering a later date. Whoever has the most pressing need is then afforded the opportunity to do the sculpting.

The individual is then asked to intuitively pick an event or an occasion from their childhood to present to the group. I ask them arbitrarily to pick an event or circumstance from when they were five years old. Later in the sculpting they are asked to pick additional events from age 10 and then eventually age 15. I will say more about this later. The person going through the sculpting is asked to choose a support person to be with them throughout the psychodrama. The person chooses someone he/she feels a connection with and feels safe around. As the individual recalls the setting, and whatever happened, he/she is asked to talk about the other people involved. As the individual introduces the people involved in the original setting, he/she is asked to choose somebody to play the part(s) of those initially involved.

The person then provides information about each individual, so that the people playing the roles will have a sense of what their character might say and how they might act. They can ask questions until they feel a degree of comfort with the role. This is typically a place in the activity where I assure the participants that I have a sense of their role and I will help them if they get stuck. I also make it clear that, if what they are saying does not seem accurate or helpful, I will intervene and provide direction.

While overseeing the group I remain available to be there for emotional support for the person being sculpted. The co-therapist may be asked to play a role. If he/she is not in a role then he/she can help provide information or direction to the participants. This person also plays the important role of tracking the group and must pay close attention to anyone who gets triggered into some of their own trauma as a result of the intensity and/or realness of the psychodrama.

The individual may choose someone to play his/her part in the drama or may play the role him/herself. This is determined through discussion between the individual and the group leaders. The main criteria for the person being involved as him/herself, is generally whether he/she feels prepared to get emotionally connected with the original pain or not. If he or she is not sure of the degree of readiness, it is better to move in the direction of not having a role for him/herself.

Someone experiencing psychodrama for the first time generally does better being less connected emotionally through having someone else play their role. This also allows him/her to see how impacted he/she was by the traumatic event, from the outside. This potentially provides an opportunity to be there for his or her own hurt parts that are revealed through the sculpting process. By getting to see their internalized process be externalized, the person, in some cases, makes their first connection with these hurt part(s), and thus begins to learn to acknowledge and be there emotionally for these parts of him/herself.

© Copyright 2010 by Bill Mason. All Rights Reserved. Permission to publish granted to GoodTherapy.org.