Music to Heal the Mind, Heart, and Body 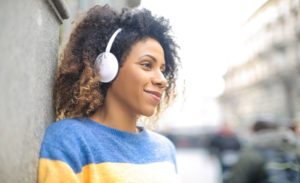 Humans have been making music ever since they realized that tapping two sticks together could create an engaging beat. Music can foster feelings of joy, unleash our creativity, and is often a key feature of our most enjoyable social gatherings. Ever versatile, music can set the tone for romance or relaxation, and can impel us to move our bodies, whether for exercise or self-expression.

In the mid-twentieth century, music therapy emerged as a discipline, and the development of modern technologies has since shed new light on how music can change the structure and function of the brain, improve mood, and help us recover after a stroke.

Music and the Brain

One thing we have learned is that music is processed by a number of different areas of the brain, including ones involved in spoken language. Learning to play music changes the structure of our brains in a way that is somewhat analogous to how physical exercise tones our muscles and makes us stronger and more dexterous. A number of studies with healthy and clinical samples have shown temporary cognitive benefits associated with listening to pleasant music, including improved information processing speed, reasoning, attention and memory, and creativity.

In some studies, verbal material that was presented in a musical context was learned and recalled better than spoken verbal material. Music therapy has also helped people who have had strokes to improve their gait, mood, speech, social interactions, and to reduce visual neglect.

Visual neglect is the inability to recognize objects in part of the visual field due to lesions in the visual cortex. Specifically, a lesion in one hemisphere produces neglect in the opposite visual field (so a stroke in the left visual cortex would result in one being unable recognize objects in the right visual field, and vice versa). In one study of stroke patients experiencing visual neglect, listening to pleasant music resulted in both better mood and a statistically significant improvement in their ability to describe the color and shape of geometric objects presented via computer. No such effects were observed when patients sat in silence or when they were presented with music that they did not like.

The same team conducted another study, this time with 60 patients who had recently suffered a stroke. Participants were randomly assigned to one of three groups: a music group, an audio book group, or a control group receiving neither intervention. All groups otherwise received standard medical treatments. Those in the two audio groups were allowed to select either the music or audio books of their choice and were asked to listen for an hour daily for two months, and then more on their own after the intervention period ended.

Listening to music was associated with greater recovery of verbal memory and focused attention in the music group versus the other two. Furthermore, the music group participants had significantly less depression and confusion than those in the control group. This benefit was seen within the first three months of listening.

The act of listening to music has been associated with a number of benefits, including on mood, cognition, and physical functioning in healthy people and in clinical samples, such as those who have suffered a stroke.

Those in the music group reported that listening helped them relax, increased their motor activity, and improved their moods. In both the music and audio book groups, participants said the experiences provided positive stimulation. Preliminary imaging results suggest that listening to music following a stroke may result in observable changes to the structure and function of the brain that enhance recovery.

The researchers speculate that the short-term cognitive benefits of music therapy post-stroke may be related to effects on the brain’s reward system and effects on the neurotransmitter dopamine, but the long-term effect is more likely due to improvements in mood somehow impacting improvements in verbal memory and attention. Music may also mitigate the negative effects of stress on the brain and body, and impact other neurotransmitters that play a role in recovery.

The act of listening to music has been associated with a number of benefits, including on mood, cognition, and physical functioning in healthy people and in clinical samples, such as those who have suffered a stroke. Although we are still learning about how and why music helps, it is worth making time for music to move your body, engage your mind, and soothe your soul.