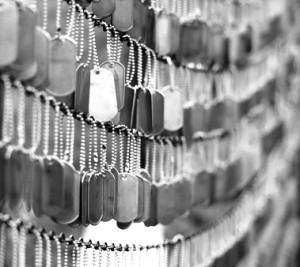 When soldiers are killed in battle, families grieve and nations mourn for some of their bravest citizens. However, wars claim thousands of lives even decades after agreements have been reached and treaties are signed. According to the U.S. Department of Veterans Affairs (VA), approximately 22 military veterans commit suicide each day in the United States. While physical injuries obtained during military service are often immediately addressed, deep psychological wounds may go untreated for years—silently festering into suicidal ideation or other mental health issues.

Mental toughness is a highly valued trait in the military. Fresh military recruits train for months to toughen themselves physically and mentally because combat situations expose soldiers to many traumatic events such as being shot at, seeing a friend get shot, or seeing death up close and personal.

Despite their diligent efforts to prepare, some soldiers are not able to cope with the intense trauma they may encounter in combat. As a result, they can become severely scarred emotionally and psychologically. With mental injuries left unaddressed or simply ignored, many military veterans discover that going home may be even more difficult than going to war.

Veteran suicide statistics obtained from the Department of Veterans Affairs indicate that a veteran commits suicide approximately every 65 minutes. This rate translates to over 8000 suicides per year. And as astounding as these figures are, they are likely underestimated. The data used to determine the high rate of veteran suicide in the U.S. has been challenged numerous times as it was obtained from residents of only 21 of 50 American states. Some of the largest states with high veteran populations, including California and Texas, were not included in the Department of Veterans Affairs’ report on military suicide rates. 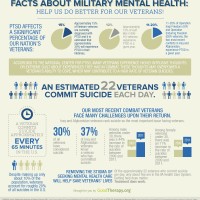 Suicide rates among veterans are much higher than those among American civilians. Approximately 20% of all suicides in the U.S. are committed by current or former military personnel, despite the fact that veterans make up only 10% of the population.

While resources for treating posttraumatic stress (PTSD), depression, and other hallmark psychological injuries are available, only 56% of qualified Operation Enduring Freedom/Operation Iraqi Freedom (OEF/OIF) veterans make use of them (2013). Similarly, of the reported 22 veterans who commit suicide each day, only 5 are in the Veterans Affairs Health Care system.

The good news is that we know when veterans do get help, it makes a difference. In 2007, the Veterans Health Administration launched an intensive suicide prevention effort and has since reported a decrease in:

The Stigma of Mental Health Care in the Military

Mental health issues and the receipt of mental health care treatment can be highly stigmatized within the military. The military promotes ideals such as self-sufficiency, endurance, mental fortitude, and strength, values that also support the notion—however unfair—that those seeking mental health treatment are deficient, dependent, or weak.

Stigmas surrounding mental health treatment, both in the military and outside of it, greatly reduce the number of at-risk veterans that will seek treatment. Lisa Danylchuk, EdM, LMFT, E-RYT, an Oakland, California-based therapist and posttraumatic stress Topic Expert, believes, “Stigmas like these can increase feelings of shame and isolation, which can increase feelings of depression and decrease the likelihood that a depressed or suicidal person will reach out for help.”

In addition to these social pressures, veterans may believe that seeking treatment goes against their core principles and will damage their very identity.

The Department of Veterans Affairs posits that posttraumatic stress, anxiety, depression, bipolar tendencies, and substance abuse are among the most common mental health issues affecting veterans of OEF and OIF.

When members of the armed forces return home, they often experience difficulties with reintegration. The 2014 Iraq and Afghanistan Veterans of America (IAVA) Member Survey states that loss of identity and mental health concerns were two of the top three challenges service members faced when transitioning out of the military. Of the 2,089 Iraq and Afghanistan combat veterans who completed the survey, 53% reported having a mental health injury.

Traumatic brain injury (TBI) is another health concern for veterans that has received much attention from the medical community in recent years, due primarily to the high number of OEF and OIF veterans who have endured blasts and injuries to the head and returned home with symptoms of TBI.

TBI may occur as the result of striking the head with an object, hitting the head during a fall, or, as is usually the case with combat veterans, the head being affected by a nearby blast or explosion. TBI can result in numerous health concerns, including emotional, behavioral, cognitive, and physical deficits. Records indicate that 18% of IAVA Member Survey responders were diagnosed with traumatic brain injury and have reported an increase in anger as well as changes in their personality.

Depression and anxiety are also major concerns for veterans. The Anxiety and Depression Association of America explains that veterans may feel out of sync with family and friends, but they should try to avoid social isolation. When veterans are cut off from social support, depressed thoughts may quickly lead to suicidal ideation. According to the IAVA Member Survey, 31% of Iraq and Afghanistan veterans have contemplated taking their own life since joining the military, compared to only 6% prior to joining.

Though many veterans will experience their greatest mental health struggle after combat, in recent years, a number of mental health services and programs have been established specifically to aid military veterans. Many services within the VA Health Care system are free of charge, and many local mental health professionals and agencies offer their expertise at a reduced cost to veterans. If you are a current or former service member experiencing mental health issues, please reach out to these available resources for assistance:

Family members and friends can also help veterans cope with their psychological wounds. Danylchuk encourages veterans to seek mental and emotional support not only professionally, but also within their social circles. Danylchuk recommends to friends and family members of veterans, “Listen with a non-judgmental ear, but don’t push someone to talk about something they are not ready to share. Encourage mindfulness practices like yoga, meditation, tai chi, and qigong. Remind veterans that they are having a normal reaction to an extreme experience, and that their experiences of anxiety, depression, and/or PTSD do not mean something negative about them; it just means they are still processing parts of their experience.”