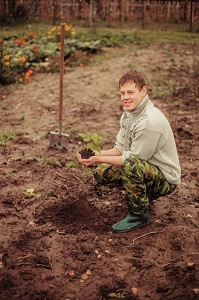 For many military personnel, transitioning from overseas combat to civilian life is a challenge. Veterans mental health issues, including debilitating anxiety, depression, physical pain, stress, and isolation can set in swiftly without solid sources of support and relief in place. A recent report by the American Psychiatric Association states that approximately 300,000 veterans of the Iraq and Afghanistan wars have been diagnosed with posttraumatic stress, which, if left untreated, may lead to severe mental health symptoms, including suicidal thoughts and behavior. With mental health conditions widely stigmatized as a sign of weakness in military circles, reaching out for help is sometimes the most difficult step toward recovery.

The good news: In response to the unique challenges of those who endure combat, therapies that go beyond the tried and true are making their way to the surface. A glimpse into a few of these alternative forms of healing follows.

Plant a Seed, Watch It Grow: ‘Dirt Therapy’ for Veterans

Established in June 2012, Growing Veterans, which operates its community-oriented farm on three acres of land in Lynden, Washington, offers a form of healing they refer to as “dirt therapy”—essentially, planting seeds and growing them in the dirt. According to a recent survey conducted by Growing Veterans, 90% of participants find that helping others through their work on the farm is making them feel better, and 74% are taking better care of themselves with regard to the foods they eat.

The farm’s director, Christopher Brown, is a 27-year-old former U.S. Marine who served in Iraq and Afghanistan. In a recent Grow Northwest article, Brown shares that following an honorable discharge in 2008, he found the shift from combat to civilian life to be a challenge, so a counselor suggested growing plants as a way of coping with his posttraumatic stress. He started small—with a planter box—and then moved to raised beds. Eventually, he accepted a job offer with Growing Washington, a nonprofit farming organization based in Everson, Washington.

Brown now plants, nurtures, grows, and harvests alongside several fellow veterans and community members as part of Growing Veterans, which is sponsored by Growing Washington with the help of Viva Farms in Skagit County and The Mission Continues, a national nonprofit that encourages veterans to actively engage in their communities once they return home. This push toward community involvement is largely inspired by the belief that isolation is one of the biggest challenges many veterans may face, to which the Growing Veterans crew attests.

Chris Rowell, a Bellingham, Washington native who served four years in the Navy and now volunteers regularly with Growing Veterans, says on the site, “The farm is relaxing; you’re surrounded by other people that have been in the same circumstances you’ve been in. It’s kind of like a therapy session, too; you can be who you want to be.”

In addition to the many personal stories of dirt therapy success shared on the Growing Veterans website, Chris Wolf, the farm’s manager, who also has a background in counseling, discusses recent research on the “mood-lifting properties of getting soil on your hands” in a video on the Growing Veterans YouTube channel. “There’s tiny bacteria in the soil that actually secrete a substance that goes through your skin and makes you happier,” she says. “It has the same effect on your brain as an antidepressant.”

The beneficial effects of massage and meditation are becoming increasingly acknowledged in the research community, but not necessarily with regard to posttraumatic stress and other issues faced by veterans. In an effort to show the efficacy of these practices in facilitating the smooth transition of U.S. National Guard veterans and their partners upon returning home from Iraq or Afghanistan, researchers embarked on a project they call “Mission Reconnect: Promoting Resilience and Reintegration of Post-Deployment Veterans and Their Families” (Collinge, Kahn, and Soltysik, 2012).

The researchers were motivated by screenings that reveal that nearly “42% of National Guard veterans and roughly one-third of all returning veterans” experience symptoms concurrent with mental health conditions, but that most do not seek out nor receive treatment. Their belief is that through improvements in interpersonal relations and the implementation of stress-reduction practices such as massage and meditation, veterans will experience much less difficulty in returning to civilian life.

Essentially, the project is a “self-directed program” of evidence-based complementary therapies for the participants to use at home and report on in weekly online surveys. Those who took part in the study met for an orientation in which they received guided meditation, contemplation, and relaxation exercises on CD, as well as a printed manual and DVD that provided them with basic massage therapy instructions. The exercises on CD included audio tracks titled “Centering,” “Connecting,” “Movement into Stillness,” “Therapeutic Yawning,” and “Deep Relaxation.”

The veterans and their partners who followed the meditation exercises and employed basic massage techniques at least three to four times a week over the eight-week period reported experiencing “significant reductions” in a wide range of symptoms, including physical pain and tension, worrying, anxiety, irritability, and—specifically in response to massage—depression.

To further establish the importance of interpersonal relationships in reintegration, the researchers emphasize that the movement away from trauma-induced isolation and toward touch-based connection with another person, in this case an intimate partner, is a significant factor in the positive responses to the techniques used in the study.