Is Your Gifted Child Being Bullied? 5 Ways to Help 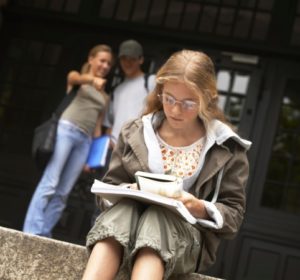 Gifted children may be at a higher risk for being bullied than their more neurotypical peers. The risk factors for bullying victims are similar to many traits prevalent within the intellectually gifted population.

First, let’s look at the risk factors for being bullied. According to StopBullying.gov, a website managed by the U.S. Department of Health and Human Services, children are more likely to be bullied when:

Now, let’s compare the risk factors above to some of the attributes commonly found in gifted children.

Gifted children are usually perceived as different from their peers. They often stand out as “quirky,” “strange,” or “weird,” and they may have unusual interests for their age (such as a 7-year-old who seems obsessed with DNA sequencing). Even gifted children often feel that they’re different and may separate or isolate themselves because of this.

Depression, anxiety, or low self-esteem are also risk factors. Gifted individuals are more often diagnosed with depression and/or anxiety than the general population, elevating their risk of being bullied.

Twice-exceptional children are described as both gifted and coping with special needs. The special need is usually a type of disability, such as a learning disorder (such as dyslexia or dysgraphia) or a mental health condition (such as attention-deficit hyperactivity/ADHD, depression, or anxiety). This population displays traits that have multiple commonalities with the risk factors for bullying, such as feeling anxious, appearing to be weak (and thus not capable of self-defense), or being annoying, different, or simply viewed as “not cool.”

Parents often feel helpless when they realize their children have experienced bullying. However, being empowered to address bullying is not only excellent modeling, it means you can change the situation. Parental involvement is essential when supporting a gifted child to end bullying.

If your instincts are telling you that your child might be bullied, it’s time to ask some questions.

First, you need to recognize when bullying is a problem. If your instincts are telling you your child might be experiencing bullying, it’s time to ask some questions. For parents who need more than a gut feeling, you will have to both pay attention and have frank conversations.

Not all children show obvious signs that they have been bullied, and if a gifted child doesn’t want you to know something, then they may utilize their intellect to creatively hide the impact of bullying or distract you from asking about it.

Bullying is not typically something a child wants to bring up, nor will they necessarily know how to talk about it. This might be especially true for a tween or younger child.

Is Your Child Being Bullied?

Identification is the first step. Signs that bullying might be a problem include:

5 Steps to Mitigate the Impact of Bullying

Follow these steps to help diminish the effects of bullying: