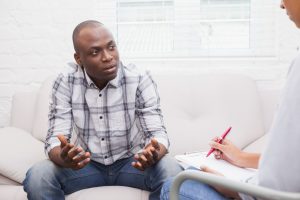 Spoiler alert: The following article contains plot details and other information from the movie Get Out.

Like many Americans, I went to see the movie Get Out when it was released at the end of February. I was—also like many Americans, I imagine—both horrified and impressed by what I took in, and I haven’t been able to stop thinking about the movie’s thematic and practical implications for the therapy field since. The film comes at an important time, serving—as Ashlee Blackwell points out in an article for The Guardian—“a vital reminder that racism remains a more terrifying force than any supernatural boogeyman.”

To my friends who have expressed curiosity but don’t like the horror genre, I’ve caught myself saying the film, which can be summarized as follows, is no more disturbing than our actual racist history: Chris, a black man, accompanies his white girlfriend to her family estate. While her family is friendly, something doesn’t feel right, and he discovers a number of the estate’s black residents have gone missing. When another black man urges Chris to “get out,” he begins to uncover the truth—and learns that “getting out” may not be so simple.

It is my opinion that the film, a critical success, effectively communicates the well-warranted cultural distrust many men of color have toward medicine, toward therapy, and toward white women—all symbols of systems who have manipulated and oppressed people of color over time.

As I reflect on the film, on the tail end of Black History Month, I thought it appropriate to situate the psychotherapy profession in the context of historical racial offenses, as it is only through naming and claiming our unjust history that we can begin to move forward in a more equitable way. I specifically want to draw attention to the ways the movie summons the corrupt racial history of medicine, of psychotherapy, and of white female allegations against black men. While Get Out, marketed as a “horror-comedy,” will likely serve as entertainment as much as it provides political commentary, its box office success suggests a resonance with audiences who are craving affirmation.

On her page about people of color and psychotherapy, Dr. Monnica Williams discusses the distrust with which individuals may view the medical field in general and the belief, held by many, that medical institutions themselves are racist. Historically, it was not uncommon for slaves to be abused and experimented on by white doctors. People of color could not, with their low social status, refuse to participate in experiments, and neither could they withhold consent. Thus, they were frequently victimized and even used as examples when teaching surgical techniques to medical students.

One historical horror cementing this distrust for many people of color was the Tuskegee Syphilis study, a medical experiment observing the trajectory of untreated syphilis in black men in rural Alabama. This study was conducted between 1932 and 1972 under the pretense of offering free health care, but the men were not told of the purpose of the study, the reasons behind it, or even informed they had syphilis. Doctors did not treat their patients for the disease, either: By 1947, penicillin was widely recognized as the primary treatment for syphilis, but doctors still did not prescribe it.

Many medical practices have long perpetuated white supremacy by denying people of color the same agency over their bodies and identities automatically granted to white patients. The case of Relf v. Weinberger in 1973 brought this to light with the issue of forced sterilization for black women of reproductive age, a topic addressed at length by Dorothy Roberts in her book Killing the Black Body. This theme of medical agency appears in the film Get Out wherein black bodies and minds are hunted, bid on, and used for the social, emotional, and physical gain of whites. Rose’s father, a white neurosurgeon, captures Chris for the express purpose of using his body and talents to benefit an older white man.

The ethics of informed consent are so vital to our field, but rarely are these racial dynamics examined in our professional discussions of what informed consent looks like. Even if the above examples are severe, it is important for us to know about these practices so we might approach the informed consent process with the people we work with in a delicate, responsible manner.

What we see depends on what we’re looking for, and our lived experiences will naturally filter the way we perceive the world. As a family therapist and white woman, I was particularly haunted by scenes of hypnosis and cognitive rape perpetuated by the white mother, herself a psychotherapist, who takes advantage of the psychic vulnerabilities of Chris, a young black man with maternal family trauma. In his words, she “gets inside his head” not for benevolent purposes, but to control and abuse.  The therapeutic relationship may be impacted by racial and ethnic stereotypes, though professionals in the field may not wish to admit it. These stereotypes, whether they stem from prejudice or feelings of guilt, are likely to have impact on the care and treatment of the person seeking help.

Williams points out on her webpage that many people of color approach mental health care with caution, further saying they are right to be cautious. The therapeutic relationship may be impacted by racial and ethnic stereotypes, though professionals in the field may not wish to admit it. These stereotypes, whether they stem from prejudice or feelings of guilt, are likely to have impact on the care and treatment of the person seeking help.

It is also well-documented that people of color are disproportionately diagnosed with psychosis, which has implications for over-medication and institutionalization. Another concern lies in the the possibility of people of color who are cautious or defensive in treatment being labeled as “noncompliant” with treatment. Therapy without acknowledgement and thorough analysis of both present-interactional and historical power systems only serves to maintain the status quo.

There are two female psychologists for every male psychologist, and nearly 84% of psychologists active in the workforce are white. Thus, I feel it is important to examine the historical basis for the distrust men of color may have toward white women. In the film Get Out, Rose serves as a sort of gatekeeper of oppression—by bringing boyfriends back home to “meet the family,” she is knowingly putting them at risk. She is consistently dismissive of her boyfriend’s fears and concerns, playing up her niceness and distress when it benefits her.

In 2015, a history of of white allegations against black men resurfaced when Dyllan Roof used the phrase “They’re raping our women” to justify his murder of nine churchgoers in Charleston, South Carolina. Allegations about the “brute passion of the Negro” have been used to justify violence toward black people since the time of slavery, and these were thematically represented in Get Out when Rose gasps out, “Help me!” upon the arrival of a police car toward the film’s end.

Rather than assuming perceived reservation or suspicion to be “noncompliance” or assuming people of color seeking help are themselves “the problem,” as therapists (particularly, as white female therapists) we must turn our assessments inward. What prejudices are we projecting outward in our interactions with the people seeking our help? How do our biases affect the care we provide, and how can we communicate authentically in a way that earns (and deserves) trust?

These are questions without easy answers, but as mental health professionals, we are used to holding complexity. We must approach the difficult topic of race with both realism and accountability if we expect those we treat to be real and accountable with us.