Do Suicide Prevention Signs and Phones on Bridges Help? 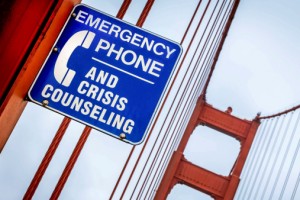 The Golden Gate Bridge, which connects San Francisco and Marin County, is a marvel of architecture and engineering. It’s an internationally recognized symbol of American culture and ingenuity. It’s billed as one of the top tourist destinations in the world.

It’s also, sadly, a well-known suicide hotspot where more than 1,600 people have jumped to their deaths since the span opened in 1937.

Suicides from bridges and other high points have long been a concern for communities. Much has been done in the way of suicide prevention by adding barriers designed to make suicide more difficult, posting signage with helpline information, and installing special phones that connect a person directly to crisis help. Such efforts, though, have generated some debate regarding just how helpful they may be. Some wonder, in fact, if it’s possible they do more harm than good.

Let’s take a look at some of suicide prevention methods in use today on bridges around the world to see whether their intended use and results are as solid as the bridges on which they are installed.

Prevention Signs and Phones: Are They Effective?

On some high bridges, you might see a sign with a message that reads something like, “There is hope. Make the call.” For some people, people at the right place at the right time, this message could be a lifesaver. Some have speculated, though, that suicide prevention signs and phones, while clearly well-intentioned, could inadvertently contribute to the problem by planting the idea of suicide. Could they give someone who otherwise was not considering jumping—from that spot, at least—the idea to do so?

There is no known evidence or research to support this possibility. What little evidence we do have tells an important, more optimistic, story, even if not everyone is buying it. Data collected from several bridges suggests that prevention signs may have an effect on the number of suicides per year—albeit minimal.

Researchers studied data from the Sunshine Skyway Bridge in St. Petersburg, Florida to analyze the period before and after emergency crisis telephones and signage were installed. The results from examining three-year periods before and after signs and phones indicated that the suicide rate dropped from 8.3 per year to 6.3.

In another example, in the mid-2000s, the New York State Bridge Authority (NYSBA) created a comprehensive suicide prevention plan to address this public health issue. Consulting with experts in the field, they concluded that the best possible prevention method was establishing a human connection between someone considering jumping and a mental health professional or law enforcement official. This led to the installation of emergency hotline services on every bridge, an awareness campaign for the public on use of the hotline, and increased emergency training for police dispatchers. The NYSBA declared the program an immediate success, citing that calls from the hotline phones began coming in less than two months after installation. In fact, the first call from a person using the phones resulted in a life saved.

Not everyone is convinced that signs and phones are effective, however. Reacting in 2013 to plans by the city of Pasadena, California to post four signs with a message and hotline number on the Colorado Street Bridge, site of more than 150 suicides over the past century, the then-medical director of the American Foundation for Suicide Prevention expressed doubt that they would have a measurable effect. “It’s a nice first step,” Dr. Paula Clayton told KNX 1070 Newsradio, “but the Golden Gate Bridge does have signs, and yet it hasn’t changed the rate of people dying by jumping from that bridge, so it’s doubtful.”

Dr. Lanny Berman, then-executive director at the American Association of Suicidology, told The Oregonian in 2013 that phones aren’t the answer. “No data shows this method is effective,” Berman told the newspaper. “The only data that exists, both in this country and internationally, regarding prevention of jumping from height, are barriers.”

In the city of Bern, Switzerland, a safety net was installed on the Muenster Terrace, another popular spot for suicides. An analysis of the data conducted in 2005 by researchers Reisch and Michel (2005) found that in the years following the installation, no suicides occurred.

Some have speculated that suicide prevention signs and phones, while clearly well-intentioned, could inadvertently contribute to the problem by planting the idea of suicide. Could they give someone who otherwise was not considering jumping—from that spot, at least—the idea to do so?

Go ahead and read that last sentence again: zero suicides after the installation of the safety net. They also found that the overall rate of suicides by jumping from any place in Bern dropped significantly after the net was put up, suggesting that potential jumpers most likely did not move to another high point.

Researchers Bennewith, Nowers, and Gunnell (2007) examined a barrier on the Clifton suspension bridge in Bristol, England and found that it reduced suicides by 50%. They also believe it may correlate to an overall decrease in suicides in the area.

Physical barriers designed to prevent suicide from bridges come in many forms, ranging from high fences topped by barbed wire to sloped walls to safety nets. Their purpose is to make it impossible (or at least very difficult or inconvenient) for a person to leap to his or her death, and there’s abundant evidence showing they work.

In 2008, the National Suicide Prevention Lifeline (a network of crisis centers in 49 states and the folks handling those hotline calls from bridges) stated matter-of-factly, “The use of bridge barriers is the most effective means of bridge suicide prevention. Subsequently, as bridge/transportation authorities or other stakeholders approach the Lifeline with requests for implementing bridge phones, the Lifeline should emphasize the need for barriers as the most effective solution.”

In reaching its conclusion on bridge suicide prevention methods, the Lifeline detailed three studies (including one of the Golden Gate Bridge and another conducted on the Sunshine Skyway Bridge) where the efficacy of suicide prevention signs and phones as the sole method of prevention is put into question, pointing out that suicides have still occurred from these points after signs were installed. Lifeline believes that signage and phones should be used as supplements to physical barriers.

The strongest piece of evidence for physical barriers as a suicide prevention tool, however, emerged in Auckland, New Zealand, where safety barriers were removed from the Grafton Bridge after having been in place for 60 years. After removal of the barriers due to complaints of unsightliness, suicide researcher Annette Beautrais and her colleagues found that suicides from Grafton Bridge increased from three in the four years preceding the removal to 15 in the four years after removal. This prompted the reinstallation and redesign of the barriers, after which zero suicides occurred from the bridge. This was the only known time and place in the world that physical barriers have been installed, removed for a period of time, and then reinstalled, providing the opportunity to study the effect in a way that would have otherwise been highly unethical.

Lessons Learned: The Future of the Golden Gate Bridge

We end now where we began—at the Golden Gate Bridge, where 38 people died of suicide in 2014 alone and where debate regarding the installation of safety barriers has raged for decades. Progress had been stalled by financial cost and questions of effectiveness, but things are changing. Last year, the Highway and Transportation District, the agency that oversees the Golden Gate Bridge, approved a $76 million project that will install safety nets on the bridge—an action, according to the evidence, that will save lives.

Knowing what you know now, what are your opinions on these types of suicide prevention methods? Have you seen backlash against barriers or signs in your community?

Do signs, phones, and barriers simply distract from the larger issue of creating better access to mental health care for people with suicide ideation?