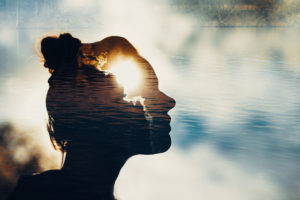 The condition that used to be known as “multiple personality disorder” is perhaps one of the most complex types of mental health condition. Though frequently depicted in movies and the media, since the 1994 publication of the 4th edition of the Diagnostic and Statistical Manual of Mental Disorders, multiple personality has not been recognized as a clinical diagnosis by the American Psychological Association. In its place is the more enigmatic-sounding, lesser known “dissociative identity disorder” (DID).

Though it’s been more than twenty years since this change, a Google search of “multiple personality disorder” still produces many times the results as a search of “dissociative identity disorder.”

What, then, is the difference between the two concepts, and why hasn’t DID gained more cultural traction?

The Rise and Fall of an Idea

The idea of multiple personalities inhabiting the same body, which appears to be a constant source of fascination to the public, has long been explored in fiction, poetry, and film. Robert Louis Stevenson’s famous novel Dr. Jekyll and Mr Hyde, first published in 1886, permanently imprinted the idea of the dual personality in the collective mind long before the popularization of psychological ideas.

When psychology and popular culture intersect so neatly, there is often a danger of the latter leading the former astray, as with this case. Increasingly, professionals came to recognize that the popularized concept of multiple personalities substantially distorted the real experience of those who had been diagnosed. Thus, in the DSM-4, the diagnosis of MPD was replaced with DID to emphasize it was dissociation, rather than multiple personalities, per se, that was particularly significant.

Increasing awareness of dissociation involves more than simply changing the name of the condition, however. To do so, I believe it is essential to consider these two key points.

First, having different personae is not what is unusual about dissociative identity. All of us are likely to behave and even think in substantially different ways depending on whether we are at work, at a party, with an old friend, a new partner, our children, and so on. What is different about people who have DID is the dissociation they experience when they transition between these personality states, dissociation that often leads to lapses of memory and a sense of discontinuity. In other words, what is unique is that their personality states are not integrated into a greater whole. As some people put it, rather than having more than one personality, they have less than one.

Another key point is that the dissociation between personality states is part of a spectrum of dissociative phenomena experienced by people who have DID. Dissociation can occur in the way the individual experiences the passage of time (i.e. flashbacks), consciousness (thinking about themselves as if they were a third or second party), their body (feeling that they are “out of body” or looking at themselves from the outside), and emotion (not experiencing normal emotions in response to stimulus or experiencing them only vicariously). In more extreme cases, dissociation might present as different personality states that may be startlingly dissimilar, but this does not mean there are actually two or more identities within the same body. Instead, DID can perhaps best be understood as a cluster of severe dissociative symptoms.

The Link Between DID and C-PTSD

As I discussed in an earlier article, dissociation is one of the most frequent and characteristic symptoms of complex posttraumatic stress (C-PTSD). Children who experience multiple incidents of abuse, neglect, or other forms of ill treatment at the hands of a caregiver may respond by detaching in some way from their situation as a coping or survival mechanism. This detachment, or pattern of dissociative thoughts, becomes a fixed part of their personality and persists into adulthood in radically changed circumstances. The stimuli triggering dissociative episodes is beyond the individual’s control and often also beyond their understanding. A central part of therapy for C-PTSD is the identification of these triggers and the development of responses that can help the individual avoid or manage dissociation.

It’s not surprising, then, that DID often co-occurs with C-PTSD. Indeed, one might go further and wonder whether the two should really be considered separate categories. Many people have criticized the “dynamic nominalism” of the DSM—in other words, the distillation of complex arrays of symptoms into concrete syndromes … until they are changed ten years later. Nothing illustrates this better than the history of DID. In the first two editions of the DSM, the phenomenon of split personalities was included as a category of what was referred to as hysterical neurosis. In the DSM-3, the terms ‘hysteria’ and ‘neurosis’ were omitted entirely and multiple personality emerged as a separate diagnosis, only until it was replaced in the DSM-4 with DID.

In this, I am reminded of the words of John Briere:

“If we could somehow end child abuse and neglect, the eight hundred pages of the Diagnostic and Statistical Manual (and the need for the easier explanations such as DSM-IV Made Easy: The Clinician’s Guide to Diagnosis) would be shrunk to a pamphlet in two generations.”