Are Attachment Issues at the Root of Narcissistic Personality? 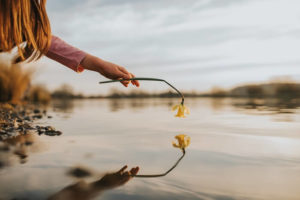 One school of thought is that narcissism is a result of arrested development, in which the person remains fixated at an infantile or very young age and only manifests in terms of their wants and needs. For example, an infant does not think about what their mother wants or needs; they are only concerned for the self. Similarly to infants, narcissists tend not to be concerned with the other person’s feelings, only their own.

It has been theorized that those who are “pathologically narcissistic” (a normal level of narcissism is essential for healthy self-esteem) are not fully “fixated” in a phase of early childhood development–the “me” phase, or narcissistic phase of development–but have instead developed pathologically. This affects their inner working models for self-love and object-love (the love of others).

People with narcissistic personalities often do not present seriously disturbed behavior and may function quite well socially and vocationally.

Narcissism in the Context of Object Relations

Objects are attachment figures. In object relations theory, the object is the person one attaches to in early development, usually the mother or primary caregiver. As a person progresses in age, new objects come along and become attachment objects as well.

These concepts set the stage for all of one’s future relationships, both with the self and others.

The Development of Narcissistic Defense Mechanisms

Narcissists tend to have one or both parents who are chronically cold and covertly aggressive. While they may appear superficially well-organized, they may have an underlying degree of callousness, indifference, and nonverbalized aggression when parenting (Kernberg, 1992).

Part of development involves differentiation of the self from the other, where normal reality testing should occur. When early attachment objects are inconsistent, abusive, or neglectful, the developing individual needs a psychological mechanism which allows them to escape the conflict between the need for the external object and the dread of it (Kernberg, 1992). Coping or defense mechanisms may then ensue.

People who have developed narcissistic personalities often do so because they have not been able to internalize a “good” object; rather, they have internalized a frightening one, one which they are unable to draw comfort from. Because of this, instead of attaching to others in a healthy manner, they utilize defensive coping mechanisms for relating. One of these is idealization:

These individuals identify themselves with their own ideal self-images in order to deny normal dependency on external objects and on the internalized representations of the external objects. It is as if they were saying, ‘I do not need to fear that I will be rejected for not living up to the ideal of myself which alone makes it possible for me to be loved by the ideal person I imagine would love me. That ideal person and my ideal image of that person and my real self are all one, and better than the ideal person whom I wanted to love me, so that I do not need anybody else anymore.’ —Otto F. Kernberg, MD, FAPA

In other words, the normal tension between actual self (developing child with unmet needs) and the actual parent (emotionally unavailable parent) on the one hand, and ideal self and ideal object on the other, is eliminated by the creation of a fantasy self-concept and fantasy other-concept within. Concurrently, the images of the “unacceptable” true self are repressed and then projected onto others.

Note: This is why people in relationships with narcissists are often devalued and discarded–they are receiving the narcissist’s projection of their true beliefs about self as well as the disappointment and anger of not really being an ideal or fantasy partner/child/object.

How Narcissists Relate to Self and Others

People with narcissistic personalities may find it difficult to internally grasp the basic concepts of healthy connection. They may not have experienced it in order to internalize it appropriately. Healthy relating and attunement might not have been sufficiently “mirrored” onto the developing child. Thus, the child has an attachment deficit.

Narcissists may be especially deficient in feeling deep emotions, such as longing and sadness, and in relationships with others, they may experience feelings of indifference. The deep emotions narcissists feel are most often those that relate to personal ego-injuries. In these cases, narcissists will feel the emotions of rage, envy, and resentment.

The types of primitive coping or defense mechanisms for relating to others include splitting (all bad/all good), denial, projection, grandiosity, and idealization.

In addition to this, those with narcissistic personalities will adapt themselves to the moral demands of their environment as a “payment” or “price to pay” in order to gain narcissistic supply, such as praise and admiration. Don’t be fooled. Narcissists only do that which brings them a payoff for self. They are not conforming to society’s norms for any other purpose. In fact, because of this narcissistic point of view, they may also believe others think the same way; hence, they project this viewpoint onto others, which is why they tend not to trust other people.

Narcissists are known to lack caring about the feelings of other people. They may see others as mere objects, put in place to meet their own needs. However, this can cause a problem for narcissists, because in order for them to benefit from the praise and admiration of others, those others must, on some level, have value.