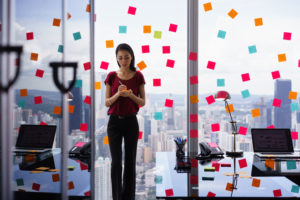 It’s another day at work. You’re preparing an upcoming presentation, checking your email every few minutes, texting your best friend, planning the weekend, and scrolling through Facebook—all while watching the clock and anxiously anticipating lunchtime. You’re multitasking, and you probably think you’re doing it well.

If you ask most people, chances are they will tell you they’re good at multitasking. Research tells us that isn’t the case. In fact, multitasking may actually make you less productive, even if you’re completing multiple tasks at once. According to Stanford professor Clifford Nass, the more you multitask, the less you are able to concentrate, learn, and even be nice to people.

Here are six reasons why you’re actually not as good at multitasking as you think you are:

Research indicates that the more you multitask, the less your brain is able to filter out information. When comparing the brains of people who multitask versus those who don’t, researchers found those who multitask not only have difficulty filtering irrelevant information, but they actually exert more energy using parts of the brain that aren’t necessary for the task at hand.

On the contrary, when you focus on one thing at a time, the brain is able to zone in and filter out the rest, leaving more of your brain’s resources available to what you are actually doing.

Frequent multitasking can change the neural pathways in the brain. When we are constantly scattered, it makes it increasingly difficult for the brain to sustain attention for even short periods of time. MRIs taken of individuals while driving indicate that adding just one more activity in addition to driving can reduce the brain’s ability to pay attention to the road. For example, when drivers listen to other people in the car speak, the drivers’ attention levels toward driving go down by about 37%.

Continuously switching back and forth between tasks makes the brain less available for the individual task at hand and ultimately lowers efficiency rather than improving productivity. A University of London research study indicated that people who multitask while performing cognitive tasks show significant drops in IQ (intelligence quotient) similar to those of people who had smoked marijuana or had not slept the night before. Something as simple as knowing there are unread emails in your inbox can lower IQ by 10 points.

Multitasking trains our brains to seek instant gratification. Constantly switching from task to task, checking your email, and scrolling your Twitter feed creates a constant need for feedback.

With each text message you send or email you respond to, your brain gets a surge of dopamine—one of the brain’s feel-good hormones—which encourages you to continue the rewarding behavior. This leads the brain to seek more instant gratification and makes it difficult to sustain the attention needed to work toward long-term goals.

When you don’t quickly receive that release of dopamine, you may become bored or uncomfortable and give up on the task in order to do other short-term tasks. While these tasks offer that reward more quickly, they are less rewarding in the long-term. This feedback loop may make you feel like you’re accomplishing a lot, but you may realize it doesn’t amount to much at the end of the day.

Research has shown multitasking lowers emotional intelligence and can actually make us less friendly. A study conducted by the University of Sussex concluded that individuals who used multiple devices at once (cell phone, computer, television, etc.) and who multitasked more often showed less brain activity in the anterior cingulate cortex—the area of the brain that governs emotional control and empathy.

According to multiple studies, chronic multitaskers have increased levels of the stress hormone cortisol. Normal levels of cortisol can be helpful for the body, but when levels are too high it can cause reproductive issues, increase inflammation in the body, raise blood sugar, weaken the immune system, increase belly fat, and damage the parts of the brain that control memory. Many people who multitask have issues with working memory, which can make it more difficult to make rational decisions.

Tips for Improving Your Ability to Single Task: