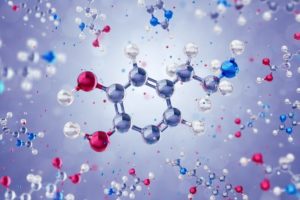 Many people are aware of dopamine for its role in regulating motivation and reward-driven behavior. Larger amounts of dopamine make people feel good, and this good feeling motivates people to repeat the behavior that triggered the good feeling. In this way, dopamine is an important part of survival. Behaviors that increase likelihood of survival, such as eating calorie-dense foods, are reinforced with the help of dopamine.

Where Is Dopamine Produced?

Dopamine is metabolized from tyrosine and phenylalanine. Neurons that use dopamine as their primary neurotransmitter exist mostly in the midbrain, which plays a large role in controlling motor function and managing sensory input, among other things.

When Is Dopamine Released?

Dopamine is released during situations in which people experience pleasure. The release of dopamine helps reinforce the pleasurable behavior, increasing the likelihood the individual will repeat that behavior to get the same feeling.

What Does Dopamine Do?

Dopamine is implicated in feelings of pleasure and plays a prominent role in addiction. People with substance dependencies may grow dependent partially because of the activation of dopamine. Some other ways dopamine affects the body include:

Irregular dopamine levels can cause a variety of psychological problems. For instance, Parkinson’s disease is caused partially by the death of dopamine-secreting neurons. Drugs that increase dopamine production may help people with Parkinson’s, particularly during the early stages of the disease.

There are a wide variety of activities that boost dopamine levels in the brain, but not all of them contribute to long-term health. Taking part in behaviors that increase dopamine while improving your health can contribute to the formation of good habits and boost your mood. Some ways to get a natural increase in dopamine include:

Dopamine is well-known for the role it plays in addiction. As it plays a key role in helping develop habits that support health and survival, so can it support the formation of self-destructive coping mechanisms.

Researchers have found that dopamine plays a similar role in many compulsive behaviors, such as compulsive pornography use, internet addiction, and compulsive gambling. These behaviors stimulate a similar rush of dopamine to the brain, establishing it as rewarding and reinforcing it as a habit. Individuals with these compulsions may feel as though they have lost control over that aspect of their behavior.

Dopamine also has significant function in some mental health conditions. A few of these include:

Research exploring the many links between dopamine and mental health is ongoing, and experts are still discovering all the ways dopamine is connected to behavioral health.

What If I Have Too Little or Too Much Dopamine?

Dopamine dysregulation could mean that the brain is producing too little or too much dopamine. Low dopamine, or dopamine deficiency, can be caused by a variety of factors, including conditions such as Parkinson’s disease, schizophrenia, and depression. Drug and sugar addiction have also been found to cause dopamine deficiency over time. Some low dopamine symptoms include fatigue, moodiness, dysphoria, physical pain, and changes in weight, sex drive, and ability to focus. As many other conditions share these symptoms, it’s important to consult your health care provider if you’re experiencing these symptoms.

It’s also possible to have too much dopamine. Effects of overly high dopamine levels include high libido, anxiety, difficulty sleeping, increased energy, mania, stress, and improved ability to focus and learn, among others. When certain parts of the brain are exposed to too much dopamine, for instance right after an individual takes illicit drugs, other behaviors may be present. These can include aggression, hallucinations, twitching, nausea and/or vomiting, and depression.

Because dopamine contributes to feelings of pleasure, a rush of dopamine can cause an immediate change in mood. Dopamine-producing drugs such as Adderall and Dexadrine are sometimes prescribed to people experiencing treatment-resistant depression. Medications that increase dopamine production can be highly addictive, and thus are not recommended for people with substance abuse problems. Some dopamine-producing drugs can also cause cardiovascular and renal problems, and people prescribed amphetamines and related drugs should be carefully monitored by a physician.