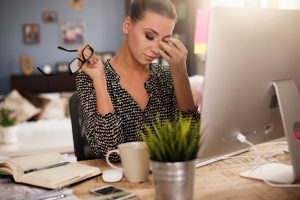 All of us become distracted sometimes. So many things compete so effectively for our attention. Multitasking is one response to this. But studies find that while multitasking carries an emotional reward—we feel more productive—it’s actually linked to lower levels of accomplishment and productivity. We’re going to look at a practice called bracketing as a more effective response to distraction.

Bracketing is a simple, three-step process. The first step is to acknowledge what’s distracting you. The second is to deliberately set it aside for the moment. And the third is to return to it later in order to address it.

Bob (not his real name) works as a computer programmer. His department is under a lot of pressure. Unfortunately for Bob, his manager makes use of everyone’s anxiety to keep them working hard. People get called on the carpet and sometimes let go. As a result, a lot of Bob’s colleagues are withdrawn and irritable, and work is a lot less safe than it used to be. Bob is frequently engaged in low-level surveillance. It’s a normal response to dangerous surroundings—think of being in the forest at night, where you’re alert to any noise in case it’s a predator. But as a result, Bob is distracted from the very work he’s pressured to complete. Simple problems are hard to solve. He wonders if he’s lost his edge, if he’s even in the right field.

To make things even rougher, Bob’s 15-year-old daughter, Madison, has started getting into trouble at school and he’s not sure why. She seems like a happy, well-adjusted kid, but maybe he’s missing something? Is it just a phase they all go through or is it a warning sign? Should he schedule a meeting with the school principal, or should he take her to see a therapist?

Bob and Vicky, his wife, have started having arguments about how to respond to Madison, as well as other issues. He’s begun wondering if his marriage is in trouble.

Often when Bob is writing programming code for one of his assignments his thoughts begin revolving around his daughter, especially if he’s happened to hear a story on the news about high school students. He can find himself having a brief fantasy conversation with Vicky about what the family needs, going over their last disagreement. Or he wonders if he’s in the right line of work, if it’s too late to start something different.

These lapses aren’t long, not usually more than two or three minutes. But they’re enough to distract him from what he’s doing. When he notices what’s happening, he makes a partial effort to suppress his thoughts. “I’ve got to focus,” he tells himself sternly. And then he begins thinking about how much pressure he’s under to get this current project to QA for testing, and how he can’t afford to have them send it back to him to fix something.

Bob doesn’t meet the criteria for attention-deficit hyperactivity, according to the Diagnostic and Statistical Manual. For one thing, he’s able to reflect on his own behaviors. For another, his symptoms of distraction didn’t start before he was 12, and they are clearly related to his current situations. Still, it would be helpful if Bob had some way of clearing his thoughts.

This is where bracketing comes in.

As Bob notices he’s become distracted, he briefly acknowledges what’s distracting him. Worry about Madison. The relationship with Vicky. Pressure at work.

Acknowledging—allowing yourself to notice something—is a key component of mindfulness practice. Buddhist nun and mindfulness meditation teacher Pema Chödrön describes this coming back to the present as recognizing what’s true in the moment without judging it.

Having acknowledged these issues, Bob sets them to one side. Sounds easy, doesn’t it? But how do you actually practice it?

When we set something aside, the implication is “for the time being.” We plan to come back to it at some point. My favorite show is about to come on, so I’ll finish doing the dishes after I watch it. It’s starting to rain; I’ll finish the yardwork tomorrow.

How Bracketing Differs from Procrastination

The difference between setting something aside and procrastination is in commitment to the follow-through. I intend to get back to the dishes when my show is over, and when the closing credits have finished I go back out to the kitchen. When the rain stops, next day I resume mowing the lawn.

This temporary setting aside is also different from thought suppression, or “trying not to think about it.” Some studies show that thought suppression actually reinforces the material we’re trying to suppress, which reminds us of the old saying, “Throw the devil out the door and he comes in the window.” Remember that the first step of this practice is to let yourself become fully aware of what’s claiming some of your attention.

This is the heart of this practice. This is what makes bracketing increasingly effective—when we come back to what we set aside. That we make a commitment to completing our own personal work.

Therefore, we schedule a specific time when we can give our attention to what’s distracting us. Bob tells himself, “I’ll concentrate on Madison when I get home from work.” He also decides to think about the situation at work when he takes his break. And he and Vicky can talk over dinner tonight—not just about Madison, but about their own relationship.

At this point, Bob hasn’t solved his problems, but he has scheduled specific times to engage with them.

The third step is to keep these appointments.

On his afternoon break, he strikes up a conversation with a man in the next cubicle. The two of them decide to take a walk and stretch their legs. As they walk, they talk about how tense it’s getting in the office. When Bob gets home, he sits down with Vicky and they decide to schedule a meeting with Madison’s principal before considering counseling. Later that evening, when Madison gets home, Bob makes a point of checking in with her. Nothing too intense—she’s not in the mood to talk. But he establishes that he will sometimes initiate contact for no reason other than contact.

This is the heart of this practice. This is what makes bracketing increasingly effective—when we come back to what we set aside. That we make a commitment to completing our own personal work. Consider that these issues wouldn’t come up as distractions if they weren’t important in the first place.

As with any practice, this one becomes more effective the more we repeat it. Put another way, we believe ourselves more as we keep our word to ourselves.

A recent article in the Harvard Business Review notes that the act of keeping promises to ourselves helps us be more fully realized versions of who we are. Carl Jung uses similar language in his concept of self—the organizing principle of both the conscious and unconscious areas of the psyche, or the “blueprint” of identity.

Bob gets through the week and now it’s Sunday afternoon. He and Vicky are visiting Vicky’s sister. Everyone’s in the backyard relaxing while chicken sizzles on the barbecue. Sounds like a nice time, doesn’t it?

But Bob’s having trouble enjoying it because he’s thinking about work tomorrow. The thoughts are intrusive and keep pulling him into a fantasy version of tomorrow morning and away from the present moment, even though this moment of ease and refreshment is just what he needs. But it’s almost as if he can feel it all trickling between his fingers and disappearing, leaving nothing but the apparent reality of work.

So he brackets the intrusive thoughts. First he acknowledges to himself what’s distracting him. This time he doesn’t really need to schedule it for later, because tomorrow morning he’ll be on the road to the office by 6:45. But he makes use of the formality anyway. Although there’s nothing he needs to do to prepare for work, he mentally tells the office he’ll see it at 8 a.m., knowing he’ll keep that appointment. And then he returns to attending to the conversation, the sunlight, and the smell of chicken on the grill, which is making him hungry.

Sometimes Bob wakes up in the middle of the night. His thoughts turn to different topics and become more active, so it can be hard to get back to sleep. Rather than trying to distract himself, he practices bracketing. Acknowledging whatever is present in his thoughts, whether it’s a meeting he’s not looking forward to or a medical procedure he’s been putting off, he determines when he will return to it in order to give it his full attention. And in the morning, or later in the week, or Saturday, he follows through. Again, it’s this follow-through that strengthens the practice and increases its effectiveness.

We live in a culture that bombards us with claims. Sometimes the best way to assess such claims is by experiment. Try the three steps of bracketing—acknowledgement, setting aside, and then returning to the issue—as a tool against distraction in your own life.