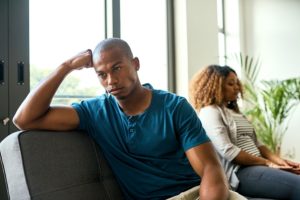 At least once a week, we get a call from someone who says, “I know our relationship needs work, but my partner won’t go to therapy with me. What can I do?”

More often than not, when one partner (not always the guy) suggests going to couples therapy, the other partner hears an alarm. Danger! Danger! A tsunami of anxiety floods the mind. Fear abounds. Automatic thoughts start racing: “I’m not talking about our relationship with a stranger. How are they going to fix our problems? What could they possibly say that would make a difference? If you would just (fill in the blank), our relationship would be fine. Who is this therapist? What are they going to think of me? Will they like me? What if they tell me I’m wrong? We can fix this ourselves.”

In response to this resistance, the first partner either escalates the conversation, resulting in an argument, or stops talking and walks away feeling frustrated and hopeless.

So how can you convince your partner to go to therapy with you? Here are five suggestions:

1. Address the objection or fear. Beneath the surface of defensiveness is fear. If it’s not obvious, you might ask your partner, “What concerns you about us going to therapy?” Once you identify that fear, you can address it. A sample conversation:

Him: “I don’t want someone telling me what to do. We can fix this ourselves.”

Her: “I wish we could, but we have been trying to do that with no success. An objective point of view would be helpful.”

Him: “How is a stranger going to fix our problems?”

Her: “I read about the therapist on her website, and she works with other couples just like us. Let me send you the link.”

Him: “If you would just (fill in the blank), our problems would be solved.”

Her: “I know I have a big part in resolving our differences, but it takes two people to have a conflict and two people to solve it. It’s important for each of us to look at our part and how we can improve our partnership.”

2. Describe the benefit to your partner. Think from your partner’s perspective. What would he or she get out of going to therapy? For example: “If you went, it would make me very happy; it would show me you are making an effort; it would make me feel like we’re truly partners; it would help us understand each other better; we would learn some new skills/techniques that would decrease our arguing so we would feel closer and be able to have more fun; if we felt intimate more of the time, I would feel like having sex more.”

3. Pique his or her interest. Find an article, podcast, or YouTube video and ask your partner to read, watch, or listen. You can use this as a conversation starter. Ask your partner what he or she thought about it or what part he or she related to. Then share your thoughts. Make your partner the expert on the topic and ask if he or she thinks most men/women feel that way.

4. Use a “coaching” model. Often, people think couples therapy is only for people who are deeply troubled. Describe going to the sessions as “relationship coaching,” putting the focus on learning skills and techniques, not changing him/her or his/her personality. Many men in particular often can relate to a coaching metaphor, as sports teams need a good coach to be their best.

5. Ask your partner to go just once and try it. Assure your partner that it is fine if he or she doesn’t want to go back after the first visit. He or she may resist less if it’s understood that he/she doesn’t have to commit to the therapeutic process. After the first session, he or she may see the value and want to continue. Also, this moves the fear of the unknown out of the way.

You might want to use one or several of these ideas when you approach your partner. The bottom line is that one person can work on his or her part of relationship issues, but there is much more that can be accomplished when both partners avail themselves of the process.

For more information about helping a loved one who needs therapy, click here.