Top 10 Myths: A Guide to Everything OCD Is Not 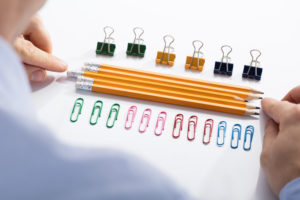 “I need to go organize my planner. I’m so OCD.”

“I’m obsessed with color-coding my pens and ordering my books by size and color. That’s my inner OCD talking.”

OCD, short for obsessive compulsive disorder, is a widely misunderstood condition. It has become synonymous with a quirky preoccupation with order. Television characters such as Monk use their apparent OCD like a superpower that helps them solve crimes, see things other people can’t, and access a superior form of consciousness. Needless to say, these stereotypes are not an accurate depiction of OCD.

Turning OCD into a joke or superpower can trivialize the lived experiences of people with the condition. OCD affects about 2% of Americans at some point during their lives. Symptoms can be a source of embarrassment and fear. They can also interfere with daily life.

When myths drown out the voices of people with OCD, this diagnosis can be stigmatized. Jokes can be hurtful to people with OCD. They may create false expectations in family and friends. Stigma may even deter people from seeking treatment.

So if OCD isn’t a quirk or crime-solving skill, what is it? Below are 10 common myths and the facts to debunk them.

Myth #1: OCD is a mental superpower that can make you a brilliant doctor, detective, or inventor.

Fact: OCD is not a superpower. It often gives a person racing, uncontrolled thoughts rather than superhuman logic.

OCD involves recurring, intrusive thoughts called obsessions. These obsessions may cause someone to worry about details other people would ignore. Someone with OCD often tries to control their obsessions with mental or physical rituals (compulsions).

For instance, a parent may worry constantly about their child getting into an accident. To calm themselves down and control their thoughts, the adult performs a compulsion. This behavior could be checking door locks or rearranging toys to be exactly symmetrical.

These actions can feel irresistible. Those who try to resist compulsions may feel overwhelming panic. Intrusive thoughts may make it difficult to focus on outside tasks until the compulsion is complete. Compulsions and panic attacks can both consume a person’s time.

People with OCD can be brilliant and often thrive in various careers. Yet “genius” is not a feature of OCD. In many cases, OCD is an impediment to success for an otherwise brilliant or capable person.

Myth #2: All people with OCD obsess about cleaning.

Fact: Cleaning is just one of many OCD-related compulsions.

Many people with OCD have fears of contamination. They may worry about getting sick or exposing themselves to germs. To relieve these fears, some people with OCD compulsively wash their hands, use sanitizing sprays, or clean their homes to excess.

People with OCD engage in compulsions to reduce anxiety caused by obsessions. Not all people with OCD have obsessions about cleanliness. In fact, the DSM-5 does not even list fears of contamination as diagnostic criteria for OCD. Research from 2010 found compulsive checking, not cleaning, is the most common symptom of OCD. Among study participants, 79.3% reported having a checking compulsion at some point in their lives. Meanwhile, only 25.7% of participants reported contamination symptoms.

People with OCD may even be messy. The same 2010 study found 14.4% of people with OCD engage in compulsive hoarding. Someone who hoards collects objects without throwing anything away. A person who hoards likely has a disorganized home.

Some people with cleanliness obsessions only fear certain types of contamination. They may fear using public restrooms but be fine with a dirty car.

Myth #3: Someone with OCD will have the same obsessions their entire life.

Fact: The themes of OCD symptoms can change over time.

People with OCD engage in compulsions to reduce anxiety caused by obsessions. Both compulsions and obsessions can change with time.

The underlying emotions—fear and anxiety—remain the same even as symptoms shift. In most cases, a person with OCD continues to experience fears across a common theme. Age, culture, and life experiences can affect these themes.

For example, a 12-year-old with OCD may be plagued by thoughts of their parents dying. At 25, that same person may fear the loss of their spouse. The specific worry has changed, but the underlying fear (losing a loved one) has not. The compulsive behaviors used to reduce anxiety can also shift.

Fact: A complex interaction of factors cause OCD. Bad parenting is rarely the cause.

Like most mental health conditions, OCD is a complex diagnosis with many potential causes. Research suggests OCD often has a strong genetic component. If a person has a parent or sibling with OCD, they are twice as likely to have OCD themselves. Environmental factors such as trauma can also contribute to obsessions and compulsions.

Typical parenting—even when it’s imperfect—does not cause OCD. Using daycare services or gentle discipline will not cause obsessions or compulsions. Parents do not need to blame themselves for their child’s OCD. Attempts to blame a parent can undermine treatment by making both the parent and child feel guilty.

While typical parenting does not cause OCD, abuse might. People with a history of trauma and neglect are more likely to be diagnosed with OCD. Therapists who treat OCD may wish to ask about a person’s experiences with abuse. When a child with OCD is living in an abusive home, treatment may require removing the child from the home.

Myth #5: OCD only shows up in privileged people who have too much time or too few problems.

OCD appears in cultures across the world (although some symptoms are more common in different nations). In the United States, OCD has roughly the same prevalence rate across ethnicities. It is slightly more common in women than men.

Fact: Many people with OCD already understand their actions don’t have a “logical” basis.

Compulsions are a way to temporarily alleviate anxiety. Most people with OCD realize their actions are irrational and won’t prevent a tragedy. Instead, compulsions often serve to reduce anxiety about obsessions. In other words, someone with OCD may do a compulsion because they believe it is easier than enduring their intrusive thoughts.

Many mental health conditions cause people to behave in ways that seem illogical from the outside. Pointing out that a behavior is irrational does little to help. Criticizing a person with OCD for being “irrational” may make them ashamed or self-conscious. The person may become reluctant to discuss their symptoms further. Stigma is often a barrier to mental health treatment.

Myth #7: People with OCD are nit-picky and controlling.

Fact: OCD is a mental health condition, not a personality trait.

People with OCD struggle to and control their own thoughts and emotions. Their compulsions are an outward manifestation of this struggle. A person may try to control their environment in order to do compulsions.

OCD is a mental health diagnosis. Describing OCD as a personal quirk or a joke ignores the very real needs of people with this condition.

For example, a person with OCD might rearrange furniture to address their symmetry obsession. Another person might slow down a group tour because they’re busy counting bricks. Such behaviors do not come from a desire to control others. They come from a person’s desire to control themselves.

A similar-sounding diagnosis, obsessive-compulsive personality (OCP), does manifest as a fixation on control and order. In OCP orderliness and perfectionism can become a person’s most visible traits. They may fixate on rules to the point that they do not complete tasks. People with OCP may struggle to cooperate with others who don’t share their strict standards.

People with OCD have a wide range of personalities. Some are stubborn and controlling with others. Other people with OCD are easy-going around others and strict only with themselves.

Fact: Compulsions are not always visible to others.

Not all compulsions are visible. Mental compulsions include behaviors done within one’s mind. They may include praying, counting, repeating a phrase, or avoiding specific thoughts. A person who seems distracted to others may be very focused on mental compulsions.

Even when a person’s compulsions are physical, others may not see them. People with OCD often feel ashamed of their symptoms. They may avoid doing compulsions in public, even if the delay causes intense anxiety.

Myth #9: People with OCD are dangerous.

Fact: People with OCD are not any more likely to commit crimes than anyone else.

People with OCD often feel guilt and shame for having these thoughts. Even if they have no intent of doing these actions, they may worry about “losing control.”

Yet people with OCD are no more likely than others to hurt people or commit crimes. In many cases, obsessions stem from a desire to protect others. Intrusive thoughts cause distress because they often go against deeply-held morals.

It’s true that OCD probably won’t get better on its own. People with OCD can’t think or will their way out of their feelings and compulsive actions. Yet there are many treatments that can help with both obsessions and compulsions. These include:

Some people with OCD may wish to combine multiple treatments. A mental health professional can help someone create a comprehensive treatment plan for their unique needs.

OCD is a mental health diagnosis. Describing OCD as a personal quirk or a joke ignores the very real needs of people with this condition. Consider some reasons not to use OCD as a joke:

What if You Think You Have OCD?

It is very difficult to accurately diagnose OCD over the Internet. If you think you have OCD, you may wish to find a therapist. A professional can determine whether your symptoms represent OCD or another condition.

People who have OCD symptoms likely need treatment. A self-diagnosis will not give you access to that. If you think you have OCD, you can contact a family physician or mental health provider for help.