Family Strain: Is There a Benefit to Breaking Ties? 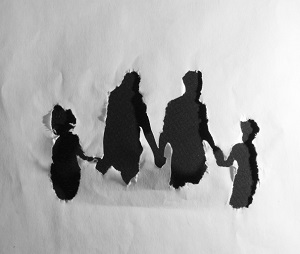 Family harmony is a dream we all share. Wouldn’t it be great if we could function, day to day, like our favorite television families? Sure, life would come along with a one-two punch, but because we are so connected, in sync, funny, and resilient, by the end of the day we would land on our feet, together. Whether you relate more to the family of The Cosby Show, Malcolm in the Middle, or Family Guy, those families always come out wiser and still united in the end.

Real families aren’t so predictable. Marriage, child rearing, going to work, moving across the country, cleaning the house, going to school, loaning or borrowing money, having medical problems, dealing with one another’s moods; this is family life. It’s a messy marathon, and some of us find the experience more painful than others. Into some families comes divorce, or alcoholism, or mental illness, perhaps poverty or abuse. These families struggle to be connected and have positive relationships. And with enough pain, some of us walk away from our families and never look back.

There are times when it may be wise to create some emotional distance from our relatives. We don’t need to be intensely involved with every member of our family all the time. Our family systems have their own sense of rhythm. Varying closeness and distance is a natural process that brings balance in the dance of maintaining manageable emotional energy. We all do it, and it is a function of every close relationship we have.

Some of us have the experience of deliberately cutting off connection, particularly with one or both of our parents, for an extended period of time. We have another argument, the phone gets slammed down, and something inside us closes. We have run out of energy to explain, defend, and extend ourselves and we just need a rest from that intensity. Such periods of distance and recovery are common in families. You may be in one of those periods right now. It may feel like a burden has lifted, and you vow you’ll never go through that, whatever that was, again.

But here’s the thing: while shorter times of disconnect won’t interfere in your life, years of emotional shunning can. When we cut out a key family relationship from our life, it takes quite a bit of energy to keep that emotional door closed. And, any positive emotional energy that that relationship could provide us with is gone. While the bad stuff is not active, neither are the benefits. We compensate for that missing support, interaction and connection by leaning more heavily on other close relationships, like our marriage, our children, and our job. Our other relationships can take the extra expectations for awhile, but they can’t provide extra emotional stability indefinitely. Those relationships can get stressed. And then instead of one cut-off relationship, people can find that they are being distanced or shut out by other key relationships. Loneliness, isolation, and distress can erupt, seemingly, “out of nowhere.”

I believe that we are better-balanced human beings when we strive to maintain some measure of openness and connection with all the key people in our family system. It’s like the water pipes that feed my basement sink. In Minnesota, winter temperatures can dip well below zero. I’ve discovered that when the temperature is that low, the pipes to that sink can freeze. Frozen water pipes are one problem I don’t want. I have learned that if I keep the faucets slightly dripping on the coldest of nights, I prevent a huge problem. Drip, drip, drip: that’s all it takes to keep my pipes working. Drip, drip, drip is all the energy you really need to expend to keep connected to the most difficult family members in your life. You don’t need to open your emotional “faucets” very far to prevent your own emotional system from freezing up.

This can look like a birthday card, a call on a holiday, an invitation to a family event. It can mean returning an email graciously, showing up for an anniversary dinner, knowing your parent’s cell phone number. It means simple connection, the kind that keeps families functioning, particularly at times of high anxiety or emergency. I don’t want to have the first connection I have with my mother for years be in the Intensive Care Unit of the local hospital.

For me, it boils down to this: we need each other, particularly our core family members, to be in our emotional world. Don’t cut someone off from your life completely. The relief you feel is short lived, and the pain can last a lifetime.