Offerings and Sacrifices: Honoring Our Ancestors Helps Us Give Thanks 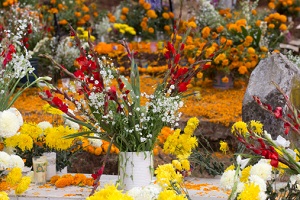 As a Yoruba priest, I frequently make offerings to the Orishas (divine spirits who guide our lives) and my ancestors. The type of offering varies, with the simplest being a white candle, glass of water, white flowers, and a bowl of fruit on my ancestral altar. We Yoruba also make offerings we call “Ebo.” The expression is to “do Ebo” in order to ask for something we want or to give thanks for something we have received.

In this article, I’d like to expand the notion of “doing Ebo” to include those actions/offerings, perhaps not as obvious, that we all take and make in honor of the divine or the ancestors. To illustrate this, I’ll tell a personal story.

For the past year, I’ve been doing extensive research on my family of origin. As far as I can tell, just about all of them have passed on. They were never very forthcoming about family history when they were alive.

One person, however, my paternal uncle, loomed very large in the family constellation. Not much was said about him by my paternal grandmother or my father. To me there was also a great deal of mystery surrounding him. I never knew where he was buried, when and where he died, or who he really was. All I did know was that he had drowned when he was 22, allegedly after getting a cramp while swimming in a lake.

When she was alive, my grandmother continuously eulogized him. I believe she suffered from what can be called pathological mourning, which is when someone experiences a loss so devastating it haunts him/her throughout, and interferes with, his/her life. My father rarely talked about his brother who was clearly the favorite son. I was going to be named after him (but in the end I wasn’t). All I gathered from them was that he was a budding superstar, on his way to law school, brilliant, talented, and full of promise. In other words, a tough act to follow.

Through research and an off-hand conversation with my father’s second wife, I managed to find out where he died and was able to get a copy of his death certificate. The death certificate told me where he was buried. I visited his grave and did an Ebo, which consisted of some simple offerings and prayers. During the visit to the gravesite, I was struck by the powerful impact his death had on my grandmother and father (and, hence, on me). It was an overwhelming and, for me, life-changing experience.

Jump ahead to this past April. I’m taking my dog to a canine internist in West Caldwell, New Jersey. The plan is to continue on to my house, upstate. I ask for directions from the receptionist at the office who tells me to make a right, then take Route 46, which would then get me to Route 23. I follow her directions and take 46 West. I’m driving and driving, sensing that I’m going the wrong way. But thinking, at some point, I was going to be heading in the right direction. Lo and behold, after more than an hour, I see a sign that says Delaware 7 miles, and I know I’m way off track. I keep going hoping to see a highway heading north. Within minutes I see the sign and then drive past Budd Lake—the very lake my uncle drowned in 72 years ago! I don’t stop but clearly feel he has been calling me to that place to remember him, and to bear witness to what had happened to him. I also felt he wanted something from me.

One of my spiritual advisors suggested I go to a local church and have them say a mass for him. Since my ancestors were Jewish, that didn’t feel right. So I went to the local synagogue, near my house, and was told that they were going to have a Yiskor (a ceremony honoring the dead) on May 20, which seemed appropriate.

Start time for the Yiskor was 9:30. Turned out it was also a holiday (the day that God gave the Ten Commandments to Moses). Unbeknownst to me, that was going to be acknowledged first. So as a group we prayed, and prayed, and prayed and finally about 11:30 a.m. we got to the Yiskor. I prayed for my uncle and my family and touched his photo to the Torah. I cried at his loss and prayed for his elevation. I didn’t leave there until after noon. It was the longest time I had ever spent in a synagogue, certainly the longest time I had spent reciting Hebrew prayers (in English, of course).

When it was over, I genuinely felt that I had done an Ebo. The Ebo was not only finding out about the Yiskor, but also spending far more time than I had intended remembering my uncle. I know he appreciated it.

So think about those sacrifices/offerings you have made for others, living and dead, in your life and take comfort that in doing so, you have been blessed accordingly.