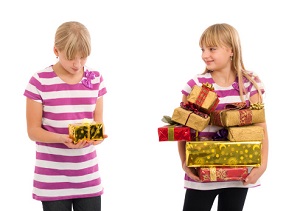 Favoritism is the tendency to offer unearned affection, benefits, gifts, or opportunities to a person or group based on personal feelings.

Favoritism occurs any time one person out of a group receives special benefits that they have not earned, and most people display favoritism in at least a few contexts. Examples of favoritism include:

Many people tend to show favoritism to people they believe are like them. A parent might be more empathetic toward a child who is most like that parent; an employer might offer special benefits to an employee he/she wishes to mentor or who comes from the same group as the employer. Favoritism can also play a role in racism and other forms of prejudice, and people in positions of power often must actively work to combat favoritism and avoid implementing unfair or discriminatory strategies.

Favoritism is a common theme in family therapy when a child or other family member feels that he is less favored than another family member. Whether this favoritism is real or perceived, it can have serious negative consequences for a person’s self-esteem and behavior, and can interfere with family relationships. Victims of favoritism—people who are disfavored—can suffer chronic frustration and feelings of worthlessness. Occasionally, they may seek mental health treatment to deal with the depression and anxiety that can sometimes result from such treatment. Even therapists are susceptible to displaying favoritism and must work to actively combat a tendency to favor people who remind them of themselves, who are members of their group, or who they perceive as more likeable.

Race theorists have argued that people in privileged racial groups must be aware of their tendency to show favoritism to their own racial group; this awareness may be the first step in avoiding discriminatory practices.