Ignore, Respond, or Tell Someone? Dealing with Bullying 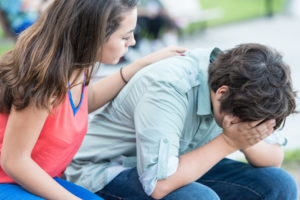 There are many reasons bullies tend to target particular individuals, including appearance, race/ethnicity, sexual orientation, or gender identity, but perhaps most motivating of all is the knowledge they can somehow get away with it and that their bullying has the desired effect.

Many people engage in bullying in part to avoid facing their own problems. This is true of children and adults alike. They think that by putting someone down, they will feel better about themselves. They may have difficulty empathizing with their target or be angry about having been bullied themselves. After all, people who have been bullied are more likely to engage in bullying behavior. In many cases, bullying behavior may reflect the insecurities of the person lashing out.

The potential negative symptoms of being bullied are well-documented. They may include depression, anxiety, suicidal thoughts, loss of expressed interest in activities that used to be fun, health complaints such as headaches and nausea, and a decrease in academic achievement. Children may tend to avoid school or other places where a bully could be present.

What to Do If You’re Being Bullied

If you’re experiencing bullying and are unsure how to respond, start by asking yourself these questions:

You have three primary options if you’re being bullied, depending on whether the bullying behavior is violent/aggressive or not: ignore, respond, or tell someone.

If you are being bullied and feel there is no way out, please consider calling the National Suicide Prevention Lifeline (1-800-273-8255).

Five of a group of 37 studies analyzed by Yale School of Medicine researchers reported children who had been bullied were up to nine times more likely to express thoughts of suicide than children who had not experienced bullying. If you are being bullied and feel there is no way out, please consider calling the National Suicide Prevention Lifeline (1-800-273-8255). Additionally, these websites may provide helpful resources:

The good news is bullying eventually stops, even though you might think it doesn’t. How you respond (or don’t) to bullying may affect how quickly that happens. Remember that you are not the problem; the issues are with the person who is doing the bullying, not with you. You are not alone, and help is always available.