Bullying in America: How Some Are Pushing Back 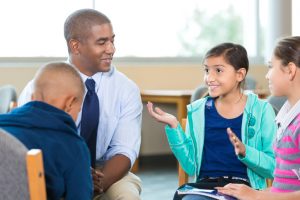 Sticks and stones may break my bones, but words will never hurt me.

If only the old playground comeback were true. The fact is, as most of us know, words can hurt. Whether they are used to mercilessly taunt a classmate or deride a group of people for the way they look, words can be used to abuse others. The scars they leave may not be visible, but they are no less real than those inflicted by other forms of abuse.

As defined by the Centers for Disease Control and Prevention, bullying refers to unwanted aggressive behavior and a repetition (or likelihood of a repetition) of that behavior when there is an observed or perceived power imbalance. Studies indicate between 1 in 4 and 1 in 3 students say they have been bullied at school, with verbal and social bullying being the most common types.

Long dismissed by many as a part of growing up, bullying is increasingly being recognized as a serious issue with potentially harmful consequences—for both the bullied and those doing the bullying. According to the U.S. Department of Health and Human Services, those who are bullied are at a greater risk of depression, anxiety, decline in academic performance, and suicide, while those with a history of bullying others have a greater risk of developing substance abuse issues, engaging in criminal activity, and being abusive toward partners and children in adulthood. Although there is a growing awareness of bullying and studies suggest rates of bullying may be declining, it remains a prevalent and serious problem among children and adolescents in schools.

Growing from the Pain of Bullying

“In life, you will meet two kinds of people: ones who build you up and ones who tear you down. But in the end, you will thank them both.” —Unknown

While the quote above is not universally true, sometimes our most painful experiences can turn out to be our most valuable lessons.

How we respond to painful experiences—our ability to “bounce back”—is dependent on a number of factors, from genetics to familial support and prior relational experiences. Ultimately, though, no matter where you came from or your genetic predispositions, everyone has the power within them to transcend painful experiences. Within most of us is a hurt soul, but in good company with that soul is a powerful force that has our back at all times, whenever we’re ready to access it. Some are fortunate enough to have the knowledge and the resources to do that, whether it’s through the support of a friend or a mentor, or simply an innate strength and belief in oneself. Some even become empowered by their pain.

Laughing All the Way to the Stage

In his one-man show about his journey from being a bullied kid to becoming a successful actor and comedian, Jim Dailakis thanks his bullies for inspiring him to become stronger, fitter, and “a hell of a lot more confident.” Threatened and ridiculed throughout primary school for looking “different,” Jim took up martial arts to protect himself against the physical abuse he was threatened with daily. Becoming proficient in karate helped him build strength, both emotionally and physically. “Although the memory of being bullied will always be a painful one, in some respects it allowed me to turn all the negativity into something positive,” he said (personal communication, October 30, 2016).

If you’ve ever seen the show Everybody Hates Chris, you’ve had a glimpse into what adolescence was like for comedian Chris Rock. Growing up as the only black kid in his school, he endured physical and verbal assaults on a daily basis. Writing and comedy were his outlets; he describes writing the show as cathartic.

Michael Phelps, Sandra Bullock, Kate Winslet, and Jessica Alba are other examples of celebrities who have “turned their fear into fuel,” as Alba has put it.

“We’ve all been the victim. Unfortunately, we’re also the cause. Help us change.” —Kind Campaign

We all have pain, but many people don’t necessarily know what to do with it. Unfortunately, some choose to cope by taking their pain out on others and becoming bullies.

We all have pain, but many people don’t necessarily know what to do with it. Unfortunately, some choose to cope by taking their pain out on others and becoming bullies. If we can teach kids alternatives, we can potentially break the cycle.

That’s the mission of the Kind Campaign, a nonprofit organization focused on girl-against-girl bullying launched by Molly Thompson and Lauren Paul (wife of actor Aaron Paul). When Lauren was in middle school, her best friends suddenly turned on her, alienating her from the rest of the school. If you’ve ever been a seventh-grade girl, you can appreciate how excruciatingly painful this is—so painful that, for Lauren, it led to severe depression and a suicide attempt.

Millionaires Against Bullying is an organization and “reality show” whose mission is to eliminate bullying at every level through fundraising and other services, including a coaching program for people who bully, victims of bullying, and their parents. “We know that bullying is an epidemic in our schools, but it also happens at every level of society,” said Mark Cliett, who serves on the MAB board of directors and as secretary/treasurer (personal communication, October 29, 2016). “We believe (these programs) will help us to reform bullies and to counsel them while at the same time counseling the victims of bullying, (and) will help stop this vicious cycle at a young age and eliminate it in future generations.”

The fact these campaigns and prevention programs are increasingly being recognized and implemented in schools is promising. It is also likely a factor in the apparent decline in reported bullying. With continued awareness and efforts to educate and inform, there remains hope for a brighter—and kinder—future.

Words are powerful weapons, and we all must be mindful of how we use them. As much harm as they can inflict, they also have the potential to do great things. Whether we use them to hurt or to heal is our choice. I choose healing, and hope my words—and the words of the courageous people who have reached out to me—help others to realize they are not alone. In the words of Wilson Phillips, a mantra that got me through some pretty rough school years: “Things can change, things’ll go your way, if you hold on for one more day.”