Can IQ Tests Really Predict Your Success In Life? 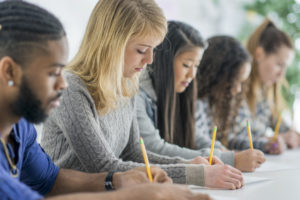 Dozens of online intelligence tests promise to measure intelligence and even to predict a person’s future success. Most of these online quizzes are not supported by research. Instead, psychometric testing typically relies on Intelligence Quotient (IQ) tests. These include the Weschler Adult Intelligence Scale, the Multidimensional Aptitude Battery, and the Kaufman Brief Intelligence Test.

The Challenge of Defining Success

Success is a vague, broad concept. It means vastly different things to different people. Some examples might include:

IQ scores cannot measure every type of success. In fact, it is difficult for IQ scores to fully and accurately measure even a single type of success. While there is some correlation between IQ scores and financial or career achievement, even these categories are broad and nonspecific. Individuals can have different goals for the same category. For example, one person may have a low-paying job that they find personally fulfilling. Another person with a high-status job might develop workplace issues like boredom or burnout.

IQ Scores and Other Correlates of Success

A handful of studies have found a modest correlation between IQ score and success in the workplace. For example, a 2004 study found that IQ is a good predictor of both a person’s ultimate career level and their success within that field. People with higher IQs tend to occupy more prestigious careers and to excel in those careers. The study theorizes that this is because people with high IQs can master new skills more quickly. In highly demanding fields—medicine and law, for instance—the ability to process and retain new information is key.

Various studies have shown IQ correlates with income, but the extent to which this is true varies significantly. In a 2007 review of research on IQ and income, most studies found low to moderate correlations between income and IQ. IQ was about as good of a predictor of success as parental socioeconomic status.

Research shows many individual and social factors also affect a person’s outcomes. Some individual factors that may affect success regardless of intelligence include:

Social factors that can affect success include:

The correlation between IQ score and socioeconomic status suggests IQ tests may measure access to opportunity rather than innate qualities.

For example, research published in 2011 found a heritability rate for intelligence of just 5% among children of low SES. Heritability measures the extent to which differences between individuals can be explained by genetics. A 5% heritability rate means nongenetic factors explain 95% of intelligence differences. Experiences like food insecurity or homelessness are more likely to affect an impoverished child’s IQ than their biology.

The same study found a higher heritability rate for intelligence among more privileged children—50% on average. The study authors believe high-SES families may be able to provide more chances to realize differences in children’s genetic potentials. Families with more economic means are often better situated to do things that boost intelligence, including:

Research also points to a class bias in IQ tests. Children raised in households with lower socioeconomic status participate in fewer conversations and hear fewer words than children from more privileged backgrounds. Middle and upper-class children who take IQ tests are more likely to have heard the words and been exposed to concepts on the test.

Critics argue this trend biases tests against poorer children, measuring their experiences rather than their raw reasoning skills. Other people claim this bias actually makes IQ tests a more reliable measure of success. They argue these tests measure cultural knowledge that may affect a child’s ability to fit in, understand the world, and ultimately succeed.

A significant body of research questions the validity of IQ scores as a measure of intelligence. Some researchers are skeptical of the very notion of general intelligence, which is what IQ tests purport to measure.

IQ tests may also discriminate against certain groups. Many early IQ tests are now widely acknowledged to have been biased, perhaps even by design, against people of color, women, and other marginalized groups. Today’s IQ tests are not deliberately discriminatory but may still be biased. IQ tests may inadvertently test not for intelligence, but for cultural knowledge that dominant groups are more likely to have.

Groups historically exposed to oppression can also experience stereotype threat when taking standardized tests. When a person is exposed to stereotypes about their group, their stress levels may rise. Anxiety in turn can undermine their performance. Even something as seemingly innocuous as filling a demographics survey before taking a test may activate stereotype threat.

The Role of Other Forms of Intelligence

According to Gardner, most people are competent in a few areas, with limited skill in others. It’s very unlikely that anyone could show total mastery in all nine areas, undermining the notion of a true general intelligence.

Even in intellectually demanding careers, emotional intelligence is often necessary. For example, a 2014 study shows emotionally intelligence correlates with the success of medical students. According to the study, the ability to regulate one’s emotions was an especially significant predictor of success. The study even recommends medical schools use emotional intelligence measures on their applications.

A 2010 study found the ability to regulate emotions was a predictor of higher income and socioeconomic status. It also predicted greater overall well-being.

Therapy: A Path to Success Regardless of IQ

People concerned about their intelligence or their path to success can find significant help from therapy. In a limited number of circumstances, therapy can even help someone feel smarter or perform better on an IQ test. For example, a person with testing anxiety may reduce stress through therapy. Likewise, a person who struggles with motivation or impulsivity may learn more effectively after tackling these issues with a therapist.

Even when therapy doesn’t directly improve intelligence, it can still greatly increase a person’s chances of success. Therapy may:

A licensed therapist can help you feel smarter and more successful. Find a therapist today!