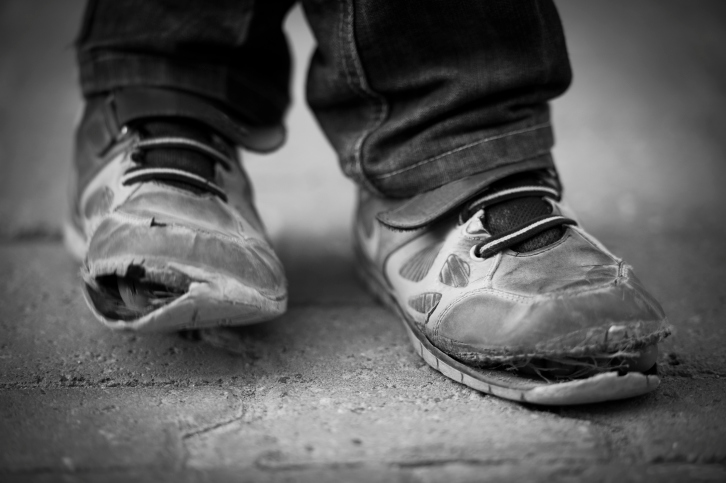 Poverty is a serious problem that occurs when a person does not have adequate financial resources to meet basic needs. Women with children are the fastest growing population experiencing poverty.

Though poverty generally refers to a lack of income or wealth, it can also be described as a condition preventing an individual or family from obtaining the necessary resources needed to maintain the standard of living customary in their society.

According to The World Bank, an individual is considered to be living in poverty when living on $1.25 or less a day. Recent estimates show that 14.5% of the world’s population, just over 1.3 billion, lives in poverty. In the United States, 45.3 million people live in poverty, or 15.1% of the total population. Eleven percent of those living in poverty are families.

Those who make up the lower-middle class in the United States may not be considered to be living in poverty, but their income levels are still very low: some live on less than $2 a day. Many families who have enough income to be considered lower-middle class, or above the poverty line, still struggle financially to meet basic needs such as health care, housing, and transportation. Some can also often be described as “food insecure”: They are not starving, but neither do they have enough food to meet nutrition guidelines. More than 49 million Americans live in food-insecure households, according to the latest research.

Factors That Contribute to Poverty

Poverty is generally not a result of just one or two causes. Rather, several factors often work together to lead to a state of poverty.

Many countries experience significant poverty as a result of historical occurrences such as colonization and slavery, as some countries that developed with societal inequalities have difficulty eliminating that pattern of distribution of wealth. In many cases, the systems that put the power in the hands of a small minority remained intact for years, even after the country gained its autonomy. Thus, the majority of people continued to struggle to rise in society and obtain access to public services such as schools and medical care. Similarly, countries that were exploited by others for resources are, in some cases, still experiencing the effects of that exploitation today.

High population rates can also have a large impact on a country’s poverty. For example, countries that experience high fertility rates but a decreasing child mortality rate may struggle to obtain enough resources to feed the population, which may cause the resources that do exist to rise in price. This scenario can then lead to an increase in child labor and illiteracy, two concerns that stem from poverty.

While not all individuals who live in poverty are homeless, the two conditions are often linked. Some people living in poverty are unable to afford stable housing, for example. The definition of homelessness includes those living in shelters, transitional housing, and public places, and it is also sometimes broadened to also include those who are temporarily staying in someone else’s home due to economic necessity. It is estimated approximately 3 million people in the United States are homeless at some point each year.

Lack of affordable housing is one factor that contributes to homelessness. Since 2000, incomes have decreased for those in low-income brackets, but the cost of rent has risen steadily. This discrepancy between income and rent has increased the rate of homelessness over the past few decades. Other factors often contributing to homelessness include lack of affordable health care and domestic violence. For people who are living paycheck to paycheck or struggling to pay rent, for example, a medical condition that results in loss of wages and expensive medical bills can ultimately lead to homelessness.

The link between homelessness and addiction is a bit more complex. There are higher rates of addiction among the homeless population, but that does not mean that addiction necessarily leads to homelessness. People with an addiction who are also poor are at increased risk for homelessness, and in some situations an addiction may jeopardize an individual’s housing. Beyond this, homeless people are less likely to get treatment for an addiction than those with more financial resources.

Children who are born into poverty may experience its impact well into adulthood. Individuals who grow up in poverty often receive less education, or education that is of lower quality, than children from middle- or upper-class families. This may result in lower-paying jobs or difficulty finding employment in adulthood. People who grow up in poverty are also more likely to experience physical, social, and mental health concerns, and this may put them at a disadvantage in life in a number of ways. Some research even suggests some children who grow up in poor households may have impaired cognitive skills.

Research also shows people who grow up poor may feel a decreased sense of control over the world around them in comparison to wealthier peers. One study found people who had grown up in poverty were more likely to give up when faced with a difficult task because they lacked confidence in their ability to achieve a positive outcome. A lack of perceived control and/or persistence may lead to difficulties with self-control, academic achievement, responsible spending, and substance use.

The effects of poverty can linger even for those who achieve financial stability later in life. Poverty can impact one’s general outlook on the availability of money and resources. People who come from impoverished households may, for example, be more likely to spend their money impulsively, often out of a fear that funds will slip away if not spent immediately, or make purchases that others might consider frivolous, to make up for being deprived of desired items in childhood. Spending money impulsively, however, can reduce the likelihood of a person’s being able to save for the future.

Reducing the Impact of Poverty

The causes of poverty are many, and there is no one solution to reduce poverty or its impact on the population. It is often extremely difficult, if not impossible, for an individual living in poverty to rise up from poverty without help, especially if they are also responsible for a family. Government assistance programs such as food benefits, low cost health care and childcare, work assistance programs, and tuition reduction programs are all designed to help individuals living in poverty achieve a higher standard of living, but funding for these programs is often limited and insufficient to help all those needing assistance.

Increased governmental assistance, further development of public transportation, and a higher minimum wage are all possible ways to help reduce poverty on a national level.

A national paid sick leave policy, as well as affordable health care that includes comprehensive mental health services and medications at low cost, would likely also be helpful to individuals who are living below the poverty line, and such services might also enable them to rise above the poverty line with greater ease.