Women and Alcohol: Why the Effects of Drinking Hit Harder, Faster 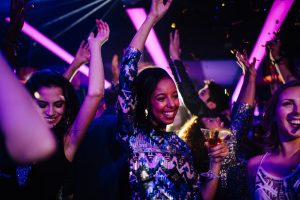 I don’t like to admit it, but it’s true: generally speaking, women can’t handle their liquor as well as men. Although there are always exceptions, research indicates women are more sensitive to the effects of alcohol. More specifically, it hits them harder and faster.

One of the main differences between men and women related to drinking has to do with dehydrogenase, a metabolizing enzyme that helps the body get alcohol out of its system. This enzyme helps men process alcohol more efficiently, allowing them to drink more and not feel the effects as quickly. Women generally have less of the enzyme than men, so more of what women drink enters their bloodstream as pure alcohol.

Women tend to weigh less than men, and on average, women’s bodies contain less water and more fatty tissue than men’s. Because fat retains alcohol while water has a diluting effect, alcohol remains at higher concentrations for longer durations in a woman’s body, exposing her brain and other organs to more alcohol.

It would seem feeling the effects faster simply leads to not being able to drink as much as quickly. However, a dangerous biological factor comes into play for females.

Females are at greater risk than males for developing serious alcohol-related physical problems. Once a drink is consumed, it goes through the digestive tract where it is dispersed through water in the body. The more water that is available, the more diluted the alcohol gets. Again, on average, women weigh less than men. As a result, women’s bodies are more exposed to the toxic byproducts the body releases when it breaks down alcohol. Thus, a female is at significantly higher risk for developing organ damage such as alcoholic hepatitis and cirrhosis. Females are also more likely than males to die from these conditions.

But the potential damage does not stop at the liver. Because women’s bodies are more exposed to alcohol’s toxins, they are more likely to experience alcohol-related brain damage and loss of cognitive function. Women who drink heavily also have an increased risk of thinning bones, falls and hip fractures, infertility and miscarriage, premature menopause, high blood pressure, heart disease, and cancer, especially of the breast, head, and neck.

While men have higher rates of alcohol use disorder diagnoses, women experience the physical damage from drinking significantly more quickly than men do. Consider a man and a woman who both drink heavily. Over time, statistically, the woman will begin to have more severe health problems within five years, while it may take 20 years for the same health issues to show in a man.

Another biological factor that affects the sexes differently is hormones. The fluctuations in hormone levels during a woman’s menstrual cycle may affect how she metabolizes alcohol. The intoxicating effects of alcohol will set in faster when a female’s estrogen levels are higher. This typically occurs just before her period.

These biological factors explain why women may become intoxicated after drinking less and are more likely to suffer adverse consequences after drinking smaller quantities for fewer years than men.

Alcohol, in a cruel turn, increases estrogen levels. A woman taking estrogen-added birth control pills will become intoxicated faster and stay that way longer. The medication slows the rate at which the body eliminates alcohol. Her hangover may also be worse than a male counterpart’s. These biological factors explain why women may become intoxicated after drinking less and are more likely to suffer adverse consequences after drinking smaller quantities for fewer years than men.

As my previous article reported, while drinking, men tend to experience more impairment in judgment than women do. And as noted above, a woman is likely to feel alcohol’s effects more quickly and for a longer period. These two biological realities can lead to a dangerous outcome: sexual assault. Each year, one in 20 women is sexually assaulted. Research confirms there is an increased risk when both the attacker and the victim consume alcohol prior to the assault.

A final way in which alcohol affects the genders differently is in seeking help. While the stigma of women drinking may be decreasing, there still appears to be stigma around getting help. Women are more likely to attribute their problems to depression, anxiety, or family troubles rather than drinking. This creates a ticking time bomb of sorts. Behavioral health care providers must be trained to look beneath the presenting issue and help women see the first step may be to address the alcohol use. Once the drinking is under control, other issues may be more easily recognized and resolved.

Due to biological differences, women, on average, experience the effects of alcohol use in different ways than men. Weight, body fat, enzymes, and hormones are all factors that increase the likelihood a woman will experience physical problems related to drinking more quickly than a typical male.

By remaining aware of their respective risk factors, women and men alike may make more educated decisions regarding drinking and ward off potential consequences.