Men and Alcohol: More Does Not Necessarily Mean Better 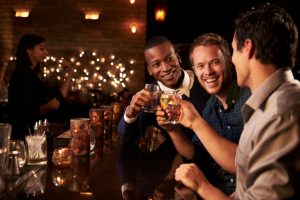 I would like to believe we are all created equal. When it comes to how the sexes respond to drinking, however, it typically isn’t so. As I was doing research for my book about alcohol moderation, I noted different amounts of drinks being recommended for men and women. Being female, I was initially offended that my gender was recommended a maximum of one alcoholic beverage a day while men could have two. This did not seem fair. But as I pored over the information and the data, I found gender plays a large role in how we consume, process, and experience the effects of alcohol.

Although there are always exceptions and contributing factors vary greatly, men’s biology generally allows them to be able to consume more. One of the reasons is men tend to have more of an enzyme called dehydrogenase in their stomachs. Dehydrogenase helps break down alcohol faster. Only about half of the alcohol the average male consumes goes into their bloodstreams, allowing them to not feel the effects as quickly or intensely. On average, men also weigh more than women, have less body fat (again, really unfair), and have more water in their bodies to dilute alcohol, all of which allows them to drink more than females without feeling the effects.

While men, on average, can drink more and feel fewer effects than women, research suggests they have dramatically higher rates of alcohol-related problems than female drinkers and are 50% more likely to binge drink. Because males tend to feel the effects more slowly than females, they may drink a larger amount in a shorter period of time. As a result of binge drinking, males experience more short-term risks to their health and safety. Men are much more likely to be injured or die from alcohol use. Excessive alcohol use also increases aggression, which can lead to more fights and potential legal issues. Men are also much more likely to complete suicide while under the influence of alcohol.

Men are twice as likely to become addicted to alcohol. A new study hypothesizes one possible reason. Columbia and Yale researchers reviewed positron emission tomography (PET) scans and found men typically experience a far greater “pleasure rush” when drinking than women do. The PET scans showed a higher release of dopamine, the feel-good neurotransmitter found in the area of the brain associated with pleasure, reinforcement, and addiction formation. When this process occurs in men’s brains, there is an increased risk of habit formation that can lead to physical dependence on alcohol.

Excessive alcohol use also increases aggression, which can lead to more fights and potential legal issues. Men are also much more likely to complete suicide while under the influence of alcohol.

Other research shows men get another important benefit from drinking: socialization. The journal Clinical Psychological Science reported that in men alcohol has a greater effect on “emotion contagion,” a process that leads to social cohesion in groups. Put simply, guys bond over drinking to a greater degree. Drinking reinforces a social reward process that leads to a higher likelihood of developing alcohol-related problems, especially if other outlets and connections are not found.

The journal Addiction also reported that men and women tend to respond to stress and drinking differently. The researchers hypothesized stress depletes glucose levels, which impacts a person’s ability to maintain self-control. When stressed, the men in the study drank four times as much as the women did. The researchers believe men under tension experience less self-control and make more impulsive decisions, increasing their risks related to alcohol. On a positive note, when the men were asked to keep track of their drinks, they cut their consumption in half, suggesting self-awareness is crucial.

More is not always better. Yes, men can drink more on average, but it comes with the price of higher rates of alcohol-related problems. Men tend to binge drink more, which increases physical and legal risks. When drinking, their brains release more feel-good chemicals and they tend to experience more social bonding than women do. This comes with a greater risk of developing alcoholism. As we become better educated about the impact of alcohol consumption, we can reduce the consequences and rates of alcohol-use issues.

Stay tuned for Part 2 in this series, which explores the effects of alcohol on women and the associated risks.